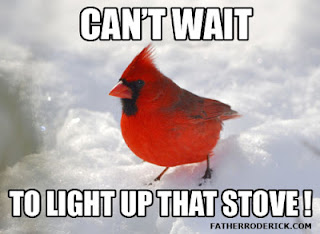 I got the breaking news while I was on the reference desk that the Conclave has been officially set to begin on Tuesday. I immediately wanted to navigate over here to this blog, but imagine this, I was commandeered by an absolute *onslaught* of panicking students needing things to take home with them over spring break. That and a community patron who had an index card full of chicken scratch that he wanted me to painstakingly interpret with him for about 30 minutes.

I was *dying* to read the Catholic news and get to my blog. So here I am. What a perfect week, spring break! Things will be quieter at work and I can stalk Sistine Chapel chimney web cams and pertinent Twitter feeds. SO EXCITED.

In related Catholic news, tomorrow Henry receives the Sacrament of Reconciliation for the first time. :) Mike and I are both accompanying him to the church, and we're taking him out for lunch afterwards.

He already has his new rosary that I got him partly in commemoration of this event, I gave them to him on the eve of Lent so that he could pray with them each night and so far we've made every single night except when I'm out of the house at his bedtime, usually Friday night belly dance class. He's been very cute about it. His Act of Contrition is all memorized and we've talked about the how-to's and why's of confession several times. We even looked at a confessional together one day after Mass.

He still seems a bit nervous about the whole thing, and insists that the teacher told him at "confession practice" that they had to use the face-to-face side, not the screen, which I find somewhat hard to believe, but we'll see tomorrow I suppose. The kids are apparently also presenting an opening program in which they sing a few sacred songs, a piece of the puzzle that Henry is not very happy about.

Well, neither can I, so I sympathize with that. Our family is not blessed with vocal abilities.

So, it's a very nice occasion and I'm looking forward to it. It's the first sacrament either of our children will have received other than baptism. I wish they still did First Communion in second grade, like when I was a little girl, but that's changed, at least in this diocese. We made our first confession right aorund now, like Henry is, but then we did First Communion right in May of the same year. Henry won't make his First Communion until a year from May. A pity. It's actually tough to bring him with me in the communion line now because he looks old enough to receive and the Extraordinary Ministers of Holy Communion keep trying to give it to him. I have to intervene each time. :)

So, a big sacrament day for Henry tomorrow. I'm just hoping to have a restful and non-tantrum filled weekend. Yes, that would be referring to Anne not myself, but I confess that sometimes in the middle of the night I have weak moments. Last night was epic, but I'm actually in a pretty good mood despite that. We'll get there.

Next week is going to be major. Let us all catch our breath now.
Posted by Tiffany at 2:42 PM