A break from the pope talk to discuss my other favorite subject: dance... 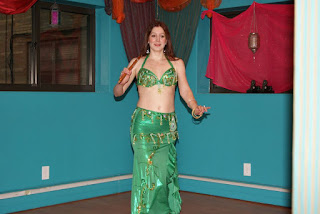 The pope's installation Mass is tomorrow, so I'm certain I'll have lots to talk about then. I enjoyed hearing his name included in the Eucharistic Prayer for the first time when I attended the vigil Mass on Saturday, and I read about his vigorous schedule all weekend long. I've been in a very happy Catholic bubble. :)

But I realized that it's been a while since I wrote about belly dance, and I actually have a few events coming up that have been on my mind, so I thought this would be a good time to write about them and figure out how I want to approach one in particular.

I haven't performed since December, which is hard to believe, time has flown! And usually, we have more performances than that. Shortly before Christmas, my troupe performed at a yoga studio's holiday party, and it was a resounding success. They loved us (it's nice to be loved :)). I always appreciate when people squeeze into a room to watch the dancers despite not having anywhere comfortable to sit. Even if  few of them were drunk.

But since then, things have been quiet. We've been busy, to be sure. After dispensing with several cane dances, we have what we're all hoping is the Definitive Cane Choreography.

Choreographies with props push the qualities of a troupe to it's very limits. At any given performance, there will inevitably be at least one member who cannot be there. When props are in the mix, missing members can have a large impact on the aesthetics of the choreography and hence the other group members need to be flexible enough to adjust the routine accordingly at the last moment. Several of our cane choreographies have been casualties of this phenomenon.

We learned one that I loved back when I was pregnant with Anne, but there was a partner section that went to pieces if even one person was out, so we didn't keep it in the rotation. Then we learned another one for last spring's hafla and that one suffered from a malady that we all can spot but have a hard time pinpointing why: it just didn't work. None of us could remember the steps with any consistency, certain parts resulted in cane-related head injuries during practice and had to be changed, and we all hated it, even Claire. I think that oftentimes the Saidi music that you use for a cane piece has a consistent beat with few "signals" in the rhythm to divide it up easily, so it was difficult for the group to remain synchronized, and for whatever reason, the combinations were difficult to memorize in the context of the music. We had to change certain combinations so many times that my brain got scrambled trying to remember from week to week what we had changed it to and I wasn't the only one having that problem. After that hafla, we never spoke of that cane piece again.

So we now have a brand new cane piece, and we just finished it Friday. It's a lovely number, quite long and capable of being divided up for different situations and time slots. The first half is veil, we learned that back in the fall. There is a point at which we tie our veils around our waists, which was quite challenging to do gracefully at first, but we've all gotten a lot better at it. Then there is a taqsim (slow) section, followed by the cane. We have a final crescendo with half the group wielding double canes and the other half (myself included) untying our veils and re-swooping them around. It all sounds very dangerous but it looks awesome.

SO, with that in place we finally have some gigs coming up. We're doing a charity event in April that necessitates us dancing on a modeling runway that I have to admit makes me just a mite nervous. Your Catholic Librarian has been known to trip quite easily and dancing on something that is only marginally stable and is raised off the ground brings out the paranoia. It goes without saying that we're not swinging canes around on the runway. We're doing the veil portion of the new number plus a drum choreography that we all know so well we could do it even if comatose. Drum = staying in one place a lot.

After that, Claire is moving to a new (gloriously larger) studio and is having a grand re-opening hafla. We'll be debuting the new cane (can you imagine the cane accidents in the tiny studio we dance in now? I assure you, they're not pretty) plus anybody can solo that wants to. As is usually the case, I want to, but yet I'm terrified all at the same time.

And so this begs the question: what type of solo should I do? In the fall, I chose to do a drum solo because I love those and I think that haflas are friendly, informal environments in which you should do what makes you happy. And drums make me happy. But I just did that, so I need to find something different.

My first thought was sword. I do love dancing with my sword, but performing with my sword is a whole 'nother animal, as is evidenced from the "Professional Debut" post on the sidebar if you haven't read that one already. It's amusing, to be sure. There may be a lot of people that I know in town for this hafla, so I'll be extra nervous. Is that a good combination with the sword? Inquiring minds want to know.

Another option is veil. My veil and I don't always love each other, so we'll put veil solo into the Challenging category. Challenging oneself is good, but it isn't always *fun* and I do want it to be fun.

The other option is to dance without a prop to either an upbeat modern tune or perhaps even a classical Middle Eastern piece. I tend to choose more contemporary music, so I could branch out in the classical realm. Hum...