Well, it was a bit of an anti-climactic first week of the Nativity Fast for our household, in that a snowstorm hit our area, and the bishop dispensed us all from our Sunday obligation as a result. 😬 In my immediate area, we didn't get as much snow as others, but we had high winds with blowing and drifting snow, making driving a touch hazardous. We were still under a travel advisory Sunday morning (and actually, our Latin rite parish cancelled all of the weekend masses, because the priest couldn't get out of his driveway to make his way over) and thus no liturgy for our household this past weekend. This also meant that we missed the parish Christmas Bazaar, which was a great disappointment.
However, I'm eagerly learning as much as I can about this preparation time for the feast of the Nativity in the East. We lit our beautiful new Eastern style Advent wreath for the first time, and since I'm flying blind over here, what you see in the photo is what I came up with. 😂 The number of Sundays between November 15th and Christmas varies from year to year at either five or six, and this year we have five. I figure when that happens, we can light the first candle at the start of the Fast on the 15th, and then light the other five on the Sundays, so that's what did this year. Thus, why we already have two candles aglow. And Monday was the feast of the Entrance of the Theotokos into the Temple, so I lit her blue candle since it was the vigil of that Great Feast! And speaking of the feast day, here is the icon: 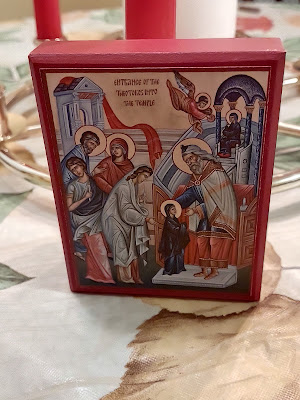 I now have this full set of icons of the Twelve Great Feasts, so we'll be breaking these out together throughout the year as the feast days come round. The next one is the Nativity!
This coming Sunday is the First Sunday of Advent in the Latin Rite, and I have to admit I'm feeling a little nostalgic for that tradition I've loved my entire life. But this has all been such a beautiful time of reawakening and learning in my faith, and I'm savoring every minute. Treasuring things from both traditions is so, so rich. We'll continue on this journey and see where it takes us at the end of the Eastern liturgical year!
How are your Advent preparation plans going? 😎
Posted by Tiffany at 5:54 PM No comments:

Twenty Third Sunday after Pentecost, and the start of the Nativity Fast 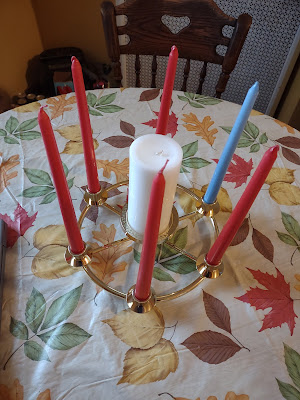 Hello all! Happy...Advent? It's super interesting living between two different traditions with regards to liturgical seasons, let me tell you. 😂 Advent is a Western Church tradition (both Roman Catholic and Western rite Orthodox) but the East has the Nativity Fast, which begins 40 days prior to Christmas, meaning that it lands on November 15th every single year. So in our Western perspective on things, we refer to this as the Eastern Advent, as it were.

We attended Divine Liturgy this past weekend like usual, and there was no mention of the upcoming change in liturgical season, although it is noted on the monthly bulletin. I'll be looking forward to seeing what changes, if any, are present in the sanctury this coming weekend, the first Sunday of the Fast. I'm going to be honest and admit that I'm not yet brave enough to research and implement the recommended dietary restrictions. Baby steps for this Latin rite gal. 😂

Although the Byzantine rite does not have Advent in the way that we are used to, there is an acknowledgement of the popularity of the Western style devotions in this regard. I purchased the wreath you see above from Legacy Icons, an Orthodox company that I love. It came with this adorable daily devotional: 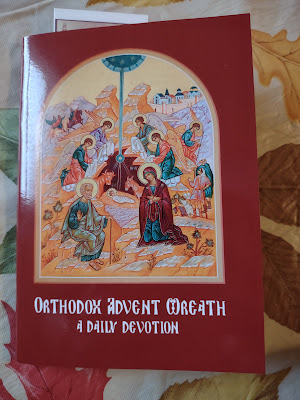 ...and it describes an Eastern take on the Advent wreath thusly (I'm summarizing):

The Orthodox/Byzantine rite has no liturgical season exactly corresponding to Advent in the West. That does not mean that there is no preparation in the Eastern tradition for Christ's Nativity. In the East, the Nativity Fast begins on November 15th, forty days before December 25th. While there is no weekly "theme" on pre-Nativity Sundays, the season is marked for the penitential singing of "Alleluia" at Matins (Morning Prayer) and other features. As time goes on, more and more Nativity-related hymnody is added to the services. The second Sunday before the Nativity is dedicated to the Ancestors of Christ, and the Sunday before the Nativity is dedicated to the Forefeast, which begins in earnest on December 20th. The Advent season was originally tied to the Epiphany (in the East, the feast of Theophany, on January 6th), with the Birth of Christ being a lesser feast. In the Orthodox West, Advent was first established in 380 as a three-week preparation for Epiphany. Inspired by the development of Lent, by 581 Christians in Western Europe began the Advent fast on Matinmas (November 11th). In other places a period of five or six Sundays was established. After the schism, this was reduced and standardized throughout the West to four Sundays.

The Advent wreath originated among German Lutherans in the sixteenth century. Over time, it became a staple of Advent devotion throughout Western Christiantity, both Protestant and Roman Catholic. While the Advent wreath devotion has no connection to Orthodox/Byzantine rite Christianity, it is deeply ingrained in Western culture. The Eastern forty day Advent season can fall over the course of five or six Sundays, so the focus is on daily rather than weekly devotions (scripture readings, prayers and feast days). It's a private devotion devised to count down to the Nativity. The candles are colored according to the traditional colors of the liturgical season: red for the Nativity Fast, and one blue candle for the Entry of the Theotokos (one of the 12 Great Feasts, and that actually is coming up quite soon!).

I'm quite excited for this coming Sunday! The Christmas Bazaar is also scheduled for this weekend, but we're getting a bit of a snowstorm in this area over the course of the entire weekend, so I'm not entirely sure what will happen with events such as this. I'll keep you posted!
Posted by Tiffany at 2:46 PM 1 comment: 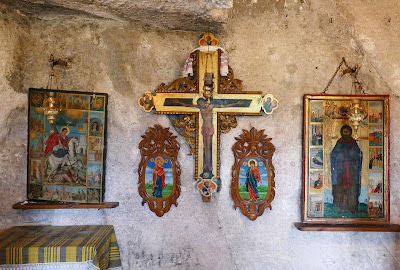 Welcome back everyone, and ooooo, we're getting EVER so close to the start of the Nativity Fast in the Byzantine rite! This begins November 15th, so next week I'll have a bunch of information on that to share with you!
This week, we just had a lovely late fall visit to Divine Liturgy at our adopted Byzantine rite parish. The kids and I have adopted a happy rhythm of getting and ready for 9 am Divine Liturgy, socializing with the small English language congregation after the liturgy out in the parish hall, and then going out for coffee afterwards. I like it very much, and the kids are definitely at home there. I do miss our other parish, and the Latin rite devotions over there, to be honest. Between the 2 liturgies, I do prefer the Byzantine rite. But I'm not certain that I feel at home in the overall Ukrainian Catholic Church, if that makes sense. Everyone makes us feel welcome there, to be sure. But I might just be a Latin rite Catholic through and through. A Latin rite Catholic who also is intrigued by, and enjoys, Eastern Catholic liturgy and traditions as well. And as a Catholic, I am free to explore both, which is wonderful to behold! I still don't know where all of this is leading, and I want to assure that I'm shepherding my children in the way that God wants us to go. But I have faith that we're on a path and I'm going to keep moving along it, keeping my ear open for the call.
The Christmas Bazaar is next weekend, so I have a new crocheted blanket that I made all packed up and ready to go for the basket raffle. I'm also going to see if Anne and I can put another basket together before Sunday, which is when we'll bring the items to the parish hall to be set up for the following weekend.
In the meantime, I've dusted off my Eastern Advent devotional A Monastery Journey to Christmas, which I wrote about last year, and I'm sooooo looking forward to diving in again! Lots of great Advent content is coming, let's get excited! 😎
Posted by Tiffany at 10:56 AM 1 comment:

Hello all, and oof, how is it November already?! Our time together in this Byzantine liturgical year is flying by, it seems. But we're speeding mightily towards Advent/the Nativity fast, and I'm ever so excited about it!

This past Sunday was our final week of Divine Liturgy for October, and it was a beautiful day. This week I finally encountered something I had been wondering about: as the congregation was reciting the Nicene Creed,  someone said the filioque clause aloud:

Now, in our Byzantine rite parish this part of the Creed in our little missal books looks like this:

"...and in the Holy Spirit, the Lord, and Creator of life, Who proceeds from the Father [and the Son]. Who together with the Father and the Son is worshipped and glorified, Who has spoken through the prophets..."

It's a subtle difference in terms of the actual text, but a MAJOR one in terms of theology, and it is also something about which I do not have a lot of theological background knowledge. I have to admit, I'm quite curious now and intend to do some reading up on this. It is, after all, part of the reason for the continued division between Eastern and Western Christendom, sadly.

When we started attending the Divine Liturgy in the Byzantine rite, I knew about this issue, and noted right away that [and the Son] was in those brackets. So I correctly assumed that the congregation would not say those words aloud, and in fact they did not. This is how it is every week during Divine Liturgy, but this week we had a visitor in the congregation who is almost certainly a Roman Catholic. I hope he didn't feel bad, it's an easy thing to do when you're so used to saying the words, and nobody batted an eye. Plenty of Roman Catholics attend the Byzantine rite Divine Liturgy. In fact, my first thought was:

But it drew my attention to this very important issue. Research upcoming!

I don't know that I can mentally make this shift. 😂 I so very much associate November with All Saints and All Souls! My sister Shauna'h put together a free Hallowtide retreat which I went through, and I diligently prayed my Liturgy of the Hours each day. LOVE. I mean, truly LOVE. Our Church is so rich in her traditions!

Do you have any special traditions surrounding the feasts of All Saints and all Souls that you participate in each year? Feel free to leave a comment!