All! I'm so happy to be with you today! :0 In the midst of a super stressful season, this past weekend was a welcome, and delightful respite. I'll get to the fun dance stuff in a moment, but the weekend began with a sick day on Friday, as Anne was up coughing overnight and neither of us felt well in the morning. I called in sick and kept her home from school. I also called the pediatrician and got her an appointment, just in case her persistent sore throat was the sign of something more serious, but nope! Just the common cold. :) The peace of mind is good to have though, I'd rather know what I'm dealing with. As the day wore on, it was quite apparent that Anne was beginning to feel a lot better: 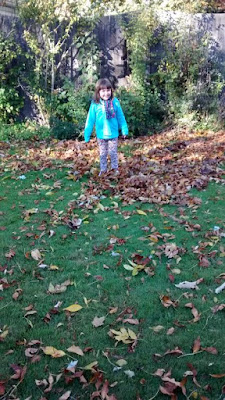 Jumping in leaf piles certainly seems to me to indicate that a child is feeling more like their usual energetic self, no? But it was a nice, and needed, day of rest for both of us. We even took a nap together. *heart*

I've also been working on some winter-themed jewelry now that the temperatures around here are more commiserate with autumn, and came up with these delightful snowflakes: 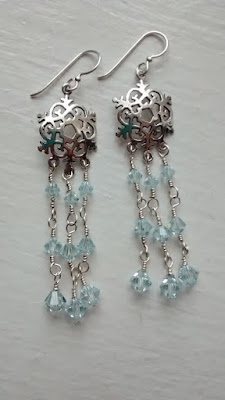 I love them, don't you? :) Yes, in fact I WAS distracting myself quite a bit on Friday, because I had THE THING on Saturday, and occupying my mind is one of my coping mechanisms for managing stress. OK, long story, and a couple of soap boxes to follow. This actually got so long as I was writing that I'm dividing it up into two posts. Today's installment contains some background information on my big night Saturday. Tomorrow I'll let you know how it went, so make sure to stick around for part 2!

OK, let's get started. You have your tea? Good. Saturday morning dawned an absolutely spectacular fall day here in WNY, and I was in full-on crisis mode, in a positive sense. I knew that I had to be at my best, and that I couldn't allow myself to panic. See, here's the thing: I'm SHY. People scoff at this sometimes when I say that, because, you know, I teach. I'm a belly dancer. How could I be shy?! I knowingly put myself into situations in which I'll be up in front of a group of people, and they'll be watching me, and shy people don't do that, right?

Shy people generally want to avoid such situations, yes. :) I'm certain you can feel the "but" that is about to come. BUT, that's not to say that shy people don't want to challenge themselves sometimes when it comes to things that they love. I love dancing, and I love helping people, and that's where the performing and teaching come into play. I think that it's important to understand deeply rooted parts of ones' personality, such as being shy. And in contrast to comments I sometimes hear, I don't see shyness as a bad thing at all. It is what it is, you know? You can't make someone NOT be shy, it's who they are. On the other hand, you can encourage them to come out of their shell sometimes, because life can surprise you and be glorious when you do. And so that's how I got caught up in this whole belly dancing thing. ;-)

And so here was the situation, which I didn't detail beforehand out of fear that it would make me even *more* nervous than I already was. Last month, my instructor, Claire, contacted me about a professional gig that she could not take due to being out of town on the weekend in question. It was for a dancer to perform at a surprise birthday party. VERY IMPORTANT SIDE NOTE: I know that belly dance sometimes holds a negative association for people who think that this dance form is inherently (I'll just say it, we're all grown ups here) sexual, and thus inappropriate for most audiences. I am here to assure that it is NOT. Does the history of belly dance have some unsavory moments, and do some dancers portray it in an unflattering (even scandalous) light? Yes. But that applies to MANY other dance forms besides just Middle Eastern dance, including ballet. There are *plenty* of dancers out there who simply love the foundational dance form and aim to portray it in a beautiful and elegant way. A professional belly dancer *should* (I know there are exceptions, unfortunately, but this is the standard):

(1) interpret the art form as best she can in it's proper cultural context.

(2) present the art form in a tasteful and graceful fashion that is, without exception, family-friendly and appropriate for all audiences.

(3) wear a professionally designed, properly fitting, costume during performance. This may or may not reveal her belly, depending upon the decision of the dancer and the audience for whom she will be performing. When not performing, the dancer will wear a drapey cover up over their costume to preserve the unique drama that performance brings.

(4) act in a professional manner throughout the planning process leading up to the event, and the event itself.

(5) NEVER embarrass someone by coercing them up to dance when they clearly do not want to, or otherwise make a person ill at ease in front of their guests.

(6) ALWAYS refuse to dance at an all-male event. Belly dancers are paid entertainers for family parties and weddings.

All right, I feel better now. Do you?! :0 I just think that it's important to be candid with what I'm talking about when it comes to my love of Middle Eastern dance. I get a lot of side eyes about the whole Catholic belly dancer thing, and I feel that it is my responsibility to let people know that these things are not mutually exclusive from either a moral or modesty standpoint.

OK good, we've covered that part. :) So, the birthday party gig. Claire couldn't do it, and asked if I would. She said I was ready for this, and that she had every confidence I would do a great job. Her confidence meant the world to me, but, to put it mildly, I was very trepidatious. :) A few years ago, I split a professional gig with Claire at a restaurant, and found the experience rather draining emotionally. Besides troupe gigs for which we sometimes get paid (charitable events and festivals excluded), that was my only other professional experience. And to boot, I would be the only dancer there. These are totally solo gigs.

All of this added up to the experience feeling rather intimidating to me.  But I thought it over, and realized that if I didn't take it, I would be disappointed with myself. I don't want Shy Tiffany to always win, you know? Although hiding out over at Shy Tiffany's place is certainly more comfortable, it's a lot less exciting. ;-) Claire assured me that the woman who had called her to book the gig was extremely nice and that the gig would be super easy for me. 12-15 minutes of dancing: swirl in with your veil, see if they want you to balance a prop, dance to a fun, upbeat pop song and a drum piece, and that's it, you're done. The fact that it was a surprise party made me a little nervous, because it seems to me that the potential for it to be awkward is a bit higher :0 and introverts avoid awkward social situations like flesh-eating bacteria. But all in all, everything seemed positive about this gig, and when I took a step back, I realized that I've been studying Middle Eastern dance for nearly 8 years. I could handle this, if I just gave myself a chance. Meaning, if I could manage to stifle Shy Tiffany and lock her away for a little while.

I spoke with the woman booking the gig, who was, as promised, extremely kind and pleasant to work with. With their family and friends, she was planning a surprise birthday party for her husband. She could not have been easier to deal with, just asking me to come and dance at the party and to balance my sword, because that sounded really cool to her. We got all of the details worked out, with a contract and all of that good stuff, and then I had to wait and prepare. With a knot in my stomach. For the past 5 weeks. :0

And prepare I certainly did. I carefully curated a playlist of fun music that incorporated different tempos and rhythms, and with which I was very familiar, to make for easier improvising. I planned a veil entrance, an upbeat but traditional Middle Eastern piece, an even balady for the sword, and then a drum solo.

I practiced A LOT. I ran though the music, improvising my little heart out. I worked with Sword quite a bit, and developed a new way of getting him balanced on my head that was working much better. Sword has been on probation since our little incident at the art festival this summer. :0 I really didn't want to bring him, but it was a special request, so I couldn't exactly refuse.

Practice went great, and the big day quickly approached. Let's circle back to Saturday morning. I was feeling ready, but NERVOUS. I projected calm into my brain as best I could and faced the day. How did it work out? Come back tomorrow for part 2 and all the fun details!
Posted by Tiffany at 3:54 PM