Well HELLO there, dear reader! This was a big weekend for me, and big weekends call for big blog posts. Do you have your tea or coffee (or wine, beer, or cocktail, depending upon when you're reading this :))? Let's settle in for some dance fun!

This last weekend in July is my studio's biggest performance weekend of the year. It's at a local art festival, and we dance two sets per day on both Saturday and Sunday. It's a wonderful, wonderful experience, and we receive a lot of positive feedback from the event organizers that the festival-goers love the dancing portion of their entertainment block. So, during our sets, this entails the following: my troupe, performing modern Egyptian dance (what most Americans refer to as belly dance) and folkloric dance (our Saidi cane pieces, Claire performed a Khaleegy dance this year, and our Shaabi number), a ballroom dance group (who performed an absolutely *fabulous* swing piece), a Colombian troupe, and assorted other solos and duets amongst these groups.

The lineup this year was pretty ambitious, and I learned on Friday that the solos were slated for both days, rather than just one as we originally though. *gulp* A lot of dancing was in store, and as is usually the case here in late July, it was going to be hot. Hair and I prepared ourselves.

I loaded up my car with my various and sundry props and costumes, and headed out to meet my troupemates.We got ourselves all ready in the stuffy dressing room, and set out to dance. The wings/tray balancing piece was first, and it went decent. Given that the stage is rather small, and has a roof, the fact that it went OK (with taller people wielding giant iridescent wings) is a pretty significant feat. There were a few other numbers, and then my solo. In an ominous omen, I was feeling decidedly sick to my stomach. I was drinking water, and had eaten before I left, but I still did not feel 100%.

And so Sword and I were pretty nervous as we went on stage. The beginning went great. Snort! Isn't that always a frightening way to start an anecdote? My pre-balancing swooping went without a hitch and I was as ready as can be for the balancing.

But here's the thing: I was overheated and feeling a little woozy. I was also up on a stage, which is not usually the case when I dance, and somehow that vantage point felt much more intimidating to me. And it was a little windy, which usually isn't a problem with Sword, but all of these things together?

I had The Moment. That moment as a performer when you balance your prop, and right in a single instant you know that it's not perched properly. I got Sword up there, and the audience actually started applauding wildly, and I'm thinking:

Yes, Dancer Tiffany isn't so delicate within the safety of her own head during a Panic Worthy Dancing Moment. I'm shimmying away, but I know that as soon as I start actually dancing, things are going to get dicey. And so what did I do?

Well, a few things, I'm nothing if not resourceful. ;-) I've learned a few tricks in my years, and one of them is to just try to fix the problem and make light of it to the audience, rather than continuing to dance in fear. I did my best: "Oops, oh well!" face to the audience, and adjusted Sword. I also chose that moment to focus much less on my dancing (which had to be MUCH more careful than usual anyway due to the situation) and instead focused almost exclusively on smiling with MY WHOLE FACE. I've noticed that when a dancer looks happy and confident, the audience looks happy and relaxed, and doesn't seem to notice the crisis that you're trying to distract them from so much.

And I will tell you this: It works! Act like you know what the hell you're doing, and other people believe you, HA! So I beamed at everyone like this was the best time I'd ever had in my entire life, all the while wondering if my *freaking* music would EVER END. I had adjusted Sword, but I had managed to adjust him from Wrong to: Still Wrong! I had no choice, I had to adjust him again, and for my efforts got a scathing response from Sword:

"GIRL! STOP MESSING WITH ME!"

"But you're not on there right, and I'm tired of doing the gentlest shoulder shimmies KNOWN TO MANKIND!"

All the while, I beamed so hard that my face muscles started to hurt. The audience beamed back at me, so my subterfuge appeared to be working, but let me tell you, that was the most creative I've ever had to be while dancing, and not in a good way. :0

The music mercifully came to an end with Sword still on my head, and I received a hearty round of applause, but Sword got a stern talking to back in the dressing room. He was *squirrely* for that performance, and while I'm glad that I was able to salvage the situation, I don't like for my solos to be quite that stressful. I stuffed him into a corner while I changed for the rest of our group numbers...

...which went well, albeit with me looking a bit like Roseanne Rosannadanna by the end of the afternoon...

LOTS of heat and humidity to deal with, to be sure. I did manage to have a good cane balancing day during our Saidi piece, which was pleasing.

And Sunday? Was HOTTER, unfortunately. Thus, I made a bold choice. I collected my garment bag, got my bag of props out of my trunk, and left Sword in there. I could feel his resentful stare as I shut the trunk right over his face, but I just wasn't in the mood for him on Sunday. Plus, we had to do quite a bit of walking and schlepping of all of our stuff over to the stage area, and carrying a heavy sword on top of everything else wasn't the best idea I'd ever come up with. I brought my pink silk veil and felt all unfettered and free.

Our set started with the wings again on Sunday, and that went well again aside from me forgetting one small portion of the choreography and moving to the back of the stage much earlier than everyone else, oopsie! I'm hoping it looked like I meant to do that. ;-) Over the course of a fantastically long weekend like this one, every single troupe member had at least one brain lapse like that, it's just part of the human condition. Then we had one additional group number on Sunday prior to my solo.

Hence, I was good and soaking with sweat prior to the solo. I went into the dressing room to quickly cool down in front of the fan, and got back outside as Claire was introducing me. :0 I thought there was another number in there before me, but apparently there had been a last minute lineup change. Veil and I silently exchanged a swear word in our heads as we dashed to the stage.

No time to panic, which was a good thing. Veil and I swirled out:


...and it was one of the most enjoyable solos I've ever danced. I felt all happy to not have to worry about the sword, and it was wonderful to just dance as I truly wanted to without the encumbrance of a balanced prop. I also learned an important lesson from Saturday: dancing solo is about so much more than simply dancing. It's about *performing* and bringing your audience into the experience of your dance. I was improvising anyway, so I just let my body rely on its muscle memory and movement vocabulary, and focused on my face. I smiled and smiled, and this time because I genuinely felt happy. ;-) 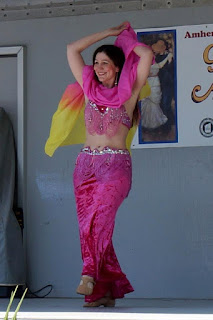 I used Veil through a fun spin sequence in which I wrapped myself in it like a cocoon (add this to the possible news stories of belly dancer tragedies: (1) impalement by sword, (2) suffocation by silk :0) 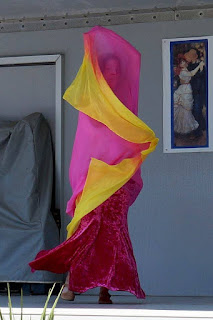 ...and he was *such* a good little prop and didn't stick to my sweaty arms at all as I was fearing. He behaved perfectly for the full span of music that I wanted him for, and then I dropped him at the back of the stage to finish the piece prop-less. It was glorious.

Later, when I got back to my car, I could feel Veil's smirky expression when I opened the trunk:

"So, Exalted Pointy One. Who is the favored prop NOW, hummmmmmm?"

I don't want to encourage this little turf war, but props really do have big personalities. ;-)

And the rest of Sunday went equally well. Hot, did I mention that we were hot? And tired. By the second set on Sunday, we were all low on steam, but we barreled on together. I feel SO BLESSED to dance alongside the women in my troupe: 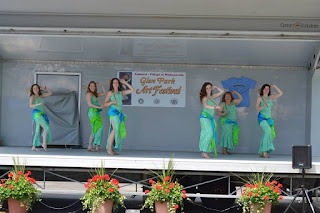 Dancing with them has changed my life. It is an honor to perform with them.

When I think back to the timid little girl I once was, it's hard for me to believe the way that my life has turned out, with performances and teaching, and generally being up in front of people fairly regularly. It's not that I don't get very nervous and anxious about such things - I do, A LOT. But I've learned that that simply means that I CARE. A lot. About doing the things that I love and am passionate about with sincerity and intentionality. I'm never going to be the best at any of these things, but I can do them with my whole heart.

What are you passionate about, dear reader? Do you have a fear of public speaking or performing that you've been able to work through such that you can do it when necessary? Please write in with all the details. :)
Posted by Tiffany at 11:00 AM