"Ow, what is that horrible pain behind my eyeball?": A Catholic Librarian July weekend of traumatizing first swim lessons and last chance Masses...

Well, happy beginning of the week to all of you, and I hope that you are well! I had a really, really nice weekend, if a bit more adventuresome than I was planning. What did that all entail, you reasonably ask? Grab your beverage, let's settle in: 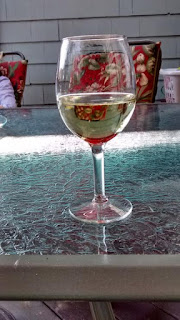 Again, that's not what I'm drinking right now, but it's what I was drinking Saturday evening, and that spills over into a part of the story Sunday morning that gets a little bit embarrassing. :0 But that's what I'm here for, right? Entertainment for you all by my own somewhat ill advised foibles. Let's start back on Friday evening, since that is when all the fun began...

*soundtrack begins playing in the background*

Speaking of which, I wish I had a soundtrack, just like in the movies. It would make the mundane parts of my life seem so much more interesting and dramatic, but I digress. Friday evening I had dance rehearsal, and as expected, things were good-naturedly intense as we ran through our set for this coming weekend's performance, plus shook the dust off a few choreographies that we'll using for the following weekend's festival. Everything went well, but I discovered that executing Isis wing-laden barrel turns when you're nearly 5'7" isn't such a good idea with a drop ceiling looming overhead. Thankfully, nobody was hurt. :0

We have one more rehearsal this coming Friday before the performance Saturday, and it looks like the solos will fit into the set, so I just sent Claire my music. Eek!

I dance best when I don't think about it too deeply beforehand, so let's move on. ;-) Saturday morning I traveled with Anne to our local YMCA for her very first swim lesson. Anne was sporting her new Elsa and Anna bathing suit and was very enthusiastic about getting into the pool. Until we got there, that is.

As I was strapping on her flotation device, I had a bit of a sinking sensation. She had The Face, kwim?

"It's going to be OK, Sweetie! It'll be fun! See how the other children are all getting into the water?"

"You're doing great, Sweetie! Try to pay attention to the teacher."

I glance down at my phone to answer a text.

"Mom." Henry is beside me. "Anne started crying."

The instructor swam over to try and convince Anne to make a pass across the shallow end with the kick board. Let's just say that didn't go over very well.

It was a long 30 minutes, and I retrieved her trembling form from the water and quickly engulfed her in a towel.

"Next week will be a little easier, Darling. Let's head to the girls locker room to change."

Who here is surprised?! You're obviously new to this blog. ;-) Welcome!

The changing room situation was offered up to get quite a few souls out of Purgatory, I'm thinking, and by the time I had wrenched her clothes onto her damp body she was declaring that she was never coming back.

Henry, however, saved the day. When he first suggested the ridiculously priced vending machine I was skeptical, but I will say that Anne immediately stopped crying, and they bonded over choosing what to get. After that, she was fine, and said she would try again next week. I'll take it, and it only cost me $2.

Saturday evening we had a cookout with some friends who live on the next block. They have 4 children, and another couple was there with their son who is Henry's age, so we had a nice little gaggle of children to play together. Anne and their youngest daughter, I swear it, look like twins:

They hung out together nicely, along with the other girls, and we just made sure we had the right little brunette with us when we left to go home. :) As for the adults, we hung out by the side of the pool munching, chatting and having drinks. That's when I drank the Chardonnay pictured above. And I really didn't drink that much.

When out having drinks with others, I usually have 1-2 drinks. Saturday evening I had a bit more than 2. OK, nearly 3. :) But it's not like I was drinking out of a glass the size of a fountain, it was a small white wine glass. And I also ate dinner.

I get up, swallow an ibuprofen, and go back to bed. I toss and turn and accidentally wake Mike up. We both drift back off...

7:30 am. Hark! Why am I awake?! Well, because both children are now up and being noisy. And Mike is getting out of bed. Oh, thanks be to God, my head feels decidedly less bad. Let me get up too...

Oh dear. A distinctive nauseous feeling pervades my being that I have only experienced once before, and vowed would never happen again. Apparently, I don't learn lessons very well. Oh that's right, I already knew that. *sigh*

I laid down again and pondered my fate. I didn't drink *that* much wine, but I wasn't also drinking water or another non-alcoholic beverage, and that was my fatal mistake. Dehydration. It's good that I have this lesson more firmly tucked into the front of my brain, but it wasn't making me any less miserable as I lay there. Mike was downstairs getting breakfast for himself and Henry, not yet realizing my situation. I managed to make my way into Anne's room and get her up. She didn't make things easy and refused all of the outfits I presented, and I was in no condition to wrangle her. I left her to dress herself, and she actually did it. God is merciful.

I laid for about 30 minutes and then was able to go downstairs and have some water and coffee. But by this point it was nearly 9 am and something was becoming alarmingly clear: I still felt awful and was in no condition to take the kids to 10 am Mass. Because I had a hangover.

Mother of the Year, right over here. Don't I get something special from Things Remembered to commemorate this occasion?

It was mild as far as hangovers go, but all the same. Henry was also faring poorly, having a bad sinus issue unfolding, poor kid. I watched TV with the kids as we all took it easy and Mike worked on his lesson plans. I drank my coffee and knit. By about 11 am, I was feeling a lot better. Henry was still looking peaked and stayed home with Mike, but I made myself presentable and took Anne to noon Mass with me. It was lovely, and I felt even more grateful than usual to be there. :)

Later, I worked on a cowl using some new silk yarn that I recently procured from Expression Fiber Arts with the delightfully titled colorway "Twilight Under the Stars": 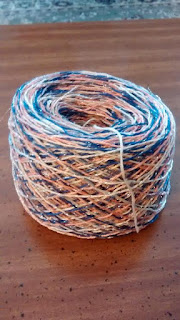 Isn't it magnificent? A perfect late summer colorway, if you ask me. Aside from the self-inflicted morning situation ;-) Sunday was beautiful. Mass, then meal planning with Mike for the week, then dinner out with the whole family for sandwiches and ice cream, and then a movie with Mike and Henry while I knit. Life is good.