"Mooooooom, is Mass going to be shorter because it's the summertime?!" Catholic parenting adventures on the 16th Sunday in Ordinary Time...

Happy Monday all! You're probably wondering how my dance event went, since I talked about that nervously on Friday, and I promise a full and fun recap tomorrow. Lots of amusing anecdotes! And I have a few photos to share. I thought first I'd talk about the rest of the weekend, as this was a jam packed one for my family! Got your tea or coffee? Let's settle in!

Saturday dawned with Anne's swim lesson on the agenda. Given her reaction last week I was apprehensive, but apparently the allure of the post-swim lesson trip to the vending machine won out, because she happily went and did much better: 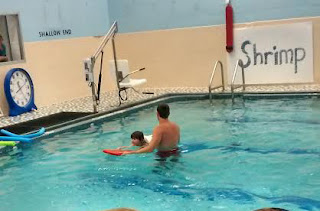 Yes, that is her, *actually* following directions and using the kick board!

She did MUCH better, and looked absolutely adorable in her Elsa and Anna bathing suit participating in all of the drills that they did. Ten 4 and 5 year olds clinging to the side of the pool waiting their turn to swim across is a very cute sight indeed. So that worked out awesome.

Saturday afternoon was the artisan market that my troupe danced at, and as promised, a full post on that is coming your way tomorrow. I'll just say that Saturday was one of the hottest and most humid days of the year so far, so let it be known that much discomfort was had by all dancers. But dance on we must!

Saturday evening, Mike, Henry and I had tickets to see our local minor league baseball team play (the Triple-A affiliate for the Toronto Blue Jays, if you are into such things :)), and it was their annual Star Wars night. It sounds like an odd combination, but it really works. People dress up, a special video series plays on the big scoreboard between innings, and the players' photos are substituted for Star Wars characters. After my tiring afternoon of dancing, it was stupendous to relax and enjoy the game, eat a hot dog and have a beer. And they had a craft beer kiosk with a decent selection of local beers. Boom.

After the game, there was a light saber show and fireworks, check this out: 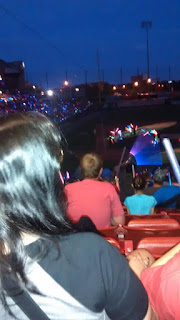 Not a great picture, I know, but it gives you an idea of how many people there were wielding light sabers. All of those blue and red lights in the stands along the side are light sabers. Very, very fun.

Sunday dawned with me looking forward to a quieter day. And for the most part, that happened. Sunday mornings are my favorite of the week, but sometimes the kids make those tough:

And that's pretty much what we had going on this particular Sunday morning. Then, when it was time for Mass, Henry claimed to not be feeling good again. Let's insert a groan here, shall we?

Henry is 9, he'll turn 10 this fall. It's the age, right? The age causing the reluctance to go to Mass, because "it's so boring!"? I mean, I know *I* felt that way as a kid, and I guess it was around that age, though it did start younger, which is the case for Henry as well. It's not easy to deal with, but I do my best. And happily, this is another instance of Mike being super supportive and backing me up about Henry attending. Per the two of us as a united front, Henry *will* go to Mass. But it certainly makes me feel bad when Henry expresses these things, and I wonder about the best want to handle it. Suggestions?

Given that Henry's "ailment" came on so suddenly, he did not get excused from Mass. He came with us, and very unhappily so. Much whining and complaining in the car commenced. Luckily, our parish is only a few minute drive away, so my torture did not last long. When we arrived, after an excruciating extraction from the car, Henry was fine. He was polite and even reverent. But then Anne kicked in.

Children's Liturgy of the Word is on hiatus for the summer, so she's with us the entire time.

The INSTANT our butts hit the pew:

"Mommy, I have to go to the bathroom."

*universal Dance of the Pee Pee*

Thereafter commenced 45 minutes of jumping, wiggling, climbing and all around non-stop activity that drained me of any scrap of energy I had left.

So, you could say that it wasn't one of our easiest weeks at Mass. :) But we persevere! For those of you out there with suggestions on how to tackle this issue of kids not wanting to go to Mass, I'm all ears. Let's discuss in the comments!
Posted by Tiffany at 11:11 AM