I'm not yet able to get too much done on the future nursery (next month, during Mike's spring break, we have plans for painting, carpeting, and furniture moving) so instead of using my nesting energies in that direction, I've turned to knitting and baking. This has been a very harmonious obsessive compulsion if you ask me.

On Saturday, I decided to bake a cake. Now, those of you faithful readers that have read my blog for any length of time know that my baking abilities border on scandalous. I simply don't have the Betty Crocker gene. But lately, I've been trying more. And my precious Henry spotted a particular cake in one of my cookbooks and specifically asked that I make it. I mean, how can I resist that?

It was a nice simple recipe from a cookbook that touts itself as being for the "busy family." The recipes are all designed to be crafted in approximately 30 minutes, great for weeknights. This cake was simply a white cake mix combined with crumbled Oreo cookies, and frosted with a thick homemade cream cheese frosting. I was a little afraid of the frosting, but I figured that if I screwed it up, I could just go buy a can. Sad, so sad.

But at any rate, we embarked on the cake, and as always I immediately got tense. Baking just brings out the worst in me, but I'm trying to fight these demons, I swear. Mixing the cake was pretty easy, and in it went into my bundt pan. I was a little anxious when it didn't appear to be fully done when the allotted time elapsed, but I refused to panic. Back in it went (several times), until finally, my toothpick came out clean.

Then came the frosting. I was brave I tell you, very brave. I popped the cream cheese and milk into the mixer. Hank swirled it about. The texture seemed odd, but that's par for the course with my baking. I slowly added in the heavy cream and confectioner's sugar. Away it spun. And spun. And spun. And once again, my product looked like soup. Delicious, calorie-laden soup, mind you, but soup all the same. The directions said to mix until the soup became "stiff peaks." I won't even tell you what went through my head when I read that.

Dejectedly, I let Hank monitor the soup while I washed out my measuring cups. When I returned to the table, I swear it, a miracle worthy of a saint canonization had taken place. My frosting was FLUFFY and PEAKY. One would have thought I had just turned water into wine based on my reaction.

I immediately tasted some, and it tasted GOOD! Rather than, I don't know, ODD. I let it spin a bit longer until the peaks became their stiffest, and turned the mixer off to admire my work. I slapped it on the cooled cake, and voila! My masterpiece: 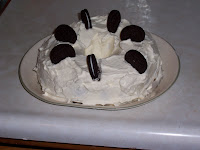 I am super, duper proud of it. Hank loves it, and we all snacked on it during the super bowl. Life is good.

In my other efforts, I've been making baby hats like the apocalypse is approaching and every baby I know is relying on ME for their head warmth. I've been very productive on those. I'm about to start a show stopper baby blanket, more on that later. But once again, I've been bitten by spring fever.

Every February/March, I start to become obsessed with spring and Easter-themed crafts. I mean, I just can't get enough. I'm currently making a shawl in a yarn called "first spring ombre" and just printed off patterns for crocheted Easter eggs and knitted Easter dishcloths. What on earth does anyone need with a bunny adorned dishcloth? I have no notion, but if I know you, you're getting one this Easter. Or would you prefer a lamb? Or an chick? Because I'm going to make those too. I LOVE them, and this seems like a great way to use some of the cotton yarn I have in my stash that I swear on my life is reproducing in my little storage totes. I've got all the spring colors! Variegated too!

March is National Craft Month, so watch out! Lots of coupons at JoAnn's = very dangerous situation for the Catholic Librarian...
Posted by Tiffany at 3:09 PM