Of winter storms and exempted Mass obligations on the 6th Sunday in Ordinary Time...

Monday. And here I am, all freed from my house, WOOOOOOO! :0 The time with my family was good, don't get me wrong, but there is something psychologically difficult about feeling like you *can't* leave. Rabid claustrophobia, anybody? At any rate, how did this all go down, you ask?

Well, before we even get to the weather, let's talk about my poor, poor darling husband. In the 12 years that I've known him, I have never seen him as sick as he was this weekend. I had mentioned on Thursday that he had been very sick the night before with what we believe was the flu, so I stayed home to take care of him (and Anne, who he would have otherwise been handling alone). He was *very* sick on Thursday, but seemed to get a bit better as the day wore on. Friday, he was still pretty sick, but again, the worst seemed behind us. Then Friday night hit.

I was once again woken by a shivering, feverish, coughing Mike. This was a setback, and we realized that he was going to be down for the count for probably a full week when all was said and done. And Saturday morning dawned with a blizzardy looking snowfall. Mike was scheduled for play rehearsal (he has a lead role in the local community theater's upcoming production of Agatha Christie's The Mousetrap), I was scheduled on the reference desk in the afternoon, and the entire family was invited to a birthday party in the evening that we were all looking forward to. Well. :)

Play rehearsal was cancelled, the reference desk closed, and travel advisories issued by our county. The party was still on, but we let the hosts know that we couldn't make it. Not only were the conditions a bit dicey, but there was no way we could get out of our driveway. Mike was far too sick to be able to shovel the snow, and I'm going to just admit that I'm *terrible* at shoveling snow. I try, I really do, but lack the upper body strength to make any sort of difference in a timely manner. We were stuck.

As all of this was transpiring, the weather forecast was predicting record low wind chills for Sunday, between 20 and 30 degrees below zero. Soon thereafter, I saw announcements by our diocese on social media that the bishop had lifted the obligation to attend Mass this weekend due to the dangerous weather conditions.

I was sad, but I knew there was no way we could make it to Mass. I shouldn't take the kids out in that sort of cold, plus the driveway was an *entity* at this point. Mike does not sit still very easily, and by Sunday he was anxious to start doing things again, but I gave him my stern librarian face. He was still coughing and pretty weak. He should NOT be outside in those conditions shoveling snow.

So we stayed in. Did I mention that I was sad? Because I was. :( We put the EWTN Mass on, and I managed to get both kids to sit still for two decades of the rosary. Anne now has the Hail Mary memorized, and my Catholic sensibilities just sing when I hear her recite the prayer. #cutie! But not being able to receive the Eucharist? That's a big deal, and it made me appreciate the privilege anew.

After that, I did a LOT of crocheting of a giant wool afghan, for obvious reasons: 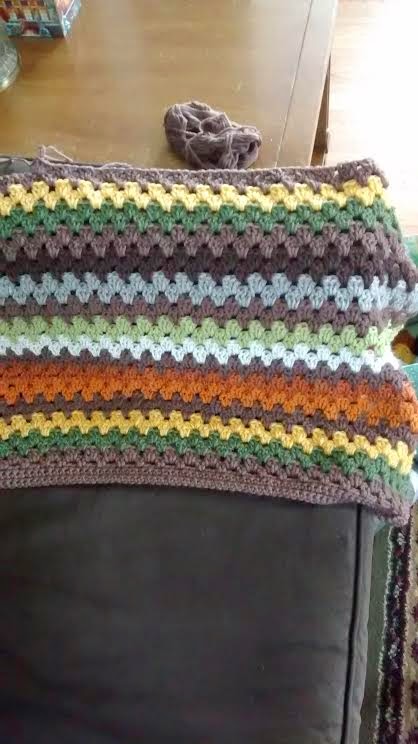 I love how it's turning out (autumn forest theme ;-)). But seriously, I need ALL THE WOOL. ALL THE TIME. It was so cold yesterday, that I was wearing long underwear underneath my other woolen layers IN THE HOUSE. IN.THE.HOUSE. My hands never fully warmed up such that I actually started to worry and contemplate wearing gloves. I usually don't mind winter, but this year, even I, your resident Winter Evangelist, am sick of it.

The dangerous wind chills continue today, and all week will still be well below normal for us. Sunday we're projected to go up into the 20's, Fahrenheit. We're all reacting to that as if a giant sun beam has come down from from the very beaches of heaven.

In other news, I made Valentine cupcakes with the kids: 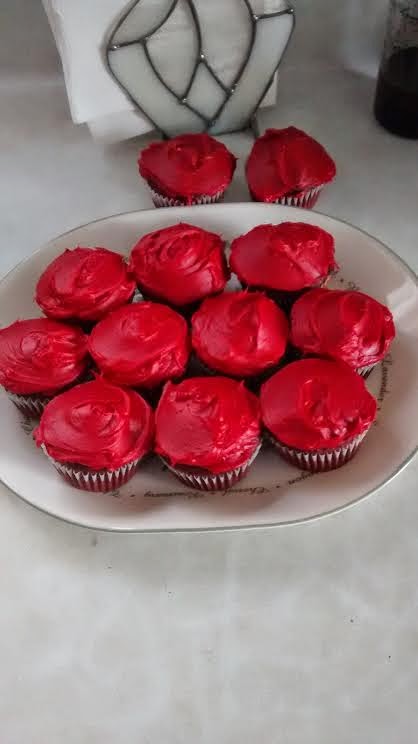 Because they're cheerful, and there was nothing else to do. :0

We persevere. I've already looked up the times on my parish's website for Mass on Ash Wednesday, because now I feel all deprived and teary about it. Let's talk more about Ash Wednesday tomorrow, shall we? But how was your last Sunday in Ordinary Time (until June), dear reader?
Posted by Tiffany at 10:58 AM