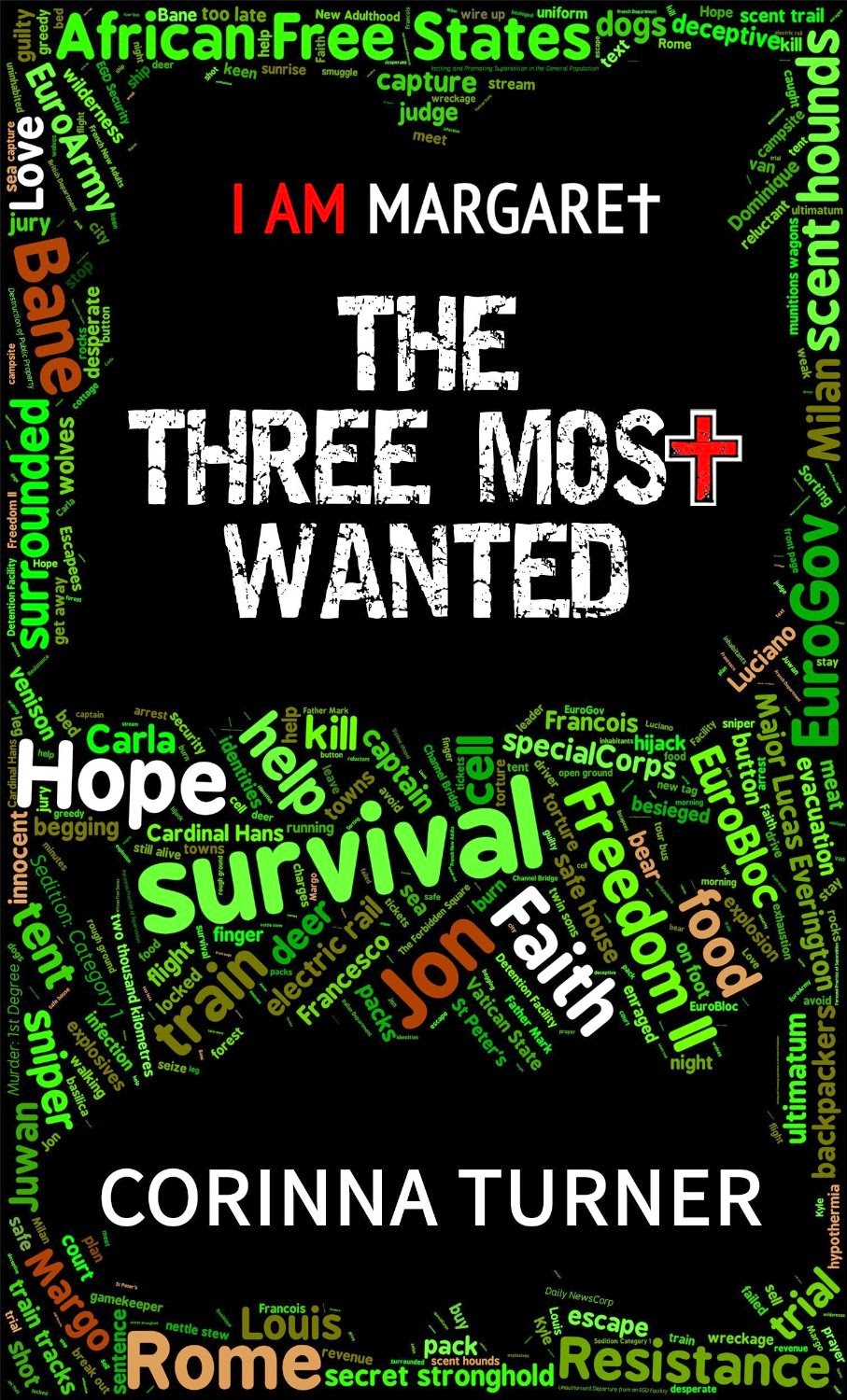 Happy Catholic Book Club Wednesday everyone! I am *very* excited about February's selection, which is book 2 in the I Am Margaret series by Corinna Turner, this installment titled The Three Most Wanted. If you haven't delved into this series yet (and this is for adults and young adults alike, I would say high school age and up) I would encourage you to read my review of book 1 to get a sense of the dystopian foundation for the series.

Did you go back and read it? :0 It's important, since otherwise the description of the second book will be confusing. But heck, never mind my review, read the book if you can! I cannot say *enough* about how much I am enjoying this series. Importantly, this review will contain spoilers of how the last book ended, so if you're committed to reading the series, go ahead and pause here.You can come back to read the review and leave your comments after you're done with book 1. :)

But here is the description from Amazon for The Three Most Wanted:

Margo, Bane and Jon are posing as just three more summer backpackers... but they have two thousand kilometres to go and the EuroGov’s hunt is closing in. They’re not the only ones in trouble. Major Everington is on trial for his life. And all those who help and betray them have problems of their own – the EuroGov has a lot to answer for. Even if they make it – just how safe is the long-besieged Free State?"

So we have our three endearing main characters from book 1, Margaret, Bane and Jon, and they are trying to walk to the Vatican, which is a Free State within this evil EuroGov empire. Annnnddddd, they have quite a lot of ground to cover. :) Margaret and Jon are Catholic, which is fiercely forbidden within this government-controlled territory. They forged a friendship while imprisoned together in the last book, after they failed their Sorting. Meaning that they are detained until the government decides to kill them for use of their body parts. Bane helped them escape, and he and Margaret are in love. Bane isn't a believer, but is sympathetic to the cause. These three, after freeing an entire facility of detainees, are very much wanted by the government. They desperately need to get to Rome before anybody recognizes them, so that they can seek asylum.

Along the way, as one would expect, they encounter a whole lot of challenges. Food is a huge issue, and Jon is injured. But Bane and Margaret will not leave him behind. It's all of them or none of them. They unwittingly run into different people who act as though they will help them, but...can they be trusted? The penalty for helping fugitives is high, but pretty much everyone in this universe has something to gain (or at least the hope of a gain) by trading information to the government in exchange for a detained loved one.

And this author expresses all of this SO WELL. I can literally *feel* the desperation in this book. Young people whose sweetheart was taken, or parents with children in a facility (or worse). It's heartbreaking, and people are in palpable emotional pain over it. And Margaret, Bane and Jon's feverish attempt to survive, their instinct to preserve their own life and the lives of those they love, is also palpable. I felt like I was right along with them as they traveled.

These books have a solid Catholic pro-life worldview that is espoused by our heroes and heroine, and the story as it unfolds will grip your imagination and make you appreciate your faith anew. I LOVE books like this, that are thrilling page turners, and that I identify with in terms of both the characters and the faith/morals presented. Once again, I found myself bringing my Kindle in with me to work so that I could read over lunchtime. That, in and of itself, is a testament to the power of a book.

As you would imagine, there are things that transpire in this book that are HARD. There was one particular scene that made me tear up over breakfast, and that was the first day of the lunchtime Kindle habit since I simply *had* to find out what happened next. I've spoken in other posts about having a difficult time reading about torturous, evil things, in one instance discontinuing my reading of the book. Although things that are unspeakably awful happen in these books, I did not have the same reaction to them at all.  The author handles it so adeptly, letting us see how our Catholic heroine applies her faith to deal with the events. The reactions of the characters are so genuine, so true to how the author has developed them, it all just *fit.* An evil empire is going to do evil things, but with our faith to sustain and guide us, we are strengthened and soothed. I was so inspired by the example of these characters.

So, if it wasn't already obvious, I HIGHLY recommend this book, as I did book 1 in the series. The instant my Kindle got to 100%, I was tweeting Corinna asking her about book 3 and I HAVE GOOD NEWS: it is coming out March 15th!

I can.not.wait. CANNOT WAIT! I am completely hooked on these books. They are all $3.88 for Kindle, and seriously: that is the bargain of the year!! We need to support creative and talented Catholic authors like Corinna. So if dystopian fiction is your thing, give these books a whirl. I really think you will love them.

Is anybody else reading this series? Do let me know your thoughts in the comments!
Posted by Tiffany at 2:41 PM