Adventures in intarsia knitting and Lent is coming! - The 4th Sunday in Ordinary Time...

Good morning all, and I hope that you are recovered from your Super Bowl festivities. ;-) We had a good time, inviting a few friends over. One of whom Anne has a crush on. :0 When your 3 year old is making valentines and wearing a dress in an attempt to capture the attention of a grown man, oh my. I'm not looking forward to her teenage years.

But yesterday was a fun day for other reasons too. The kids and I were at our usual 10 am Mass for the 4th Sunday in Ordinary Time, one of the final few Sundays prior to the beginning of Lent. I'm still at 6's and 7's about a Lenten plan for this year. I'm sure I'll come up with one, and I will post it here, but so far I'm not feeling ready. I still want to enjoy Ordinary Time for now.

Our parish still has our poinsettia display on the altar, albeit along with the green banners symbolizing Ordinary Time. But Candlemas isn't until today, so everything still fits. :)  I was hoping for the St. Blaise blessing of throats, because this seemed to be the closest Sunday to his feast day of February 3rd, but the bulletin announced that we would be doing that *next* Sunday, so the preference must be for the Sunday following the feast. Our parish also always offers blessed candles for sale following Candlemas, so those will be out next weekend too. A bonanza of fun rituals and sacramentals for the Catholic nerd.

Mass was lovely, the music was particularly good this week. Anne is LOVING Children's Liturgy of the Word, she's asking every day about it. Yesterday, however, she was tired, and that's never a perfect situation. When Father called the kids up to go back into the sacristy, Anne straightened herself up with excitement, but then paused:

She has this baby chick that I crocheted her for Easter last year, and suddenly he's her best pal.

"Oh. I think we left him in the bathroom, Honey."

Because, of course, our butts can't hit the pew upon arrival before she's asking to go to the bathroom. And duckie had made the trek with us.

One would have thought he was trapped in a burning building.

"Don't worry Honey, I'll get him and bring him back to you, ok?"

After she left the pew, I spotted the duck hiding underneath her coat. I grabbed him quickly, and made my way discreetly along the edges of the church, planning to bring him to her via a side door once she was back in the sacristy. But you know, Anne is 3. Discretion isn't in her vocabulary just yet.

Suddenly, from behind, I feel someone yank the duck out of my hand. It's Anne, and she looks furious.

The look she gave me conferred the fact that she thought I was duck-napping this thing and was the worst human being on the face of the planet. Before I can stop her, she then proceeds to RUN across the altar to catch up with the class.

Back at home, with Anne safely down for what I'd hoped would be a 3 hour nap :0 I was busy at work on this snowman stocking that I've been procrastinating over for months. This is actually a commissioned project, which I rarely do, but it's for a friend of a friend, and came with a heartbreaking story about a grandmother who knit all her grandchildren matching snowman stockings but whose arthritis no longer permits her to knit. So now, this friend has a new baby with no stocking. I mean...I couldn't turn that one down.

She said that she has other friends who knit, but they all said this pattern was too difficult to replicate, which should have been a clue, no, that maybe I was getting in over my head? The snowman is knit onto the fabric via a technique called Intarsia. This is when you are knitting a picture in the middle of a solid color. I have done Fair Isle knitting, which is when you are stranding the colors along as you knit. Intarsia is different. Because the colors are so localized inside the design, you need to have each color segment of yarn sectioned out and hanging there for every pass through the picture. Thus, even if you're using red in three different places within the picture, each of those instances requires a different segment of red yarn, you're not just carrying a strand of red along with you. What this means is that you have a gigantic mess on the wrong side of the fabric, with bobbins of yarn and yarn ends dangling about with abandon.

I finally told myself that Frosty had to get made, and since the weather was too snowy for a walk yesterday, I buckled down. Frosty looks pretty innocent, doesn't he? 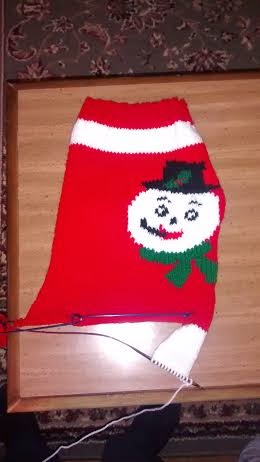 But this is what it required to make Frosty: 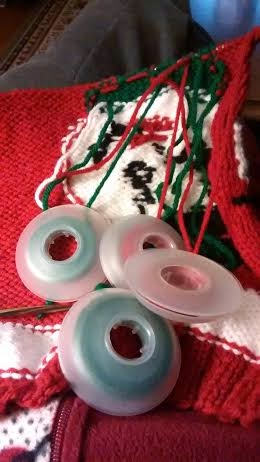 And this is AFTER I wove in about a hundred thousand ends because I just couldn't take it anymore. AND I'd cut off the black and white bobbins since I was done with them. I mean...I was beside myself on every row untangling active bobbins from other ends and strands coming from God knows where:

Yes, I was talking to myself.

Needless to say, I found Intarsia to be pretty stressful. #TypeA However, I'm really glad that I know how to do it now, and it is a cool looking result. Once I got through the color chart *angels sing!* I'm now grooving right along. The heel is done (it's white) and I'm finishing up the gusset. Just the foot and a white toe and we're done! Oh right, then I have to seam it.

But THEN I'll be done. And Frosty will go on to his new home.

How was your weekend, dear reader? Do leave me a comment. :)
Posted by Tiffany at 10:33 AM