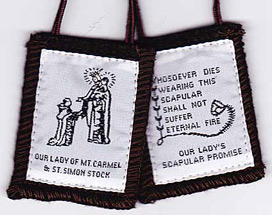 I wasn't planning to post today, but I was so inspired by our feast day today of Our Lady of Mt. Carmel that I worked quick and efficient like a bunny to finish up what was on my to-do list so that I could do some research into the Carmelite brown scapular. I learned so much about all different types of scapulars and was so engrossed that I couldn't resist a foray into our Catholic Nook to share the information with all of you. Settle in, let's learn about scapulars!

Scapulars are one of these Catholic-isms that non-Catholics kind of scratch their heads at and wonder where Catholics come up with such odd things. :) So here's the deal: scapulars are actually part of a religious habit. It began with the Benedictines, and it's a piece of cloth that drapes from shoulder to shoulder and down the front and back of a nun or monk's habit. It serves as an apron of sorts, but is now considered a vital part of the distinctive clothing worn by religious men and women.

Eventually, laypeople affiliated with the different monastic traditions wanted their own scapular, and devised smaller versions, like the one pictured above. These small scapulars will match the color of the religious habit for that order, and will consist of two images attached by two strings. You wear one image tucked under the front of your clothes and one under the back. The images, of course, have meaning for that order. I have a plain white one that I received from the Dominicans, although it does not bear any images.

This devotion generally requires that you become "invested," meaning that a special priestly blessing is given to the scapular and to you. Some of the scapulars I will mention below have special rules for investiture, so if you're interested in any of them, be sure to research what is required for that particular scapular.

Scapulars are what Catholics call a "sacramental." We do not believe that the object itself has power, but that it is a holy reminder of something in our faith and has a blessing associated with it that can confer grace. Most of them are based upon a private revelation, and so some may not find them compelling. One of the things that I love about our faith is that there is something for everybody. :) I can't say I have had any mystical visions lately, but I have no problem with other people having them. Let's dive in!

Here are six of the most popular scapulars, plus one that is extra fascinating:

(1) The brown scapular of Our Lady of Mt. Carmel - This is the Carmelite scapular and certainly the most popular one in the Church. People with no affiliation to the Carmelite order are also very devoted to this scapular. Tradition has it that on July 16, 1251, the Blessed Mother appeared to St. Simon Stock, gave him this scapular, and promised that those who wore it would confer special grace at their hour of death. You can see this revelation taking place in the image on the first side of the scapular.

(2) The red scapular of Christ's Passion - This scapular is attributed to a vision received by an unnamed Daughter of Charity of St. Vincent de Paul. Jesus told her that the faithful who wear this scapular every Friday would have an increase in their virtues of faith, hope and charity. One side of the scapular depicts Jesus on the Cross with the inscription "Holy Passion of Our Lord Jesus Christ, save us." The other side bears the image of the Hearts of Jesus and Mary with the words "Sacred Hearts of Jesus and Mary, protect us." The images are on red wool and connected by a red woolen cord.

(5) The white scapular of the Holy Trinity - Pope Innocent III, who approved the Trinitarian order in 1198, saw a vision of an angel wearing a white garment with an image of a cross formed of a blue horizontal bar and a red vertical bar. This became the habit of the Trinitarians, and the model for the small scapular worn by laypeople who became members of the Confraternity of the Most Blessed Trinity.

(7) The five-fold scapular - I had never heard of this before and was quite entranced. This is a compilation scapular of the brown, black, blue, red and white scapulars. I mean, did you ever? It looks a bit like a book, with all of the images piled one on top of the other, and you flip through them. The red scapular must appear first and all five will be connected by a red wool cord. You can see one here. It looks a tad bulky, but cool, no?

So there you have our primer on scapulars. There is a LOT more information out there, but this should get you started if you fancy wearing a scapular. For the brown scapular, you'll even seen teeny tiny versions so that it's not so difficult to wear unnoticed under your clothes, even small plastic ovals that look more like a traditional necklace, or scapular medals. The Catholic Company has a beautiful selection of scapulars, go check them out. I really fancy that blue one!

*Photo is from www.freebrownscapular.com
*A lot of the information for this post came from CatholicCulture.org