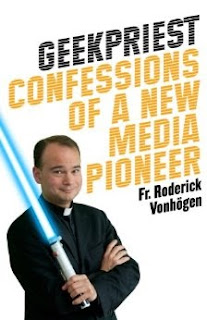 Recently, I received and read a pre-publication copy of Geekpriest: Confessions of a New Media Pioneer, by Fr. Roderick Vonhogen to review for a Catholic library journal. Although I cannot fully review the book here, I wanted to convey my informal impressions for those that may be interested in pre-ordering this via Amazon.

I am a huge fan of Fr. Roderick's via his podcast on SQPN. I've listened to his show, "The Break" for several years, and have also started subscribing to a slew of other SQPN podcasts. Love them. And Fr. Roderick is just a gem among them. :)

You all know that I love spiritual memoirs and personal stories. In his podcast, as well as in this book, you get such a sense of being there right alongside Fr. Roderick as he tells you about what is going on in his life. A very personal, friendly feel to his work. EXTREMELY charming. If any of you do listen to his podcast, you will LOVE his book.

In it, he discusses a number of important events in his life: how he discovered that he had a vocation to the priesthood; the stress of being a new priest when he felt he couldn't say "no" to anything that anybody asked of him; how he discovered social networking and new media and found that he could incorporate his personal interest in films and television into ways of meeting people and sharing his faith; and his venture to Rome for the death of Blessed Pope John Paul II, and later the election of Pope Francis. You will learn some very interesting (and sweet and funny!) things about Fr. Roderick, but he also shares some words of wisdom about successful blogging, podcasting and reaching out to those who may not ordinarily listen to or read Catholic content.

Anybody who listens to "The Break" knows how much Fr. Roderick loves the Star Wars franchise, super hero movies, and Disney films. All of those things are discussed in his book in the context of how he used new media to find other fans and then create content devoted to their shared passion. Where applicable, he weaves in discussions of relevant Christian themes and their relation to his faith.

I think that I can sum things up by saying that Fr. Roderick is absolutely precious, and you should definitely read his book. :) If you enjoy memoirs, and are also interested in ways to increase your presence in social media, this book is a perfect fit. I read this in well under a week because I became so engaged in the stories. And I have two children who are master interrupters, so this is no easy feat.

Geekpriest is available for pre-order at Amazon (it will be released in September), and will also be available for Kindle.
Posted by Tiffany at 3:47 PM