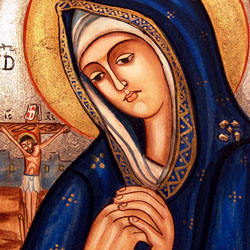 I have so much to say today, so it's going to be one of those "settle in with a cup of tea" posts. I'm making my Marian consecration today based upon the formula in 33 Days to Morning Glory by Fr. Michael Gaitley, and it seems fortuitous timing. I need the spiritual boost this morning, to be sure. I had considered running to my parish for the 8 am Mass, and I really wish I had. Sigh.

Let me begin by writing about my weekend (somewhat more lighthearted) and then making my way to this morning. We could all use the levity, I'm certain.

We got some snow on Friday (just under a foot) but didn't have it nearly as bad at the further East Coast. My sister in Maine is still digging out. My dance class was cancelled and we spent the evening watching more of Downton Abbey. Which, I have to say, has been difficult to avoid spoilers for. This gap in the airing between the UK and the US is quite dangerous. *unhappy face*

Anyway, I digress. Saturday morning and afternoon were "just ok." The kids were all worked up and I was feeling oversensitive. Happens sometimes. Henry was slated to spend the night at his grandparents, so we had just Anne for the evening. It feels strange only wrangling one kid. The day looked up as we took her to the mall and did some shopping at Yankee Candle. We're big scented candle fans in my house.We had a coupon, so we stocked up for the remainder of the winter and spring.

We got home, watched another Downton and headed to bed. Anne had been snugly tucked into her crib for hours.

We get in bed and begin to chat. The sound of a barking dog permeates our bedroom. There are several dogs on our street, but it is rare to hear one barking like this, especially on such a cold night. Mike looks alarmed.

"Why is he barking non-stop like that? Dogs shouldn't be out tonight, it's only 10 degrees."

"Yes, that's true, it's so rare to hear a barking dog outside on this street. Are you worried?"

We chat for a while longer, also discussing dinner for Sunday, which involved Mike travelling downstairs to take ground beef out of the freezer to thaw for meatloaf.

"It's been a half hour and that dog is still barking. I think it might be Oliver from next door. I'm going to go check it out."

Isn't he heroic? He gets dressed and hustles downstairs. I promptly fall asleep.

I am awakened by the unmistakable feeling of someone staring at me. I pop my eyes open. It's Mike.

"It's Oliver. He's in the backyard barking at the back door. I don't think Chris and Dina are home."

"Did you knock on their door?"

"No, that would have been weird."

"I don't think so. I mean, what can we do? We can't just go and take their dog if we aren't sure that they're not home."

"All right. Let's both go back. We can't leave him out there."

I grab my robe to throw on over my nightgown which consists of red flannel with Scottie dogs decorating it. We hurry downstairs and bundle up.

We both head right to the backyard. Oliver is where Mike left him, barking frantically to be let in. He has a clear conversation bubble over his head that says:

Fantastic. He's usually a nice dog, he was just obviously in Protecting Backyard Mode, followed by being freezing and terrified. It had now been 45 minutes since we first heard him barking, and we likely just hadn't heard him previously because we had been watching t.v.

"Um. We're going to have some explaining to do. They just pulled up."

Ha! Our poor neighbors pull into their own driveway and here come Mike and I, in our pajamas, tromping out of their backyard.

"Oliver! How did he get out?! Oh my goodness, thank you! He must have snuck out when he left, we've been gone for hours!"

So, all is well that ends well. Oliver is fine. Our suspicions were correct in that he wasn't supposed to be out and needed rescuing. The fact that we failed in aforementioned rescuing didn't seem to be important. We tried.

So that was the big excitement Saturday night. Sunday was extremely pleasant. Mass (in which Anne was an excellent girl), plans for Ash Wednesday (going for ashes with Anne at 4 pm, Henry will get ashes at school), some shopping, a nice meatloaf, more Downton Abbey, knitting. A good day was had by all.

This morning I had the regular Monday thing going on. It's extremely busy right now at work with teaching, and I was anxious to get in and prepare for a 9:30 am meeting. I also wanted to spend some time with my Marian consecration prayer and finalize my plans for Lent.

I'm driving in, listening a Catholic Weekend podcast from 2 weeks ago about the March for Life because I'm perpetually behind with podcasts. I stop at a red light. My cell phone vibrates.

Normally, I would ignore it, since I was driving, but as I was stopped at what I knew would be a lengthy light I pull it out of my purse to see if it's a new text from my sister. It's a phone call and it's from Mike. I immediately worry, since he would have known that I hadn't reached work yet and would only be calling about something important. I pick up.

"Hi Sweetie. I just saw on the news that the pope is resigning."

I was stunned. I mean, I shouldn't be. He's older than John Paul II was and we've known that his health has been declining in recent years. But I was still shocked. This is still a huge development in Catholic news and fairly uncommon.

I don't really know how I feel about it yet. I respect his decision, but I'm so sad to see him go. John Paul II was the only pope that I remembered for the first 30 years of my life, and now I will see 2 conclaves in 8 years. I have always liked Benedict XVI. I respect and admire him. Nobody can replace John Paul II in my heart, but I do love Benedict.

I'm anxious about who will be elected. I think things will be fine, but I can't help but be anxious. The unknown is always like that. It's going to be a powerful Lent, I think. It's just so soon! I'm not ready. But I suppose we never are.