Ah, Ash Wednesday. I look forward to this every year. I enjoy having a season set apart for contemplation and sacrifice. I love the symbolism of the ashes. Mid-February is the perfect time for Ash Wednesday, in my opinion. The gray skies and chilly weather just fit. We all look forward to the spring dawn of Easter.

And my vigil of Ash Wednesday was just superb. I was on the reference desk yesterday until 3 pm, but as soon as I finished I wrapped up things in my office and took 2 hours of vacation time to leave early. First, I stopped off at our local Christian bookstore, which is conveniently quite near campus. I was in search of the St. Joseph Guide to the Liturgy of the Hours for 2013. We do have a small Catholic store near my house, but it's so tiny and the stock so limited that I rarely go there. We also have a large Catholic store associated with a local shrine, but it's a solid 35 minute ride away. I'd like to get there during Lent, but that didn't help me yesterday. This Christian store is a nice size and very Catholic friendly. They always have a nice stock of Catholic books, including the St. Joseph guides. I happily stopped in.

I make a beeline for the Catholic section but alas, the 4-volume guides were all gone. They had the guide for single volume Christian Prayer, as well as a guide to this year's missal, but not the one I was seeking. While I was there, I checked out their "parish supply" section which always has an interesting assortment of items. Roman collars, Vacation Bible School kits, baptismal candles, saint medals, all represented. I immediately found what I was hoping for - one of those tall pillar candles encased in colored plastic that you see in racks at churches for you to light for a specific intention. They usually have crosses molded into the plastic and come in a few colors. Henry *loves* these candles and wants to light one every single week at Mass. It's the highlight of Mass for him, frankly. For $3, I got him his very own blue candle. For Lent, I planned to start a nightly praying of a rosary decade with him. and we can light the candle while we do that. We've done that in the past, and he loved it. Whatever helps them to pray the rosary I see as a good thing.

Before I left, I perused the children's books and spotted a toddler version of Henry's absolute favorite kids Bible, The Beginner'sBible. This one was a board book with a condensed number of the Bible stories, but nice and sturdy. I chose that as Anne's Lenten gift. After I checked out, I stopped to peruse their selection of Fontanini nativity pieces. I love being in stores like that; they're so peaceful.

Feeling perky, I then stopped off for confession. The parish connected with Henry's school has confession at 4 pm on Tuesdays, which just sounds like an odd slot, no? But I have found it strangely convenient. I haven't been to confession in a shameful number of months and have been meaning to stop in since the beginning of Advent. Sigh. The last time I tried to go, there were so many people waiting I ran out of time and had to head home. As I got out of my car and headed over to the church, I bumped into the priest who was parking his car in the rectory spot. That seemed a bit awkward, but I persevered.

The church was serene and housed 2 other people waiting for confession. As I dipped my fingers into the holy water font I spotted a special Lenten issue of The Word Among Us available as a freebie over near the bulletins. I snagged one and slipped into a pew to await the priest. I was feeling some anxiety about not doing a proper examination of conscience and voila! An article in The Word Among Us about a Lenten examination of conscience. Xanadu. Scanning through the list I unfortunately noted 3 additional things to add to my list.  Actually, make that 4. Ugh.

The priest came in and entered the confessional and I let the other two people who were there before me line up and go in. The sanctuary was very peaceful and I wasn't in a rush yesterday. Mike was teaching and the kids were safely tucked away with their grandparents.

Once they were done, I went in since no one else was waiting. As ever, I had an excellent experience. Whenever I go to confession, I put it off way too long, but the instant I go I wonder why I don't go all the time. I feel GREAT when I get out. It's almost as if you can physically feel the grace moving within you. I prayed for a few minutes and got up to leave, glowing. Just as I was putting my hat and scarf back on, a mother came in with her 2 young children. She was coaxing the little girl over to the confessional when I left, making me smile.

Speaking of confession, Henry will go for the first time on March 6th and he has his Act of Contrition all memorized in anticipation. He's nervous, but I'm so excited for him. We used to make our First Communion also in second grade, closely following First Reconcilliation, but that doesn't seem to be the norm anymore. He won't make First Communion until next May. Anyway, in anticipation of his first confession, and for our new prayer routine for Lent, I presented Henry last night with his candle (*gasp* "Oh MOMMY! It's BEAUTIFUL!" I seriously could have gotten away with only giving him the $3 candle) and his first big boy rosary from unbreakablerosaries on Etsy: 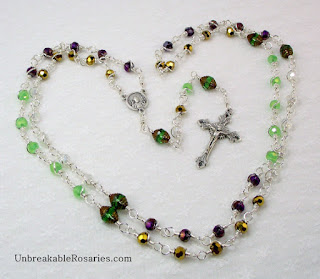 It's a beauty, no? And poignantly, the center medal features John Paul II and Benedict XVI. He couldn't wait to head up to his bedroom and christian the new rosary with the holy water we retrieved from our parish and light the candle for the first time. We prayed the First Sorrowful Mystery, and he did a great job leading the prayers. I'm looking forward to continuing our tradition for all of Lent. It's nice because now his bedtime is later than Anne's, as I usually put Anne down. So this way, I can spend individual time with each of them before they go to sleep.

We've been having some long nights with Anne, so Ash Wednesday morning dawned for me at 4 am. But I felt good. I already said my first installment of morning prayer and this is another thing that I can't believe I don't do all the time. The Liturgy of the Hours is just wonderful. The prayers are beautiful and I love the connection that I feel with the universal Church when I pray it. I see that Amazon has the St. Joseph guide for 2013 and I'm about to order a few books for Mike, so I may stick that in to make my navigation of the volume a bit easier. Right now I'm making do with the 2012 guide.