Ok, housekeeping first. The ghost socks are coming along. I'm on the heel flap of sock #1. I tried a smaller needle size and once again, it looked like a ghost massacre had just taken place. I'm stuck with the 3.25 mm needles for better or for worse. I'm hoping that the sock won't be too big for my foot but I feel peace in the sense that no other needle option will work so whatever happens, happens.

So that's all good news. We had a very nice weekend with the kids. The fall is really at its peak here and it's just beautiful. We raked up leaves in our back yard which Anne is a huge fan of. She has her own tiny rake that Hank used when he was little, and she toddles around the yard carrying it around. It's all very adorable. Here she is, ready to do some other gardening: 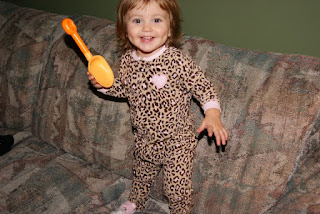 Isn't that sleeper just a crack up? It has pink cat faces on the feet. It just kills me.

In Catholic news, yesterday Kateri Tekakwitha was canonized. This is something I've been waiting for for quite a long time and I was hoping to catch some of the Mass on EWTN but didn't check soon enough. At any rate, that afternoon I logged into Facebook, and once again, I was annoyed. :) One of my friends posted a link to an article about the canonization, and this started off a small flurry of comments. One mutual friend commented that she sees the canonization as a positive thing, but that given some of the unsavory missionary work in those days there is also a negative connotation. Her comment was respectful, so it didn't bother me in the least. And I have read an article about this more negative view of St. Kateri's rise to the top and I guess it's just one of those situations wherein I simply agree to disagree with those that hold that opinion. Do I think that all Catholic missionary work was totally on the up-and-up with no coercion? Of course not. But someone of Kateri's conviction was NOT acting due to manipulation; her faith was deeply held. And this is about her, not about inappropriate missionary activities.

Well, after that, someone that I don't know chimed in with an unpleasant tone and with scathing remarks. That she's no longer a Catholic because of how awful the Church is and how can anyone POSSIBLY think this canonization is a good thing given the circumstances, and the Church is STILL awful, and on and on. I think her bottom line can be summed up as the Catholic Church = No Redeeming Characteristics argument that we often see toted out on any number of issues.

It just brought me down a little bit. I hate to see the Church so maligned like that. But any religious faith with tenets that are challenging for most people is going to take a hit in the court of popular opinion, no way around it. And someone speaking with obvious hatred about the Church is not getting so worked up about a single issue; there is almost certainly many reasons that they are holding the Church is such ill regard. And Facebook is not the venue to get into any of that. It's hard to see such things out there without responding, but no response is going to have a positive effect, so one has to let it go. Which I did. But I felt porky about it.

Has anybody else seen this type of reaction to St. Kateri's canonization?