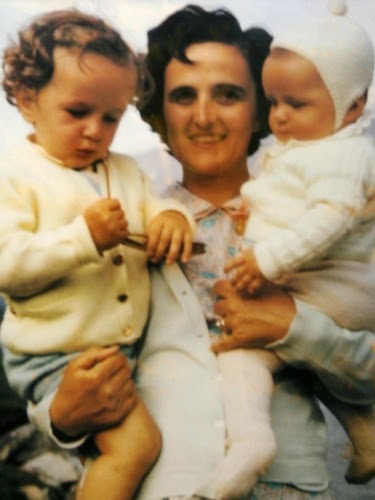 Happy Thursday all! Today is another installment in The Church Triumphant saint series, and just a few days ago, April 28th, we celebrated the memorial of a favorite of mine, St. Gianna Beretta Molla! Let's talk about her a little bit, shall we? And then I'll tell you why she's so special to me.

St. Gianna is a contemporary saint, she lived from 1922 to 1962. My parents were alive for the last ten-ish years of her life. She was born into a large and devout Italian family, the tenth of thirteen children. Several of her siblings joined the religious life, and Gianna considered that as well, but ultimately decided to pursue medicine as a career, and later married Pietro Molla. She specialized in pediatrics, and was involved in faith-based social groups such as Catholic Action. Her faith was an important part of her life that she brought into her work as a physician, and then as a mother. She and Pietro had three children, when in 1961, she conceived their fourth child. Early on in her pregnancy, she was advised by her doctor that she had a fibrous cyst on her uterus. Eschewing the advice to have an abortion (which would make removal of the cyst less risky) or a hysterectomy, Gianna chose to have the cyst removed and to carry her daughter to term. Following the delivery via cesarean section, Gianna soon developed septic peritonitis and died. This daughter, Gianna Emanuela, also went on to become a physician, inspired by her mother's example. In May 2004, when Gianna was canonized by Pope John Paul II, her husband and two of her daughters were at the ceremony, marking the first time that a husband was present for the canonization of his wife. There is a book memorializing letters between husband and wife, called The Journey of Our Love: The Letters of Saint Gianna Beretta and Pietro Molla. How sweet is that?! (and only $6.99 for Kindle!)

St. Gianna's story touched me as a young woman for several reasons (in fact, my Dominican religious name is Maria Gianna!) She was a lay woman, and let's face it, the majority of saints were religious. I can relate to her very much as a lay Catholic woman working outside of the home, and as a wife and mother. And even before I myself was married and had children, I was so inspired by her example of putting the life of her unborn child ahead of her own. Originally I was under the impression that the mass on her uterus was cancerous, but it was not. However, her being pregnant certainly complicated the situation with removing it, particularly given the medical technology of that time. For her, there was only one option, and that was to ensure that her baby survived. All of her actions were ordered toward this goal. I really admire St. Gianna, and with her countenance so relatable to me, I feel like she's a friend of mine, interceding for me and rooting for me up in heaven. *heart*

Does anyone else have a devotion to St. Gianna Beretta Molla? Do let me know in the comments!
Posted by Tiffany at 9:39 AM