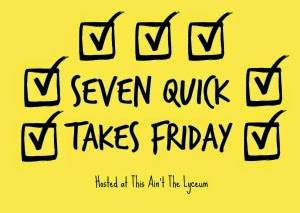 Happy Friday all! No Catholic content today, this will be a dance focused post, so for those who are interested in such frivolity, welcome! :) My troupe had a performance last night at a college cultural night, and as ever, it was amusing. This is my 5th year dancing with the troupe, so I've been to lots of these, by which I mean public performances. They are very different from dancing at a hafla, which is essentially a studio-wide recital, wherein your audience is the family and friends of the dancers. In a public performance, your audience is the people attending the event you're dancing at, and they may or may not be (a) into dancing, and/or (b) nice. :0 Like I mentioned, I've been to lots of these, and experienced the full gamut of possibilities from: Awesome! to Will This Music Never Be Over?! One of our troupe members, however, is new to our group, and while she danced with us at the last hafla, this was her first, what I term "crazy, public performance." She was pretty wide eyed about the whole thing, as was I the first time I danced at one of these, and understandably so. Because you never know what you're gonna get! And so what were the 7 elements to this particular performance, which do seem so common at many others? Settle in. :)

We weren't dancing outside (this time), but there was a decent amount of walking outside to get from the parking lot to our destination, and it was raining. Rain = soggy dance coverups, which really isn't a good look, and it also means that Tiffany's hair goes into gigantic expansion mode. Also not a good look. But persevere we must.

-2- "Why are there women wearing voluminous hot pink mumus on the stairway landing?! Never mind, we don't really need to go upstairs after all."

Given how many different choreographies we now perform on a rotating basis, and how many formation changes we inevitably need to make for each event to accommodate for absent members, it's a little nerve wracking right before we perform. Do I remember everything? Do I remember the *new* everything, now that I'm in totally different spots than usual?! So we usually try to find a discreet spot to run through problem areas right before we dance. Last night, we found a back staircase with a decent sized landing, so we clomped down there in our giant pink coverups to practice. Apparently though, this back stairway wasn't all that secret, because several groups of people saw us and immediately hurried off. Even after we were finished and were just congregated on there chatting, people would approach the stairs, see us, and quickly back away. I guess we're kind of scary. ;-)

I don't know why, but there isn't much middle ground with audiences at these events. People are either completely silent, such that you fear they are actively hating you and plotting their escape from this torture of watching you dance (they're likely just very polite and feel it's improper to move or make noise during a performance, but there you have it), OR they are completely off-the-wall loud and boisterous. For whatever reason, there usually aren't further alternatives. In the case of last night, we had...

Don't get me wrong, I'm appreciative. It's just that when college students are that enthusiastic about a dance performance, I suspect that they were three sheets to the wind before even arriving. I will say that they were *super polite* after we danced, coming over to us to tell us how great they thought the numbers were and how much they enjoyed it. And they didn't appear drunk or disorderly. So maybe they really did love us because we're just that good. ;-) But YEAH, they were into it. People were dancing in their seats and clapping in time to the music. Our kicky drum piece even ramped that enthusiasm up to the next decibel. So you could say it went very well.

-5- "Does anybody want to participate in a short demo class, to learn some movements of Middle Eastern dance?" *suddenly everybody is super shy*

In between our sets, Claire taught a demo class. Inevitably, there is always resistance to this, even amongst enthusiastic audiences. Getting up and dancing in front of people isn't so easy, yes indeed, I am well aware. :) So even our loud college fans had to be coaxed a bit to get some volunteers. Claire is very good at this though, and within minutes she had a crowd up there with her. So that went well too. But then...

-6- "I'm going to let the music keep running. Improvise, and try to get people up to dance with you!"

Let's all groan together, shall we? Improvising is no problem for me, but I don't want to have to actually (a) talk to anybody, or (b) interact with them in any meaningful way. #introvert! But we are often tasked with doing this at these public events. And the thing is, people are either jumping out of their chair wanting to dance, which is easy, or glued to their seat in terror that you are going to ask them to dance. Me? I don't want to do anything above smiling at you winningly and dancing in your general vicinity. Unless someone comes over to me, I *really don't want to go over to you.* It's just my lot in life as a shy person. I have no problem making stuff up as I go along and dancing around a full perimeter of the room, that's what makes Middle Eastern dance so fun, in my opinion. But this interaction thing gives me hives every single time.

And so for our second set, we danced our new Shaabi piece, and then the dreaded moment came: we struck our final post, and the music kept playing, so we all reluctantly improvised our way out to the crowd. The room had thinned a bit during the demo lesson, so our most enthusiastic supporters weren't there. This was a definite problem. As I improvised my way around the room, I could see some of my troupemates bravely trying to convince people to get up and dance, and getting petrified-looking rejections for their efforts. For my part, I just kept dancing and prayed for the music to end. It didn't.

But I made it. Eventually, a few people got up and we made the most of that. Then we were done. Glory be.

It was chilly in the room we were dancing in, but as soon as we were done, I realized how warm and sorta gross I was. :0

We worked hard, but it went smashingly well, so who can complain? Back out to the rain we went, pink coverups blowing in the breeze. All glamor, all the time. ;-)

More dance fun to come in just over 2 weeks at our spring hafla! Then festival season sets in, and the real adventure begins. Stay tuned!

If you're still reading, thanks for hanging with me in this dance-themed 7 Quick Takes! It's a passion of mine, and I hope that you enjoy reading about it as much as I enjoy writing about it. I'll talk to you all on Monday, but in the meantime, check out more 7 Quick Takes over at This Ain't the Lyceum!
Posted by Tiffany at 12:00 PM