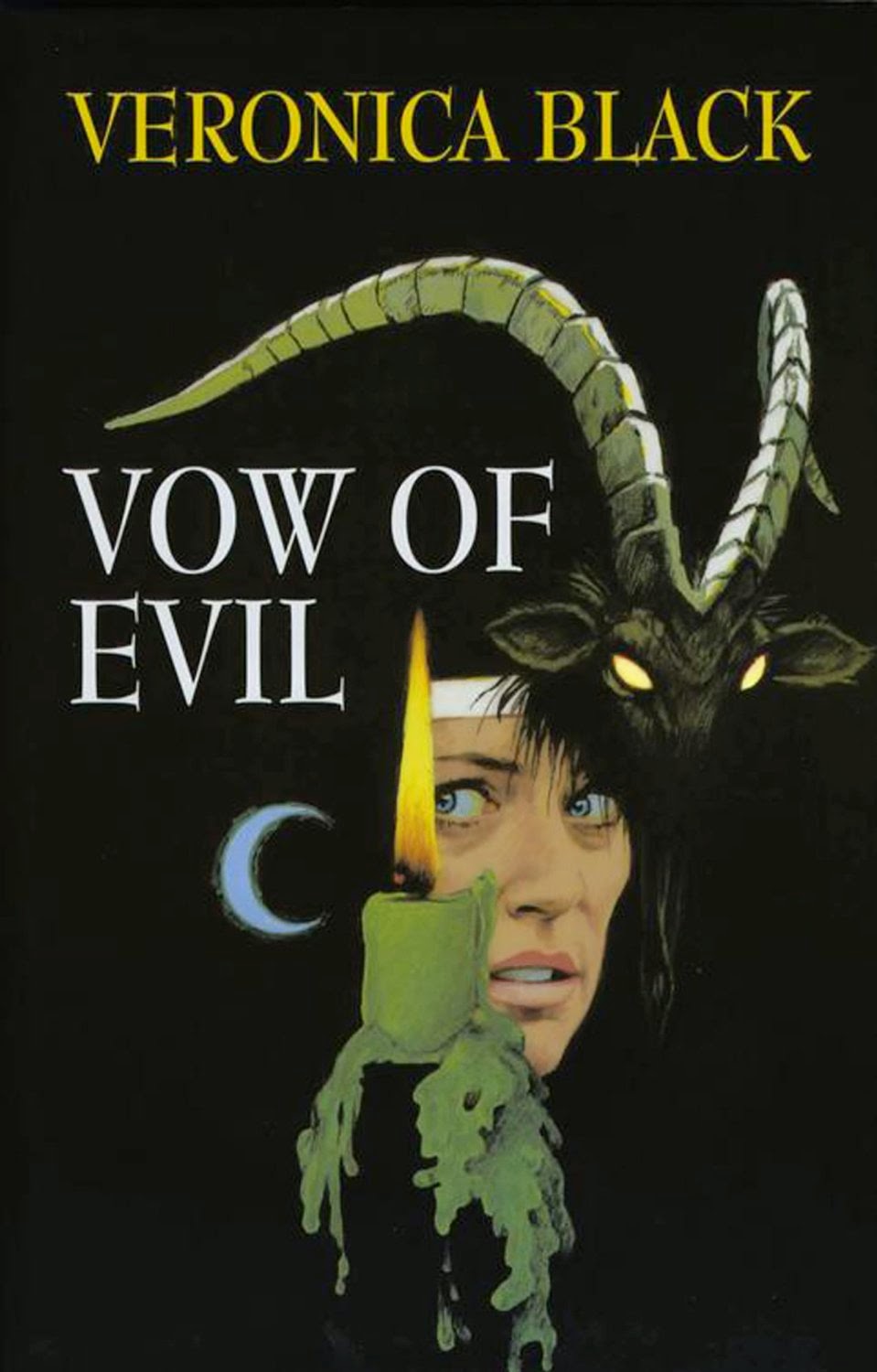 Happy Catholic Book Club Wednesday everyone! This month I read Vow of Evil by Veronica Black, which is appropriate given the day I had yesterday. And relatedly, the reason why I didn't get to blog yesterday. Read: Evil Reference Shift From Hell After Which I Wanted To Go Home And Cry. Let's just say it involved:

(a) A mean lady,
(b) Some guy talking to himself (who apparently had been disruptive earlier and was threatened with expulsion),
(c) A loud and tension-filled conversation in the middle of the library between another guy and his bank, and
(d) an Arabic/English source reference question that took me an hour to answer.  Good times!

It's one of the dangers of being a librarian. :-\ Evil afoot in the library...*doomy music plays* Instead, I just went home and drank a lot of wine. And I ate tacos. Win!

But at any rate, back to Sister Joan. This is a fantastic series by British author Veronica Black (pseudonym for Maureen Peters), who unfortunately passed away in 2008. Thus, the series comes to a conclusion with Vow of Evil. I read all of the other Sister Joan books one summer a number of years ago, procuring print copies from Amazon long before I had my Kindle. I was addicted, quickly moving from one story to the next. Sister Joan, when the series begins, is 35 years old, a "late vocation" to a fictional, semi-enclosed order called the Daughters of Compassion. She's a feisty little number, and as these things go, gets caught up in a number of local murder cases and helps the police out with solving them. Her personality and interactions with the other sisters is lively, humorous and refreshing, and I found the books a delight to read. Vow of Evil was written in 2004, and back when I was reading the series, this title was not available in print from the American Amazon store. I remember feeling chagrined that I couldn't get my hot little hands on it.

Now, all these years later, I happened upon in on Amazon available for Kindle. Shazam! Downloaded. And this book takes place about 7 years after the last installment in the series ended, so all of the sisters have aged slightly, and Sister Joan has kept out of happening upon dead bodies for a spell. ;-) The short description from Amazon:


It's been some time since Sister Joan of the Order of Daughters of Compassion has had to solve a murder, but there are indications that will soon change. Outbreaks of vandalism in the village coincide with the sighting of a devil in the churchyard and strange candles left burning in the postulancy, now rented out to the Lurgan family.

The Order of the Daughters of Compassion hasn't had any Postulants for a few years, and no new ones are incoming for the next year. The sisters sadly decide to rent out their separate Postulancy building to raise a little money. Meanwhile, Sister Joan notices some strange happenings while she cleans out the structure. She comes across offensive graffiti and defaced library books and wonders who has been sneaking into the old Postulancy? As well, her dog goes missing and is found some distance away, purposely tied up and left there. Once the new tenants arrive, things take an even stranger turn, and the members of the tenant family don't exactly endear themselves to Sister Joan. Meanwhile, elsewhere in the village, an older woman is saying that she has glimpsed a demonic-looking creature in the cemetery. When someone turns up dead, Sister Joan immediately suspects foul play, and that all of the strange occurrences of late are related.

So, my review. Overall, I enjoyed this book. I loved the series as a whole, and I highly recommend it for wholesome, Catholic mysteries. This book did have a few instances of foul language, an FYI if that bothers you. I will grant that it's been about 10 years since I read the other books, but it seems to me that this particular book was a bit different from the others. It felt a little darker, and like our Sister Joan had grown a bit cranky in her 40's. It also got a little slow for me towards the middle. That didn't mar my enjoyment of the book, but I did notice it.

I'm really glad that I got to read this book, since this is the last we'll see of dear Sister Joan. I plan to go back and re-read the other books, since I have lovingly held on to my print copies. Many of them are available for Kindle now, though not all. The ones that aren't are available for Kindle are available via the Amazon Marketplace in print for a penny plus $3.99 shipping. WELL worth it, that's how I acquired my own collection. This site has a very nice rundown of the series, with an overview of the background plus a description of each book, if you'd like to gauge your own interest in the other titles.

Have you read any of the books in the Sister Joan series? Do comment! Tomorrow, I have a saint post planned, oohhhhh! So do come back to join me. :)
Posted by Tiffany at 10:30 AM