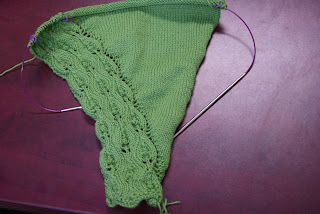 That's the start of my Lady Edith Shawl, very much still on the needles. I work on it diligently each night as we re-watch Seasons 1 and 2 of what may be our favorite show of all time, Downton Abbey. It's taking quite a while, but I don't mind. Come spring, I'll have a lovely new shawl.

I'm also still doing the mystery knit-along, and after this week I think we'll have the first glove done. I can post a picture after that. :) Mike is all confused:

"If it's a mystery, how come you know what you're knitting?"

Which is indeed a very good question, no?

I too was a hair disappointed to know what we were knitting from the very first clue, but the designer needed to give a lot of sizing information up front so that everyone would be happy with the way their finished item fit. And man oh man, I can see why.

Ravelry has been abuzz about this knit-along, with lots of demanding knitters wanting additional clues and help along the way. From requests for how to knit both gloves at the same time, to critiques about how the lace pattern is working up on the suggested variegated yarn, the designer has been shepherding quite an opinionated group. Before we knew that our mystery item was gauntlets, I was amused by a few people who posted that they would NOT be participating if the mystery item was _____ (fill in the blank). A purse, a hat, you name it. If there was even a possibility that it was one of those things, they weren't knitting it. They were taking their needles and playing elsewhere.

I mean, really. This is a *knit-along*. Let's not take ourselves too seriously. As well, it IS supposed to be a mystery, that's part of the fun. If you're not willing to live dangerously, then this is not the project for you.

At any rate, the end design is the only mystery that remains at this point, but I'm enjoying it very much all the same. And the show.

I love this show. And their hats!!! My God, the hats. I wish women still wore hats like that. The music, the clothing, the plots, everything is just so SWEEPING on that show. I'm so, so enjoying it.

We have not started watching Season 3 (so no spoilers!). We pre-ordered the DVD's from Amazon and they ship out on Tuesday. Then we'll savor each episode at our very own pace. Plus, we're usually asleep between 9 and 10 pm on Sundays nights, which is when the show actually airs. The children have drained the life out of us by that point.

We're nearly done with Season 2. I have belly dance tonight, so no Downton. We plan to watch the final episode, the Christmas special, tomorrow night.