A pleasant weekend, as Ordinary Time settles in 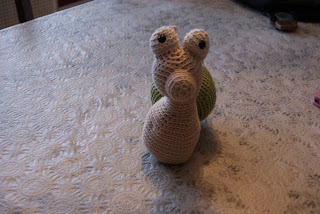 Isn't he precious? I made him over the long weekend for Hank. He's a snail, and his name is Milton. If you can think of anything cuter than a snail named Milton let me know, because I don't think it exists. 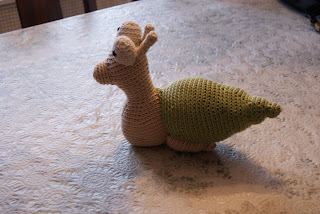 "Mommy, can I sleep with my new snail?"

"NO!! He's needed for photography, and for knitting group show-and-tell on Tuesday. I don't want him to get all squished up before then."

Because stuffed snails have such pressing media obligations...

Anyway, we had a glorious weekend. I brought both kids to Mass with me on Sunday and despite Anne being at a *really* tough age for such activities, I've been able to manage it (not always well, mind you, but I do what I can). Our garbage disposal gave out over the weekend and I wanted to leave Mike the time (and ability to hear the thoughts running through his own head, you parents know what I'm talking about :)) to work on that while all 3 of us were at Mass. I was chancing it a bit with Anne's nap, but I packed up a sippy cup, some crackers, her St. Joseph board books, and my resolve. I also put on a headcovering, which I haven't worn in a while to Mass due to sheer laziness, since wearing one always provides that physical reminder that I should strive to be prayerful. And not in a panic-stricken frenzy. We set off.

It went really well. I've already thinking about Lent, as I always do at this time of year. I love this little stretch of Ordinary Time between Advent and Ash Wednesday. Anne behaved very well. She always loses it a bit right around the consecration, but I can always distract her by taking her to examine the nearest stained glass window more closely. While we were over there, following communion, one of the ushers came over to praise Anne for her good behavior. Our parish has the best ushers. There is this flotilla of older men that wear suits and ties and just look so dapper.

After Mass, Henry wanted to attend the open house the parish was hosting at the old school building. The building has been converted into a parish center, hosting religious education classes, a food pantry, parish offices, and a daily Mass and Eucharistic Adoration chapel. I was very interested in the chapel, as daily Mass is one of my favorite things in the world. The chapel is adorable and cozy, and for Lent I'd like to attend daily Mass at least once per week. More on that in a future post.

The kids and I enjoyed refreshments in the old gym before heading home to find a new (and working) garbage disposal, hurray! I also realized that Anne had snatched a little prayer card from the chapel with the name of an upcoming first communicant on it for us to pray for. She ultimately destroyed the card, but let's all pray for little Louis C. :)