Ok, I have a bit of a phobia about flying, and I haven't done so in many years. This, as you may suspect, is a bad combination. It makes the fear percolate and spread, like a fungus. Thus, on Thursday, I had a difficult time preparing for my trip. I told everybody that I loved them before I left, just in case, you know, I didn't make it back. I'm nuts like that.

I also just HATE traveling by air. The extra time you have to leave for airport hassle, not knowing what will happen to my poor beleaguered suitcase when it's out of my possession, the juggling act (that is the most charitable way that I can describe it) that is now the security checkpoint, the delays, the squishyness that is seating space on the airplane, having to travel hundreds of miles out of your way due to connections where you're then delayed even further, praying that your luggage makes it to your destination, all that good stuff.

Bear with me while I insert a quick factoid:

Travel time by car from my house in western New York to my sister's home in southern Maine - 10 hours.

Travel time by air from the time I leave my house for the airport to arriving at my sister's door in southern Maine - 9 hours.

The reason for this craziness is twofold: (1) there is of course no direct flight from me to Portland, Maine. We had to fly to Baltimore first. (2) my dad has tons of free tickets on Southwest (he's a business traveler) and Southwest doesn't yet fly into Portland, Maine. We had to fly into Manchester, New Hampshire and then drive 2 hours to my sister's house. This sucked. But the ticket was free, so how can I complain?

But the bottom line is that unless I'm going to Europe (or MAYBE Hawaii and Alaska; actually, I'm just crazy enough to want to drive to Alaska), I want to travel by car. You can leave when you want, stop when you want, eat and drink what you want, pack what you want, and not have to have someone frisk you. But I digress.

I will say that Southwest is very good. You don't have to pay to check a bag, they solidly have their act together with loading and unloading the plane, and they really try to be pleasant and stay on schedule. Their flights are all full, and I'm glad that their business is good. Although, perhaps they're trying to distract us from the fact that I SWEAR that there is even LESS space on the airplanes than there used to be. Did they add seats but yet not expand the airplane? It seems that way, but what do I know.

(1) Company. My parents traveled with me, and I was glad to have someone to talk to. It's soothing.

(2) Alcohol. WHY DIDN'T I THINK OF THIS BEFORE?! My dad had drink coupons.

Although, seriously, even for $5, people THIS IS SO WORTH IT. I assumed I would get just one of those teeny tiny bottles, but instead I got a full glass of Chardonnay.

Next thing you knew, I was chatting up a storm and feeling relaxed. Relaxed on an airplane? MAGIC.

The flights were actually pretty painless. 50 minutes to Baltimore, and then 1 hour to Manchester. The suckfest began with the rental car and the drive north to Portland. Ugh. By the time we got in, it was midnight, and I was exhausted. A cruel, cruel reality is that I get motion sickness and cannot read or knit in the car.

Anyway, I glimpsed the babies before we all collapsed into our beds, but they were sleeping so I didn't get nearly the baby time that I wanted.

The next morning, I was up early, bright eyed and bushy tailed, putting on makeup in the guest bathroom, a cat by my side, waiting for any sign of noise to come from my sister and brother-in-law's bedroom.

There commenced 2.5 days of near constant baby snuggling. 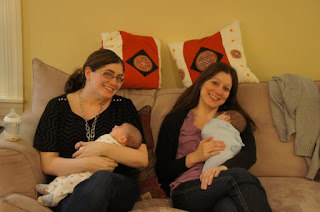 There was always a baby needing to be held, changed, fed, or soothed, which was just fine with me.

The baptism was Saturday, and it was lovely. I just LOVE the affirmation of our baptismal promises and the tenets of the Nicene Creed in the ritual:

"This is our faith. This is the faith of the Church. We are proud to profess it, in Christ Jesus our Lord."

Andrew is my third Godchild. I'm also Godmother to my nephew Nathaniel, who made his First Communion about a year and a half ago, my good friend Irena, who was a full catechumen at the Easter Vigil 2011 when I was 8 months pregnant with Anne and who converted from atheism, and now Andrew. I was also confirmation sponsor for Shauna'h, his mother. It's a very nice Catholic tradition that we have going on. I feel privileged to be their Godmother.

Our family are the last Catholics on my mom's side. My grandparents and aunt and uncles on that side are all devout Christians, but are no longer Catholic.  My dad's side though, has *more* Catholics now than in the past. I am doing my best to pass the faith on to my children and I pray that they do the same.

During the ceremony, the deacon did a lovely job. There were 2 other babies being baptized, and he asked everybody why they chose the names that they did for their child (all had at least 1 Catholic saint name) and asked about their baptismal garments. My nephew Will was wearing a gown that was over 80 years old, handmade by my brother-in-law's grandmother. Babies in the family have worn that gown in each generation since. Another of the babies was wearing an heirloom gown as well.

It all made me reflect on the history of our faith and how it's just as perilous now (when we're not being persecuted and beheaded, all that happy stuff :)) to pass on the faith as it's ever been. Today, it seems as if our enemy is indifference. I hope that I instill in my children and Godchildren how precious and special our faith is, and how we need to hold on to it firmly and passionately.

I very much enjoyed my trip, and the travel back was less bad. I was anxious to get home to my babies. Anne seems to have grown at least a foot since I last saw her, and is talking more than ever. As ever, she's extremely sassy and appears to be once again (please let this be over soon!) getting a new tooth. She HAS to be almost done; it would be inhuman otherwise.

A quick sampling of her new vocabulary:

(1) "Mine!" - Something that is most certainly NOT hers, but that she would like to be.

(3) "Ball!" - The child loves balls. This includes the giant red Target "dots" that they have outside the stores which I'm pretty sure are made of concrete and weigh as much as a herd of elephants. But yet, this explanation fails every.single.time when she sobs that we can't take the "ball" home with us in our car. Sigh.

I'm off the rest of the week, so no blogging for another short stretch. I will return on Monday with Thanksgiving and Black Friday tales. That is Cyber Monday, and is a big yarn sale day for me, so prepare for yarn talk. I actually dreamt of yarn the other day. It was all very cat-like.