A busy bee with Christmas shopping

In the spirit of the holiday (New Years resolution 2012: no crazy, chaotic Christmas season this year) I started my Christmas shopping a few months ago. Not a lot, but I picked up some things when I could so that we wouldn't have a lot to do in December. This also has the benefit of spreading out the expense.

Christmas is always tight for us financially. We live on a budget, and while we certainly have a sufficient amount to spend on entertainment and simply our "wants," we're always conservative about such things and watching our bank balance. Sometimes I feel like, being in our late 30's, we should be past this stage in our lives :) but alas, I think it is this way for many, many people. The reasons are manifold:

(1) Student loans. This is far and away the main reason, nothing else even comes close. I made a significant dent in mine even before Mike and I got married, and we've steadily chipped away at them over the years to the best of our ability, but it's a very depressing and humbling reality that it's going to take at least 10 *more* years before these are paid. I know that we are not alone in this burden. I'm grateful that we do not have credit card debt and we just put as much on the student loans every month as we can. Every time the principal balance shrinks I try to focus on the positives of that rather than how far we still have to go. That's all one can do.

(2) We own a house and thus have a mortgage. But I'm grateful for our house and the fact that it will be paid off in about 10 years is a cause to rejoice. I'm also grateful that although we own 2 cars they are both paid off, though we're going to need to replace at least 1 of them in the next few years.

(3) Our flexible jobs. If we were willing to move and for Mike to work more hours, we'd certainly be making more. But we want to be near our families and have one of us at home with the kids as much as possible.

Thus, Christmas is tough on our budget, especially now with 2 kids. Hence, this year I wanted to really focus on the thought behind the gifts that I give, rather than worrying about whether I'm getting each person "enough." I've found this to be very soothing on my peace of mind.

I'm making a few things, but I'm trying not to go overboard. I love homemade gifts, but last year I made myself nuts, so I didn't want that side effect either. The things that I am making are by special request so I know that the recipient will really like them. Otherwise, I've picked out 1 thing that I think the person will really enjoy.

With the kids it's tougher. You just want to give them everything they could ever want and watch their eyes light up. But of course, we won't, yet I still want Christmas morning to be fun for them.

What I decided to do was select their gifts very carefully. And even this winnowed down allotment added up quickly over at Amazon! We can afford it, but it's why December and January are so tough anymore. Each child is getting 3 gifts. Henry is receiving 2 Lego sets he's been wanting, plus a Super Mario Bros. K'nex building set, I think it's a race track. Anne is getting a talking zoo, a Fisher Price mailbox, and the Disney Princess Castle. Each child is also getting a few books, Henry a few movies, and Anne a tiny baby doll, for their stockings. I also have a few peg saint dolls for each child from Cam's etsy shop (I just ordered St. Joan of Arc and St. Patrick for Anne, she's taken a real interest in her saint board book and has fixated on those two; appropriate since one of her namesakes is St. Therese, and St. Joan of Arc was her favorite saint :)).

And that's it. I ordered a few books and movies for Mike that I know he'll love, and I made him a pair of socks recently. 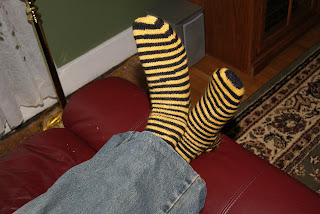 He's a Steelers fan. :) I still have a few other family gifts to procure, but I'm not stressing. I'll get a few at a time, and pick one carefully for each person.

I've noticed that I feel a lot more relaxed this holiday season. I don't feel all worried and frantic. And that's the way it should be.