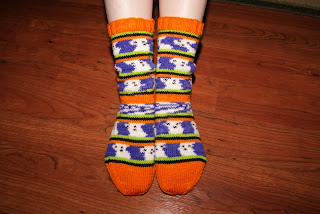 My ghost socks. Aren't they cute and scary? I love them. They're super warm and soft.

Anyway, back to real life. Halloween is always a mixed holiday for me. Right before we have to head out into the cold evening air I say to myself: "I hate Halloween." I just want to stay home in my ghost socks and relax. But it is not to be. So I was in a bad mood at the start of the evening yesterday. Let us chronicle my night...

I arrive home at 4:30 pm and pack Anne up for Mass. She always does great until after the homily. Last night, she did great until the responsorial psalm. That didn't bode well, but what could I do? I plied her with milk and some small penguin crackers as best I could, but next thing you knew she was squirming out of my arms and trying to eat the missalettes. I eventually got desperate and let her hold my cell phone (turned off, of course), which she drooled on and generally got all nasty. Toward the sign of peace I had to walk her around a bit, and luckily we made it through communion and to the closing hymn before we had to flee the church, Anne refusing to cooperate in getting her rain coat on. It wasn't her best performance, but I handled it well. We get home.

I'm starving. We wolf down turkey burgers and vegetables and the doorbell starts to ring. This is when the "I hate Halloween" vibe got started up for the year. Hank is bouncing off the walls, we have a sink full of dishes, Anne has crushed and thrown food on the floor, children are at our door demanding candy, and I'm just wishing that we could all go to bed. There's the Halloween spirit for you.

Mike tackles the dishes and the doorbell while I help Henry get his Darth Vader costume on. 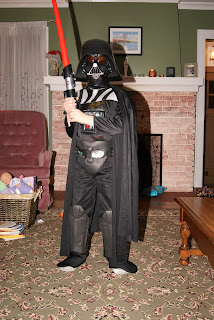 Next comes the wrestling match with Anne. I stuff her into a long sleeved Onesie and pink tights, which she immediately tries to yank off. I then layer her cupcake costume on. Within seconds, she had ripped the top half off. It was like that trick that male strippers do (not that I've seen a lot of them, I'm talking Saturday Night Live skits here) where they rip at their collar and their entire outfit comes off. That's what she was doing. Trying to put the little frosting cap on her head was an exercise in frustration and a near occasion of sin.

An attempt at photographs fails miserably. 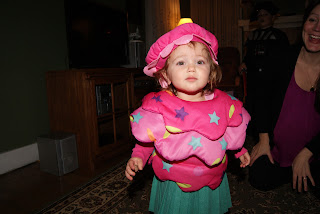 We head out. Hank is so excited he can hardly keep his mask on. Anne, of course, got accolades about her costume wherever we went, even without the frosting cap. Last year she was a ladybug and she was in good company. This year, she was the only cupcake and people really commented on how cute her costume was.

Meanwhile, I was so cranky that I had refused to take a jacket. Therefore, I'm freezing my ass off while Hank bounds about the neighborhood and Anne refuses to hold my hand and trips on sidewalk cracks. I demand that she hold my hand, but the instant I take my eyes off of her to aid Henry in some way the following occur:

(1) She tackles a decorative scarecrow and fiber optic vampire in someone's landscaping;

It was loads of fun. I will say that the kids had a fantastic time. Hank was beaming, and Anne squealed the entire way down the street. I don't think I've ever seen her so happy. Unfortunately, she now thinks that we can always waltz up the porches of everybody in the neighborhood and attempt to enter their home.

I noticed several parents toting what were clearly alcoholic beverages with them as they accompanied their children.

WHY DIDN'T I THINK OF THAT?!

At any rate, we made it home alive, Anne now being willingly carried she was so exhausted. Toward the end there I did start to enjoy myself. There is a unique feel to Halloween night that is different from any other in the year. One of the houses on our street featured a costumed Michael Myers, and I have to say, whoever it was was GOOD. I mean, *I* was scared! He had the wide-legged stance and the soulless, dead ahead stare down to a tee. It was creepy.

I was glad to get home though, and I couldn't get Anne bundled into a sleeper and into her crib fast enough. After Henry was also in bed, Mike and I watched an Alfred Hitchcock Presents marathon while I worked on another pair of socks. I was feeling much better. Halloween ended well.
Posted by Tiffany at 12:04 PM