Anne having a bad day 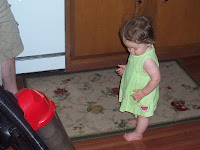 This morning, Anne was running around in her onesie, which is her outfit of choice for summer nights. And she's sleeping great, so I don't know what her deal is, but every.single.morning, she turns into Pod Anne: She Who Terrorizes the Household.

She'll usually play for a bit after her morning nursing session. But then, when I come downstairs from getting ready, the whining begins. I can usually pacify her with some Cheerios and removal of the safety latch from the Tupperware cupboard for her perusal.

After I eat breakfast, I pop her into her high chair for some cereal. She does this thing lately where she won't let you feed her (*swat!* *swat!*) unless she's also holding a spoon. Sigh. Once she refused further food, I took her out.

Well. She came running over to me, crying. She points to the kitchen table. I survey the options. Small bottle of fruit juice? It's sealed, so I hand it to her.

She glares at it. Then she glares at me. Then she TURNS AROUND AND WALKS AWAY without a word. When she reaches the other end of the kitchen, she turns around and runs back, sobbing.

She points to the kitchen table again. Bowl of Cheerios? They are offered. They are resoundingly refused. Stray toy? Another turn and walk away, with zero acknowledgement. Until she races back, of course, sobbing. Suddenly, she points to the table again, jabbering in an angry-like fashion. Cup? This produces a cackle. I put some water in it, and let her drink from it. She likes this. She tries to grab aforementioned cup, which I don't let her do, since it's full of water.

Finally, I empty the water and just hand her the cup. This makes her happy for a solid 2 minutes, which was a real coup this morning, seriously. Until she threw the cup in disgust and opened her mouth in one of those catroonish howls in which I can see her tonsils. Even picking her up and just holding her netted big rolling tears and lots of pouting.

It was just one of those mornings.
Posted by Tiffany at 3:21 PM