What's new with the kids? 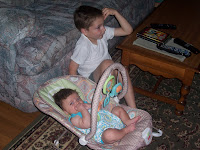 Yesterday was an incredibly long day, and it ended with me attending the parent orientation at Hank's new Catholic school, so I thought I'd detail.

I really, really like Hank's new school. There was zero mention of state standards and testing, which is just the way I like it. Instead, the focus was on the children, and the values/qualities the school tries to instill while they learn. The children are taught to be good listeners, to follow directions (both not Henry's strong points, definitely needs work on those), and to be kind and compassionate. There are certain milestones that the children are expected to master by the end of the year, but the approach is much more old fashioned and traditional than Henry's old school. It reminds me much more of the way school was back when I attended.

On each child's desk is a sticker with the Blessed Mother on it. And one wall houses a picture of each child with prayer hands holding a pair of rosary beads. I just loved it. :) It goes without saying that each classroom has a crucifix, I just also enjoyed these small details. And we opened with a prayer.

I really, really like the school. Henry is still nervous about being in a new school, but I can see it getting easier for him every week. He's starting an after school basketball thing today for one day per week through October and he's super excited about that. I think he's growing into things just fine.

And then there's our Anne. :) She's getting so big. She can really creep around now on the floor by flipping herself over. And she plays hardcore with all dangling toys. Whereas formerly she used to gaze up at her Sesame Street toy bar, I now find her under there giving Elmo a full body exam. And then it goes in her mouth. Very cute.

Last night she slept until 11:30 pm and then wouldn't go back to sleep, so she ended up in our bed again. Honestly, it's not as difficult to sleep with her in there as I thought it would be, and I do enjoy having her snuggled next to me when she does settle down and sleep. Which she has these past 2 nights.

They're both extremely precious these days.
Posted by Tiffany at 12:23 PM