Because I start off on my knitting monologue, I thought I'd update you on my sleep situation. Because I know you're all wondering about it, right? I mean, what else would you be thinking about on a Monday afternoon?

The consensus is that things are definitely improved, but in the grand tradition of baby sleep, they're still far from perfect. Friday and Saturday night Anne fussed less and less when I put her down awake. That part is going really well. Both nights, she got up twice to nurse between 7 pm and 6 am. No problem. I just had a bad omen on Saturday night when she didn't go back down for a full hour during one of the wakings. Aforementioned omen came to pass last night when she got up around 10 and by midnight was still awake. Given that Mondays are really long days for us (Mike also teaches on Monday evenings) I just brought her in bed with us. We all needed to get some sleep. She actually fell asleep next to me (which she doesn't always do; I think she was teething last night, she definitely wasn't feeling good) and I felt her rooting again around 3:30 am or so. So, she's doing better in terms of the number of wakings, but those 1-2 hour AWAKE! times are killing me.

Anyway, I think we should leave it as (we're being positive!) things are going better and last night was just a bad night. Those happen to even the best sleepers. Which my kids never are.

At any rate, we had a really nice weekend. I'm getting all of my holiday knitting organized, and since this is me we're talking about, I'm making it much more structured and complicated than it needs to be. I'm already starting to panic that I'm not going to get everything done. Because what's Christmas without a little hysteria?

Since this week is "Coupon Commotion" at JoAnn's, Hank and I headed there yesterday to look for a storage container for all of my interchangeable needle tips. I have a bunch of Knit Picks Harmony wood needle tips that I absolutely love, and they've gotten all messy in my lone knitting needle portfolio thing. I figured a little organization might spur me to knit faster or something.

So, we went, and I found an awesome plastic organizer that is designed for bead work, but since you can customize how large the slots are, it's perfect for my tips: 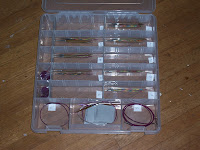 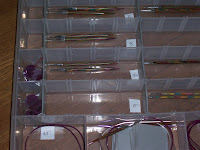 I'm able to fit all my tips in there (see my size labels? I'm crazy) plus the cables, end caps, and tighteners. I was so excited to put everything in there. I have plenty of room to add additional tips in other materials (nickel or acrylic) if I'd like, which pretty much means that's just a matter of time. Different types of tips will interact differently with different yarns. I tend to be a loose knitter, and so I like my needles to grip the yarn real good so that I don't look down and find a whole bunch of dropped live stitches (that sounds funny, "they're alive!!") on my lap. Hence, I have wood, but sometimes a little more slipperiness would be a good thing.

Then I took my zipper portfolio case and devoted it solely to my straight needles. A lot of knitters don't bother with straight needles (like these) when they have circulars, because you can knit flat items on circular needles. I happen to like straight needles, there's something very nostalgic and happily old fashioned about them, and so I still have a lot of them, mostly aluminum and a few wood. And finally, I took a quilty carrier that my grandmother had given me and organized all my double pointed needles (like these, they're very pointy aren't they?) in there. Again, some knitters never use these, they prefer to use circulars. You can knit small round things on the straight double pointed needles, like socks or baby hats. With circulars, apparently you can do something called "the Magic Loop" and use a really long cable to twist about and still make these smaller items. This all sounds very fantastical to me, and I like my double points, so I stick with them and try not to poke myself. Essentially, I'm just making things very expensive for myself, but I like to think of it as me being very versatile and a "well rounded knitter."

I did all of this while Mike was watching football and Anne was napping. Thus emboldened by my newfound organization, I selected a Christmas project to work on after the kids went to bed. I happily cast on and began increasing per the pattern. Pretty soon I discovered that I was knitting something on straight needles that was quickly going to become too large. Basically, I'm an idiot. I needed circular needles in a size 6, and when I went to my handy little organizer case, I found the size 6 slot empty. Panic set in before I realized that those tips are already in use on a sweater for Anne. This is what I get for having so many works-in-progress going at the same time. I think I just need more needles.

Anyway, since I'm going to have to deal with that little problem another time, I decided to make my Christmas neuroses even worse by taking time to work on something that will be for myself. I'm going to be knitting a fall/winter shawl for myself and I'm super excited to get started. I decided to treat myself and work on that.

But before I could do that I had to deal with all of the yarn that came in the kit for that project, which is in hanks. What does this mean? It means that the yarn must be wound before I can knit from it. And that's where things get interesting.

I have a ball winder, but I had resisted a yarn swift because they're more expensive. So, I'd have Mike hold the yarn while I wound. While this made for a very cute and amusing couples moment, it wasn't exactly quick and tidy. Well, in doing research last week I found that there are a lot of different kinds of swifts that I hadn't known about. I saw something about an "Amish style swift" and knew that I had to investigate. I could detail my fun little scavenger hunt about this type of swift, but I'll cut to the chase because, let's face it, you know I bought one. :) (it was only $30!) And here it is: 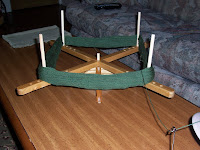 I kind of love it. :) It's very simple, and much smaller than an umbrella-style swift that I linked to above. It's just a wood stand with a wooden cross over it that spins as the yarn unwinds. The yarn is held by pegs that you can adjust depending on the size of your yarn hank. You can see the edges of my ball winder in the far right side of the picture. Once I got it set up, I started winding and voila! A center-pull ball of yarn that I can knit with. Xanadu!

After all of this, I cast on for the shawl, but suffice it to say I was exhausted after all of these shenanigans. I knit 6 stitches and then couldn't make heads or tails of a direction in the pattern to pick up stitches along a few sides of my weird looking knit rectangle and called it a night. But it was super fun. :)

And I'll conclude with a few pictures of Anne in the pumpkin hat that I made her, just because she's so adorable: 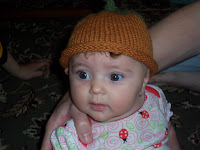 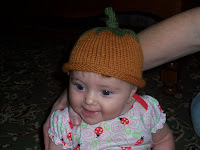 This, shockingly, turned out *smaller* than I'd have liked it. This doesn't often happen to people with the gauge of a tank. Hopefully, her head won't grow that much more before Thanksgiving...
Posted by Tiffany at 9:36 AM