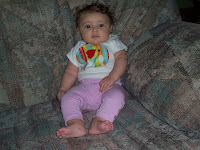 I was on a mission this weekend: I wanted to organize Anne's clothes.

I've noticed already a huge difference with regard to boys and girls clothes. For one thing, due to the generosity of family and friends, I hadn't had to buy a single Onesie for Anne since she was born. Her closet is overflowing with frilly dresses and pink sweaters. People seem to love buying girl clothes. I always love buying boy clothes though! I will grant, once they move from the toddler sizes to the boys, things do get less exciting. But I think the small clothes are super fun for both genders. Anyway, I digress...

Hank was so chubby as a baby (I just looked back at his baby records; he weighed 20 lbs at 4 months old!) that he lived in sleepers and an occasional pair of sweatpants. Anne, on the other hand, has a much more extensive wardrobe. And due to a total lack of time, it was a complete mess, which I just couldn't take anymore. So Saturday morning, I set Anne up on the floor with some toys next to me and set to work in her room.

30 minutes later, her drawers and closet had been transformed, and I had a shopping list of what she needed to fill in a few holes for the upcoming winter. Mike stepped into the room cautiously. He knows what I'm like when I'm tornadoing:

"How are you doing in here, Honey?"

"Great! Ok, there is a new system for Anne's clothes. Come over here so that I can demo for you. On the far left we have short-sleeved Onesies, and I've weeded out the ones that are too small. We have a few long-sleeved Onesies (a magnificent invention by Carter's for those of us that live in the Northeast) and here is the pile of pants. She'll be wearing a lot more pants now that the weather is cooler; see, like that pair of purple stretch pants she's wearing right now? On the right are her socks, bibs, hats and hair accessories. In the next drawer down, we have sleepers, arranged by size from left to right, smallest to largest. The burb cloths have now moved to this drawer over here. In the closet, there are sweaters, jackets, a snow suit, and all clothes that are 9-12 months, since those are way too large right now. I'm headed to Carter's now to pick up some more long-sleeved Onesies."

He just stepped aside to let me breeze by since he knew I was on a mission. Upon arrival at the store, Anne was sleeping, allowing me to browse to my heart's content. I immediately snagged 2 packs of long-sleeved Onesies, 1 pack of short-sleeved Onesies in 6 months size, and 2 sleepers that she totally didn't need but that I simply could not resist. One has a cupcake on the front. I mean, seriously? How could I not buy it? I have a bit of a cupcake theme going on with her. Just wait until you see the next hat I'm going to knit her.

In church news, I haven't blogged about it, but I have actually brought both kids to Mass with me in recent weeks. I'll say this: it's not as bad as it could be, but it's not fun. Nor is it conducive to actually hearing anything that goes on during Mass. Not that the kids are loud, because they aren't (right now, that is). But my attention is just so divided, I'm sweating the entire time I'm there. Yesterday, I just had Anne with me, since I allowed Henry to stay home with Mike to "help" him put in a new hot water tank. Anne was sleeping upon arrival, which is always a good thing.

About midway through the homily, I glance over into her car seat tote and my heart nearly stops beating because I see a pair of wide blue eyes looking back at me. She was actually quiet until the Creed, when I had to take her out. She did pretty well, actually. I was happy that she contented herself just looking around, since getting out the pacifier inevitably ends with a distinctive "plink!" two pews away when my head is momentarily turned, and an usher has to come to our rescue. She did really, really well.

Next week, I start Children's Liturgy of the Word again, so Hank will be in tow to "help" me set up and take down, and Anne will stay home with Mike since there's no way I could manage her while also teaching. I'm a little apprehensive, but I know how much the parish appreciates my volunteering for this, and I do like being involved. I just so often feel like I'm babysitting (10-15 kids!) instead of passing along any real catechesis, but I do what I can with it...

P.S. Anne's Onesie in the picture above was made for her by Allison of A Broken Fortress, who sells her handmade baby items at Lila's Locker on etsy. :)
Posted by Tiffany at 9:43 AM