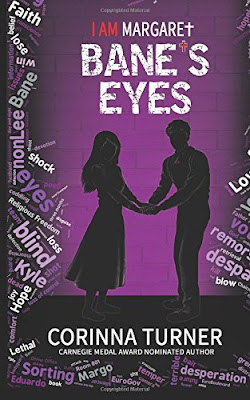 Hello all! I hope that this Wednesday is treating you well. I have a book review to share with you today, and it's one that I am very excited about. If YA, and dystopian fiction, are your thing, settle in with your tea, because you're going to want ALL the deets on this one!

A few years ago, I became obsessed with a Catholic YA series authored by Corinna Turner called "I Am Margaret." :0 This is a four book series that just wrapped up with the final installment a few months ago. On this humble blog I thoroughly reviewed book 1, "I Am Margaret," as well as book 2, "The Three Most Wanted."  OK, *seriouisly*...these books GRIP me. They are *phenomenal.* I have had book 3, "Liberation," queued up on my Kindle for some time, wanting to savor it, as I didn't want the series to end. Then I heard that the final book, "Bane's Eyes," had come out, and the publisher graciously asked me to review it. Thus, over the course of the past month I have been nonstop reading books 3 and 4. Unable.To.Put.Down.

Let's start with a little background information if you're as yet unfamiliar with the series. You won't be for long, I have a feelilng ;-), but until then, here is how things start out in book 1:


Look, if you don’t pass...” said Bane, “I’ll have to see what I can do about it. Because... well… I’ve been counting on marrying you for a very long time, now, and I’ve no intention of letting anything stop me!”

IN MARGO’S WORLD, IF YOU DON’T PASS YOUR SORTING AT 18 YOU ARE RECYCLED. LITERALLY.

Margaret Verrall dreams of marrying the boy she loves and spending her life with him. But she’s part of the underground network of Believers – and that carries the death penalty.

And there’s just one other problem.

She’s going to fail her Sorting.

But a chance to take on the system ups the stakes beyond mere survival. Now she has to break out of the Facility - or face the worst punishment of all: Conscious Dismantlement.

Go back and read the reviews of the first two books that I linked above, and you'll have a really good sense of the main characters and plot at play here. By the time book 4 rolls around, quite a bit has happened, and I don't want to give any spoilers!! So I'm not going to summarize the plot any further, except to say that our hero and heroine are in their Vatican sanctuary awaiting a global vote that will determine whether or not religious faith will continue to be suppressed, and whether Sorting (the harvesting of organs from the "imperfect" members of society for the benefit of the others) will be abolished.

Like I mentioned, no spoilers! I could talk to you for hours about the intricacies of the plot and character development, but I won't, because these books are SO GOOD that I want you to read them and discover these happenings for yourself. Samantha is reading them and so I have had her to text with nonstop as she progresses through the books. :0 (this could be you too if you decide to read them! Send me a message, we can coordinate ;-)) I do have some thoughts to share that won't spoil anything, so I'll have at it!

Both books 3 and 4 take us to a more mature part of Margaret and Bane's lives and relationship, and thus the content changes accordingly. A very natural discussion of fertility and sexuality within marriage is woven into the plot, in a way that is both appropriate and thought-provoking. As well, Margaret experiences more grown up relationship intricacies with her brother, as well as others within their core group of friends. The situation that they are living under is incredibly stressful, and this takes a toll on the way they all see and interact with each other.

At times, both Bane and Margaret got on my nerves in book 4. ;-) Indeed, they are 19 years old, and their behavior and reactions are quite normal for young adults of that age! That's what makes these books so very compelling. There is action, there is heart-pounding suspense, but in the end they are GENUINE.

Some of the more mature content of books 3 and 4 lend an excellent opportunity for discussion with your very own young adult if your child reads these books. I mentioned the sexuality issue above, which is handled perfectly in the books, and there is also a plot element that involves the effects of Post Traumatic Stress Disorder. It is not termed as such in the book, but it is definitely there. That part of the story also warrants thoughtful discussion.

As I got further and further along in book 4, I could feel my emotions coming quite close to the surface. This entire series gets into one's head and heart, to be sure, but as the story was winding towards it's conclusion, I could feel myself bracing for the knowledge of what would become of our beloved characters. Because I, and I would imagine you as well once you read these books, became very invested in the characters and the world that they inhabit.

I can wrap it up by saying this: the entire series, but book 4 in particular, is a story of redemption. And it is NOT in the way that I expected when the series began. At all.

When book 4 reached its climax, I started sobbing. They were both sad and happy tears, and I was powerless to stop them. The book moved me THAT MUCH.

The depth of my evoked emotion, as well as the highly unusual fact that I plan to re-read these books in the future, should lend this series my highest endorsement. All 4 books are now available through Amazon, as well as Chesterton Press. Via Chesterton, the print copies are around $20 each, and the ebook versions are $5, all slightly less expensive than on Amazon.

If you've read any of the books in this series, or plan to read them, please do write in with your thoughts!
Posted by Tiffany at 3:00 PM