Catholic Book Club: I Am Margaret 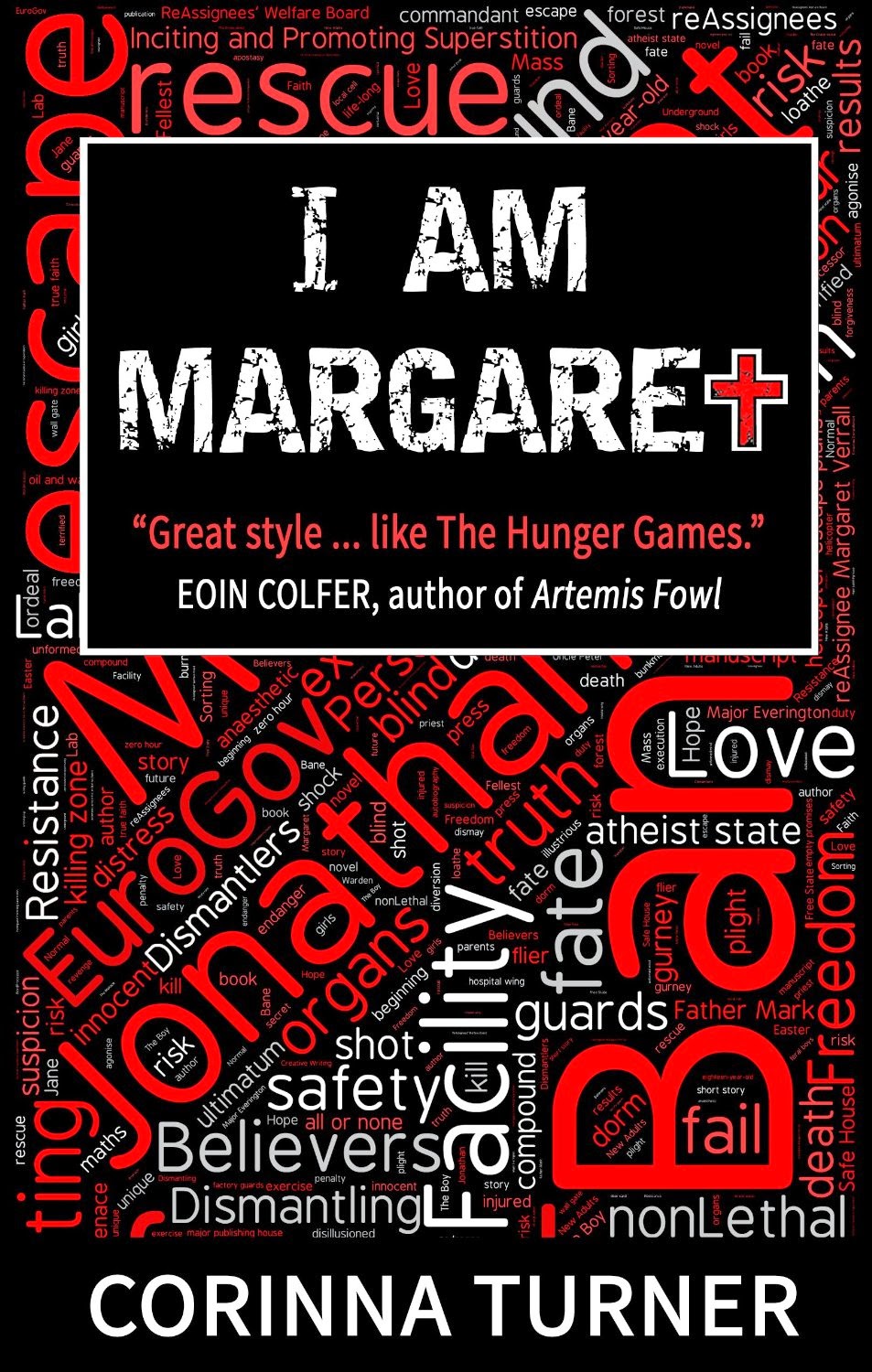 Happy Wednesday everyone! This week I am pleased to have another book review, the second of three Catholic Young Adult fiction titles I have been asked to review. Wednesday is really becoming our book review day, no? :) I may be ready for the third one by next Wednesday, we'll have to see. The kids really cut into my reading time. ;-) But I digress. Today I will be discussing I Am Margaret, by Corinna Turner, and you're going to want to settle in for this one, dear reader.

This book is written in the dystopian style that I'm certain we've all become familiar with lately via titles such as The Hunger Games trilogy, and Veronica Roth's Divergent series. This is a very exciting style and setting for fiction, and I Am Margaret is absolutely no exception to that. Plus, this is a *Catholic* book. There are Catholic characters. Exciting dystopian fiction with Catholics characters = not very common, my friends! I was so thrilled to start reading this book.

And so I did. Wham! Right from the outset, we are transported to another world, and I read this book very quickly, because I didn't want to put it down! I actually TOOK IT WITH ME TO READ AT LUNCH. People, I *never* do that. Why use up brain cells to remember to bring my Kindle to work when I could just waste time on Twitter while I eat instead? But this book grabbed me so much I simply HAD to find out what happened next.

This story is set in a futuristic part of the world controlled by an evil and anti-religion government that has convinced the majority of the population that only certain people should be permitted to survive into adulthood. Such people would be without physical ailments of any kind and can pass various academic examinations. The process to determine whether or not you are one of the lucky ones is called Sorting and takes place in young adulthood. Those that fail their Sorting are recycled. Yes, you read that correctly. :) They are taken to a prison to work themselves into prime physical condition, then they are murdered and their body dismembered, the parts used to service those who were permitted to live into adulthood. The population is repeatedly told that this is an admirable sacrifice for the good of society as a whole.

There is a resistance force, as you might imagine, as well as an underground Church. Catholics, of course, value the dignity of all human life, and the punishment for being what the government terms a Believer is severe: Conscious Dismantlement. I'll leave that to your imagination, as I'm sure it's running wild as I type. :) Our heroine is Margo, and she fails her Sorting due to her poor abilities in mathematics. Her and her family are part of the underground Church, even hiding Believers and priests, a very dangerous activity. She's in love with Bane, who passes his Sorting. From his position on the outside of Margo's prison, he plots for her escape.

Our main activity occurs in the prison amongst Margo, Bane's friend Jonathan (a fellow Believer) and the other teenagers sentenced to this fate.We get to see how Margo and Jonathan live out their faith in secret, and this aspect of the book made me appreciate the Eucharist anew. Only when contemplating trying to live ones faith without ever having access to the Mass and the Eucharist do I recognize how very lucky I am. The interactions between Margo and the other teenagers, and their interactions with the guards and others who are helping to keep them imprisoned, also raises tons of interesting fodder about Christian charity, love, and sacrifice.

Margo concocts a plan to try and escape plus save the others, and...wow, you have to read this book. :) By the time I got towards the end, I resembled a rabid dog with my obsession to get back to my Kindle and continue reading. When I finished, I realized that this book is the first part in a four book series and I just about died. I emailed Corrina immediately:

It's coming out hopefully before the end of the year, and believe you me, the instant it has a page up on Amazon it will be pre-ordered. Immediately. I.must.have.it. This is a highly recommended read, everyone. Excellent, for both young adults and adults alike. I can't wait for Henry and Anne to read this when they are teenagers. We can all learn to appreciate and cherish our faith more by reading stories such as these. And in the increasingly secular world we live in, that is a very good thing.

You can procure your very own copy of I Am Margaret via Amazon for less than $4 on Kindle (such a steal!) or $10.79 in paperback (eligible for Prime! :)). Via Corinna's web site, you can read the first chapter for free,*definitely* check this out.

Has anyone else read this book? Dude. Leave a comment, I would love to know your thoughts!

**I received a copy of this book in exchange for an honest review.
Posted by Tiffany at 1:34 PM