Morning everyone! It's the Monday following 4th of July weekend and I'm back at work, sigh. It's raining pretty heavily here, which feels appropriate. But I had a lovely weekend interspersed with the usual bumps in the road of toting small children along for the ride. I'm sipping tea, do you have yours? Let's chronicle!

I took the day off from work on Thursday July 3rd, and we really spent it just puttering around the house. The weather was just beautiful - sunny, but not humid and hot, so I took advantage of it and snuck walks in each day while Anne napped in the afternoons. I did also work on crafting, like I had hoped. Not exactly related specifically to the holiday at hand, but that's never stopped me before. :)

I'm working on a rosary for my nephew Will for his birthday, similar to this one that I made for Andrew, which is this one:

Will's will have a Guardian Angel centerpiece, and teal crystal Paters, but will otherwise be identical. I got the first decade of that assembled this weekend, glory. I also made myself a pair of pink earrings to match my troupe dance costume for all the festivals we have coming up: 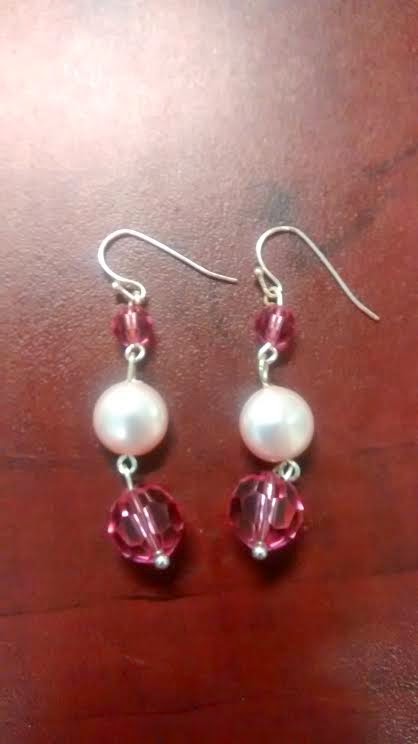 I struggled a bit with turning the loops. I had to go back and redo them a few times since the second earring originally turned out WAY longer than the first one. Not exactly a good look. And I'm familiar with this phenomena based upon knitting sweater sleeves that are different lengths from each other. Let's continue to repress those memories, shall we?

I also made these fun additions to my jewelry drawer:

The first one I made turned out like yucky poo, so I had to start again. When I finished, I brought it over to Mike and asked him what he thought it looked like, with zero foundational information.

Easter egg earrings for the 4th of July. I'm nuts.

So that was my beading work this weekend. I also was knitting, and trying to finish this summer dress scarf I'm making for myself: 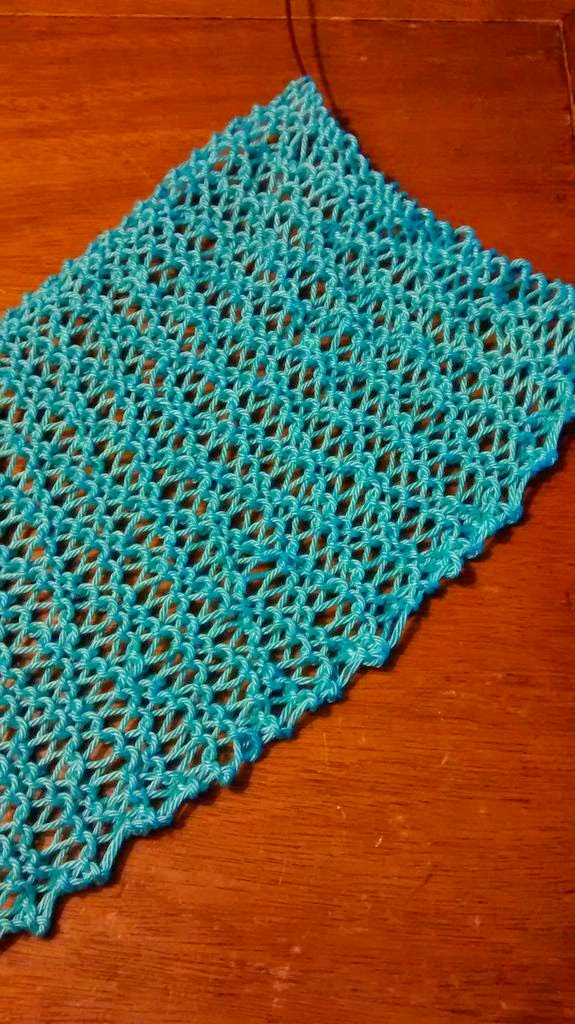 I'm thinking about stitching the ends together when it's done and having it be a cowl. Thoughts?

I've also been commissioned by a troupemate to crochet her a modesty panel for one of her costume tops, so I got that done too. I just need to sew a crystal onto it and stitch it into her costume. Niche business getting started up right here. ;) I'd like to get that and the turquoise scarf done in the next few days.

Ok, so back to July 3rd. I did happen to be wearing the patriotic rosary bracelet that I made for myself: 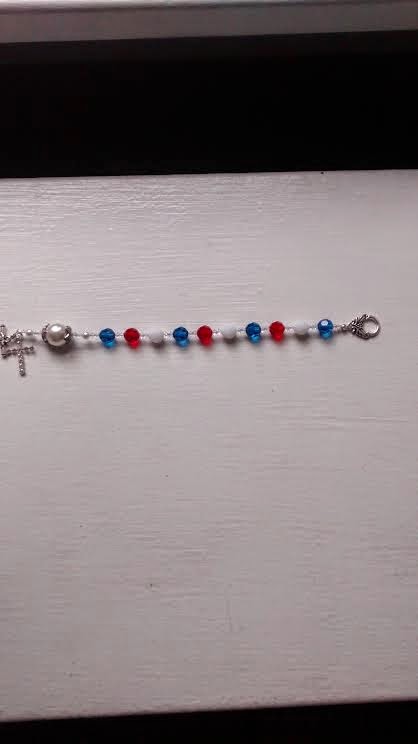 Anyway, we decided to go to the fireworks that our town was hosting on the night of the 3rd. We haven't been to fireworks in years and years, and every year I regret not going. We thought the ones on the 3rd would be a bit less crowded (because the number of people that we have to encounter seems to always be the most important factor in the decisions we make about where we go #introvertfamily). I decided to leave Anne sleeping, my mother-in-law came over to listen for her, and Mike, Henry and I departed.

It *was* crowded, but nothing too terrible. We even got a seat on our own bench. And it was kind of nice to feel a part of the crowd, like we were sharing in a community experience, which of course we were. The only problem was that it was FREEZING. Fireworks don't generally start around here until 10 pm (I'm certain it's similar in other areas) because of how late the sun sets at this latitude in the summer. So the time combined with the fact that the weather in Western New York is just generally unpredictable, plus the fact that we have little fireworks experience, meant that we really weren't dressed warmly enough to be comfortable. We shivered for about 20 minutes before the display started, and I started to lost my fireworks enthusiasm. However, we stuck it out, and I'm glad we did. Once the show started, the distraction made me forget how much my teeth were chattering. And then I regretted leaving Anne behind. She was sound asleep, but next year I'll have her stay up. She would have loved it.

On the 4th itself we didn't do much except take the kids out to lunch at our new Firehouse Subs:

We had fun, and both children were really well behaved. Little wolves in lambs' clothing. The rest of the weekend they fought like cats and dogs and made me contemplate listing them on ebay. Anne, in particular, is SO, SO SASSY these days. And she SHOUTS. At her brother. All.the.time.

It's miserable. And if you ask her to stop screaming, she says that she is in fact NOT screaming. She is just "yelling at Henry."

So, we were fielding that for a large portion of the weekend. She's very much in the age 3 end of the Terrible 2's and we're just weathering it as best we can.