Hills, malfunctioning showers, and lots of family picnicking, on the 20th Sunday of Ordinary Time... 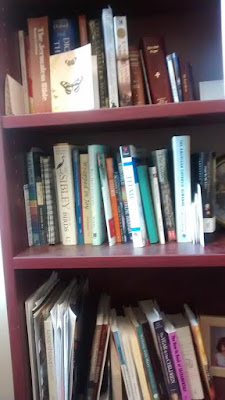 Well hello there, dear reader! It's been a bit of a busy stretch over here in Catholic Librarian-Land, and you'll notice that it's been nearly a week since I last posted. I don't like doing that, but life is like a box of chocolates, is it not? ;-) It can be unpredictable, for sure. The start of the fall semester is nearly nigh, and thus I am drawing closeer and closer to full blown Panic Mode. I'm certain that I will be tornadoing around the library next week, but I'm trying not to worry about that now. :0

For the time being, I prefer to panic quietly in the privacy of my office. And *finally* I had a few moments to sit and chat with you all.

This past weekend Mike, the kids and I traveled about 4 hours south into Pennsylvania for a family picnic. This is on Mike's dad's side of the family, and the people are all perfectly lovely and kind. The only problem is that I find it incredibly awkward to socialize with family that I see very rarely. Is it just me? I actually find it EONS easier to converse with total strangers than I do in the family picnic scenario. I cannot explain this phenomena, but there you have it.

It's interesting, because I think that over the course of the past 3-5 years, I have become a LOT more social than I used to be. When I was a young child, I was downright painfully shy. Talking to anybody outside of my close circle of family and friends created a tremendous amount of anxiety within me. In high school, I was voted "Shyest" female in my senior class. The guy who was voted "Shyest"? Had never spoken with him before. Because, you know, we were both SHY. ;-)

Now? Quick anecdote. This past Friday, I had dance troupe rehearsal, like usual. We're currently a group of 7, and we haven't had any new members for a few years. We've remained mostly consistent, but lost a few members about a year ago who decided not to continue. Well now, finally, there are a few dancers from the mixed level class that Claire is going to ask to move up. She was telling us a little about each of them, and regarding one woman in particular, she said:

"She's real quiet, doesn't say a lot. You know, how Tiffany used to be."

This really made me feel happy. Indeed, dancing has helped me to gain confidence and come out of my shell quite a bit. I talk readily to people now, and happily join in the social revelry that is our troupe class on Friday evenings. There is nothing wrong with being shy, but in my case I know that I was that way based upon fear. Now, I don't feel afraid anymore, and enjoy my life so much more. I just occasionally feel awkward when conversing with out-of-town family. ;-)

At any rate, back to our trip. The picnic went well, and the kids had an absolute blast playing with their second cousins twice removed, or however you term such distant cousin relationships. ;-) The kids also LOVE staying in a hotel, in contrast to Mike and I, who, when accompanied by our offspring, brace ourselves for this very same eventuality. There is the inevitable bouncing on the bed. The racing around a tiny space. The constant flushing of the "new" toilet and experimenting with the water flow in the sink. The 6:30 am wake up (while on vacation, mind you), wanting to go down to the breakfast area in the lobby. I suppose there are SOME things in life that are in fact predictable. ;-)

As for me? I love my romantic hotel getaways with Mike each year for our anniversary, but this family adventure to the nearest Holiday Inn Express?

*turns dial a fraction of an inch in the opposite direction*

Let's just say the shower appeared to have 2 settings:

(1) Roasting Hot Dogs With Satan, or

(2) Your Own Personal Penguin Will Be Joining You Shortly

And so it seems to go on such hotel-laden trips. ;-)

We did make it to Mass on Sunday morning, which was lovely. The church was super close to our hotel, but given that we were in Pittsburgh, this was no easy trek. I'm from Western New York, and unused to hilly terrain, OK? :0 I struggle whenever we go to Pittsburgh to get over: (a) not having any sidewalks to walk on, because I love getting my exercise that way, and (b) having the roadways be so steeply inclining or declining. How do people make it out of their driveways in the wintertime?! At any rate, the church was close to the hotel, but it was DOWN, and a large shopping center which contained the only access point to the hill on which the hotel sat (I am not making this up) stood in the way, so drive we must!

We arrived, and Henry immediately commented on the stained glass windows, which he liked. He commented on them because they are much different from what we usually see, in that they were of the abstract variety. I prefer non-abstract stained glass, but to each their own. Mike glanced around as we planted ourselves in the padded pew, and whispered:

Why yes, yes it was. :) But it was a nice parish, and I will say that they had tremendous bathrooms, which I of course toured with Anne, who very predictably had to make use of them during the recitation of the Creed.

So there you have it, our weekend. I will be with you tomorrow for Tea Time, which I'm looking forward to. How was YOUR weekend, dear reader? What's going on with you this late August?
Posted by Tiffany at 10:52 AM