Lots of crying this weekend, for various & sundry reasons...

Happy Tuesday everyone! Life has remained quite busy for me, as I'm sure it has for you as well. But importantly: LIFE IS GOOD! It really is, despite the fact that I cried a lot this weekend. ;-)  I'll tell you all about that in a minute, but don't forget that tomorrow is book club day! We'll be discussing the second half of Church of Spies. Do join us!

So, the weekend dawned quite hot and humid over here in WNY. On Saturday I was slated to dance with my troupe at a cultural diversity festival, and later have a date night with Mike. A fun agenda, indeed.

We arrived at the festival at 1 pm sweltering in our long red costume gowns and coverups. We gamely traversed the street booths, looking like a roving pack of traveling psychics I am sure. ;-) At least that's what someone told us recently about our coverups. We spotted a tiny, rickety stage and paused in quiet horror:

"Is that where we are supposed to dance?"

There are 7 of us. Tiny, rickety stages do not bode well.

"No, they said the *main* stage, near the end of the street. I think we have to walk further."

We proceed on, and soon thereafter find...the "main" stage, which while slightly larger, also looks like a stiff breeze could blow it straight over.

We sweated over in a tucked away corner, while a local Colombian troupe we're familiar with started to dance. The stage did in fact accommodate the handful of them just fine, so we breathed a bit easier as we sipped our water. As for me, my seasonal allergies were going BALLISTIC and I was all stuffy and sneezing left and right. The Colombian dancers finished, and we were hustled to the stage. Which had no stairs, but that's another story.

Our Shaabi piece was up first, and it went just fine. The stage had lots of grooves in it, which we quickly learned to to avoid, and it creaked a bit, but other than that no signs of immediate collapse. ;-) A nice little crowd began to assemble to watch us.

Claire danced after that while we rested, and then we were up for a longer group segment. Our set length was only 15 minutes, so we didn't have too many numbers packed in. This last bit though was three separate choreographies.

First up in this mix was our Saidi cane piece. Cane balanced on my head for the beginning and was generally well-behaved, so all was well there. By this time, a LOT of people had gathered to watch us, including a small crowd of Muslim women. They LOVED us. :0 They enthusiastically cheered us on the whole time and gave me a thumbs up when I caught their eye. I loved them right back. The crowd was really great overall.

A lovefest right? Well, yes, but there was one small problem. My allergies suddenly sprang to life once again, and left eye began to water uncontrollably. Not exactly an easy thing to manage while up on stage with a cane balanced on my head. :0

My eye started to blink in a spastic-like fashion. I did what I could to wipe it during short spots in the choreography where I wasn't facing the audience, but Eye didn't exactly like that either. I had natural tears going on that soon mixed with the sweat and sunscreen also present on my face, and it was a whole bad Salty Tear Party going on. When I swiped at it, the salt and sunscreen just caused my eye to water MORE.

By time we moved into our pop song/drum solo combo, the situation was quite disastrous. With us being up on a stage, I just hoped that nobody noticed and thought I was crying. I also beamed as best I could while trying not to allow my nose to run. Glamour, all glamour over here. Although things were going smashingly well, I was dying for the set to be over.

When we finished, we had several requests for photographs, which we loved. Naturally, Eye was JUST FINE the instant we stopped dancing. :0

Putting the psychic coverups back on was completely gross with all the sweat, another glamour point in our favor. So after we finished taking pictures, we hustled back to the air conditioned cars.

I spent the afternoon cleaning up and spending some time with the kids, in preparation for the big date night. This part of the story thankfully does not involve any crying. ;-)

The kids went out to dinner with their grandparents, and Mike and I walked to a local Italian restaurant. Fabulousness. I mean, just look at our drinks: 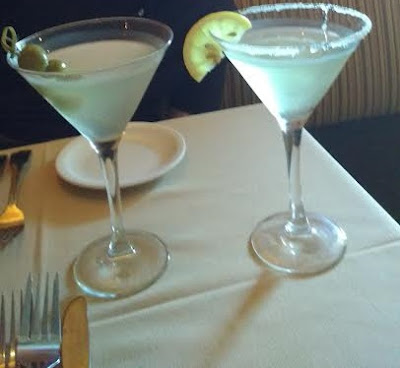 Mike's is a vodka martini, and mine is a lemon drop martini, made with homemade Limoncello.

That's sugar around the rim of the glass, indeed. Wonderful night.

Sunday we went to 11 am Mass, and the congregation was awash in talk of the upcoming capital project to build a small parish center to house events and religious education. The old school building has been sold, so this is the proposed solution. I think that it'll be really nice, much more economical than maintaining the other large building, but as in any major parish project such as this, there is bound to be some drama. ;-)

Later in the day, after the kids went to bed, Mike and I watched Valkyrie.This is very Church of Spies inspired, given that I just finished the book last week and there is overlap in the events between the book and the film. This is where the second bout of crying came into play. :0

Man. Hard to watch, given that we know how it ends. Good men, just trying to spare the lives of other innocent people.

I found it very moving to watch the film, and even with my poor memory for names in books and films, I recognized several from Church of Spies. I've been thinking about it quite a bit since Sunday night, it really made an impact on me. How much are we willing to put ourselves at risk to fight against evil and come to the aid of others?

Powerful. I am looking forward to discussing the book with you all tomorrow!