Hi all! Gosh, it's been a busy week. A pretty good week, mind you, though I have to admit that I feel a little what I term "wimpy." That's what I call it when a person feels a bit fragile, a tad vulnerable, not feeling 100% physically. There are a multitude of reasons:  the kids going back to school soon, the semester starting up and subsequent work craziness descending on both Mike and I in just a few weeks.

So I'm hanging on to my 54 Day Rosary Novena like a life raft and trucking on. I think I'm also going to pray the St. Monica novena this year, which begins next week. More details on that to come!

At any rate, some fun stuff from the weekend to report in to you about. I know, I know, it's Wednesday already, what took me so long?! :0 I do what I can. ;-)

This weekend I spent lots of quality time with my cute Mike, and our ever unpredictable offspring. First up we have the Very Serious Henry:

And the Ever Sassy Anne:

For the most part, Henry was low maintenance this weekend, as he usually is. Our daughter on the other hand...you know, she's 4. Mass these days? SO MUCH WIGGLING. It doesn't help that the Children's Liturgy of the Word program is on summer hiatus until after Labor Day, so she's in the pew with us the whole time:

"MOMMY. Why is Father Joe doing THAT?!"

"Shhhhh, we need to whisper, Honey, or better yet, wait until after Mass to talk."

"I HAVE TO GO TO THE BATHROOM! RIGHT NOW MOMMY!"

"Anne! You are SO LOUD!" That would be a beleaguered, long suffering Henry.

In a thrilling discovery, though, after we got home: an Amazon package was awaiting me! Given that it was Sunday, I was rather surprised. I quickly squirreled it away, as I knew it contained a future feast of St. Nicholas gift for Anne. Last week, Shining Light Saint Dolls was having a sale, and thus I procured Our Lady of Guadalupe for Anne. When I had a moment to myself, I pulled her out and found her levitating:

But after a soothing session with me, she was as good as new: 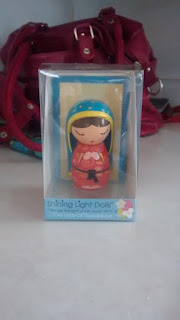 It seems that their Amazon store is a bit cleaned out now following that sale, a bit of a bummer. But their Facebook page mentioned that they are restocking with new dolls, so keep your eyes peeled! These are nicely made, plastic dolls for smaller children. I have a beautiful wood St. Nicholas doll on order for Henry's feast day gift, so everybody is receiving a saint this year, like usual. ;-)

After I tucked Our Lady of Guadalupe away, Mike and I trudged out to our poor, beleaguered garden. To say that we do not have green thumbs would be the understatement of the millennium. We usually manage to keep a few tomato and pepper plants alive until the fall each year, but this year we got a little overambitious and also planted cucumbers and small melons.

Next thing one knew, we had vines climbing up our fence and attacking the other plants. Bad, so bad. And apparently grape tomatoes think that they can just take over the world by spreading their leafiness over top of the entire garden and sucking up all the sunlight. It wasn't pretty.

I felt guilty (because Mike loves those tomatoes) but I encouraged him to take one of the tomato plants out. We would still have one tomato plant, but there was no way anything was growing with the wild, feral situation we had on our hands. So he did, and also beat back the other plants a bit. And now the remaining tomato plant looks like the garden version of Charlie Brown's Christmas tree, and the melon vines put out some sort of liquid that gave me hives. So you could say that things are not going all that great back there.

On the up side, we found two gigantic cucumbers hiding amongst the forest-like conditions:


...and we are getting a nice crop of sweet banana peppers. The bell peppers, not so much, but you can't have everything. I wish I had asked him to take out the melon plant instead, but there really was no way to even GET to it with the way that the tomatoes were growing.

In other news, Monday morning found me strengthening my resolve as I entered Anne's room to get her up for the day: I was going to push the issue of her heading to the bathroom first thing upon getting out of bed. Anne has been potty trained for a few years now, but through the night? An absolute OCEAN of pee pee. So we still buy diapers and she wears one overnight. Lately though, she's woken up dry a few times, so it got me to thinking that she may be moving towards being able to go through  the night. Only one thing gave me pause: her bad habit of "not having to go pee, Mommy!" when she first wakes up:

"Anne Honey, the entire WORLD needs to use the bathroom when they first wake up. You are not going to be the lone exception."

I wanted to push this a bit, figuring that if she develops the habit of peeing right when she gets up, she may start to be dry on most mornings. If not, so be it. I know that some kids take a long time to be able to go through the night. But this is a bad habit that needs remedying, regardless.

So Monday morning I pushed the potty, and Anne pushed back. No potty, no sir. As expected, tears became involved in this process, as well as a refusal to even get dressed or cooperate with a single thing that I asked of her. Eventually, I went downstairs, and Mike volunteered to take a turn.

Next thing I knew, I heard the toilet flush and see a cheerful Anne coming down the stairs, fully dressed. When it was Daddy, you see, she was willing to pee and cooperate. An inadvertent Good Cop/Bad Cop situation. ;-)

For the remaining time until I left for work, it was clear that Mike was The Favored Parent. She bustled about, fetching him a napkin and offering to get him juice.

Yesterday morning was more of the same, but today we had a good experience, and she cooperated without too much complaint. We'll see how this turns out.

So dear reader, any nighttime potty success stories you want to share? Are you a gardener who wants to shed some light on my abysmal gardening skills? :) Have you got your saint doll list together and ready for the early ordering season?! Do chime in!
Posted by Tiffany at 10:30 AM