"Are we THERE YET?!" Fun family adventures in the car...

Hi all. I'm going to be up front and admit that I am far too exhausted to even begin finding an image to go with this post. It's just that kind of stretch for me right now. ;-) And the weekend, well...it had its pluses and minuses. I'm trying to look on the bright side of the minuses. So why not settle in with your tea, yes? I need to go brew mine, one sec...

That's better. :) Oh, and look, I worked up some Canva energy: 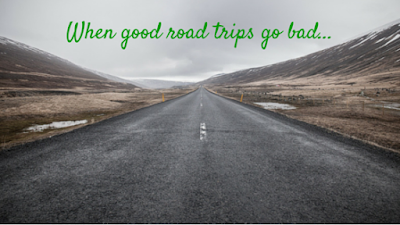 OK, so Saturday. I haven't even started writing the details yet, and I already heaved a long suffering sigh. It was like this: Mike and I decided to surprise the kids and get us all tickets to Medieval Times. Super, duper fun, right? I've never been there before, though Mike has been to the location in Orlando. We don't have a local one, but there is one in Toronto, which is about an hour and a half drive for us. The tickets were discounted for the end of the summer, and we figured PERFECT! We bought the tickets, loaded the kids up in the car, and off we went.

I think that this is a lesson in when when things seem too good to be true, and all that? Yep, that. :0 We headed to the Canadian border. Only a small wait, no problem. We drove north. Also, no problem. An hour later, we are on the outskirts of Toronto and here is where things turn ominous. There is a LOT of traffic coming from the other direction. Glad that's not us!!!

As we exit the Queen Elizabeth Way, we become ensnared in a traffic jam. No sweat. This is The Big City, traffic is normal, and we left nearly two hours of buffer time before the show started at 4:30. We knew that this particular location of Medieval Times had no parking lot, so we were at the mercy of public or street parking, and we built in plenty of time.

We missed the street we were looking for, so we had to press on until we could turn back, inching along all the while. By this point, I really need to use the restroom, but didn't want to say anything, because I figured we were almost there. Right?

Let me make a long story short: It took us over an hour from that point to even approach Medieval Times due to the traffic, and parking? Nonexistent. And do you want to know why? The Canadian National Exhibition. In Toronto. Which we hadn't realized prior to that moment. :-\ Cars EVERYWHERE. It was taking us twenty minutes to move less than a mile. No wonder the tickets were discounted.

And when I say that parking was nonexistent, I'm not using hyperbole. There were public lots charging an exorbitant amount to park there. We were willing to pay it. And they were FULL. Street parking? I won't even bother snorting out loud, the idea is so preposterous. There was nothing.

At first, we had held out hope for a lot, and so navigated somewhat away from Medieval Times in our quest. By the time we realized the dire nature of our situation, it was far too late to salvage our tickets. Mike couldn't even drop us off at that point and lose just his ticket sitting in traffic. The kids and I couldn't even walk to the place from our current trapped location, and the show was starting. So after our hour and a half drive, we spent two additional hours in traffic. All to no avail. Right in the heart of the city, the snarl was so bad that we were moving millimeters at a time. We were imprisoned in traffic, and made the difficult decision to abandon hope of getting to Medieval Times.

Crankiness abounded in the car as we finally were able to get back on the highway. The kids were disappointed. My bladder was about to burst. And we still had an hour and a half drive home. Good times.

"Do you want to stop for dinner somewhere?"

Mike was trying to cheer me up.

"I want to go to Swiss Chalet."

The kids weren't the only ones who were cranky. :0 And at that point, Swiss Chalet was the only thing that could make me happy.

I'm certain Canadians probably wonder why I have such a love affair with a casual chicken and ribs restaurant, but there you have it. It's a Canadian based chain, but we used to have a few in WNY when I was growing up. I LOVE their food. But the American locations all closed some years ago, and so the only way to get my Swiss Chalet fix is to cross the border. Which does seem a bit extreme for a simple quarter chicken dinner, I will grant. But want to know the secret? Their Chalet Sauce. That stuff is like an addictive controlled substance to me. And it's hard to describe. It's thick, like barbecue sauce, but it tastes different from any other sauce I've ever consumed.

We found a Swiss Chalet sign off the next exit and exited. We were soon ensconced at a table, me ordering my chicken dinner with delight. Usually, when french fries are an option with a meal, I choose something else. Trying to eat healthy, and all of that. But I am a firm believer in balance, and sometimes you should allow yourself to eat the food (even if it isn't the healthiest option in the world) that you enjoy. At Swiss Chalet, I always order the fries, because then you can dip them in the Chalet Sauce.

We let the kids order whatever they wanted, trying to make up for the disastrous afternoon, and soon they were both happily sipping some sort of S'mores milk with marshmallows. Henry and Mike both ordered chicken as well (Anne opted for cheeseburger sliders) and so when our food came, the waitress delivered three bowls of Chalet Sauce. Henry didn't want his, so I quickly co-opted it. Mike was dubious:

"What are you going to do with all that sauce?"

Oh he of little faith in The Power of The Chalet Sauce. We were all starving from our ill fated road trip, and made quick work of our meals.

"How's your chick...wait. Where did all that sauce go?"

I seized the opportunity with him being distracted to dip a fry in his own cup of sauce.

Clearly, we need to indoctrinate him further on the Ways of the Chalet. By the time we had all eaten, we were feeling a lot better. We still had over an hour to go in the car, but it was much easier to manage going back.

Later, after the kids were in bed, Mike and I had cocktails and watched "Wayward Pines." Although the day didn't go as planned, we made the best of a bad situation.