Well, HELLO THERE, you dear reader, you! I have missed you.

I had quite the busy weekend, and I imagine you did as well. I'd love to hear about your weekend, and I'll also tell you about mine. So why don't you settle in with your beverage and we'll chronicle together, shall we? 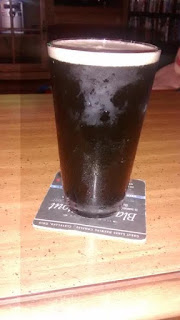 Well, OK, that's not what I'm drinking NOW, at 11 am, but it was what I was drinking Sunday night while watching the FIFA Women's World Cup championship game with Mike and Henry after a super long weekend with the youngest member of our clan. OK truth? I had TWO. It really wasn't that bad, just long, did I mention that?

Let's start back on Thursday night because, for unfathomable reasons, that's when our town did fireworks. Being only July 2nd, it seemed rather early to me, but we went with the flow, and for the first time we brought Anne. This meant keeping her up for an excruciating 2.5 hours past her usual bedtime, but we were strong.

Mike and Tiffany: 1
Children, led by Anne the Crankinator: 0

Both children were somewhat surly by our designated departure time, but again, we persevered. Finding a parking spot was a near occasion of sin, but we managed. We trekked to the community field.

Both kids relaxed then since they could run around a bit. The fireworks began. Anne immediately jumped into my lap and covered her ears.

She refused to budge for the duration, cutting off circulation in my arms.

The fireworks were lovely, and even traumatized Anne seemed glad that she went. But I was just relieved that it was over. :)

Friday? Let's just say Friday wasn't a good day. The kids fought the entire day, ruined a lunch out at a local restaurant, and generally made the adults miserable.

Mike and Tiffany: 1
Children, led by Anne the Instigator: 1

I drowned my sorrows in my knitting, and finished a brightly hued hat for myself: 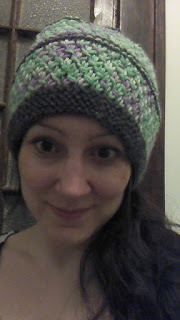 I will grant, it's not exactly hat weather right now, but I know I'll be very grateful for these efforts come fall. ;-) I also crocheted a hat for my nephew, and I'm hoping it won't be too big for his little head: 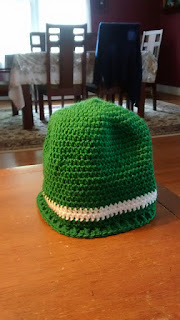 Naturally, Anne refused to try it on, which would have been super helpful since she's only a year older than aforementioned nephew. Some battles, however, just aren't worth fighting.

Saturday was a better day, capped off by Mike and I enjoying some film noir that TCM is showing this summer. The night drew darker and the film noir happily creepier, when suddenly:

Why yes, yes it was. Wide awake, standing up on her bed and watching fireworks out her window at 10 pm. Suddenly, she wasn't scared by the noise anymore, just fascinated "by all of the pretty colors, Mommy!"

It took some doing to get her back to sleep. Thus, guess who was super grumpy just in time for Mass the next morning?

"Anne, you can't lift your dress up in public, Honey, come sit down on the pew with me."

Mike and Tiffany: 1
Anne the Grumptopus: 3

After Mass, both children and I lit one of the new candles at our parish. Due to cost of the traditional wax candles, a decision was made to replace them with battery-operated candle-like cousins. I don't dispute that cost is an issue for the parish, certainly, but I have to admit that lighting one of these "candles" is rather anti-climactic:

"Go ahead and put the money in, Honey. Right there, you may have to fold it up."

We all look forlornly at the now "flickering" electronic candle. Not nearly so symbolic as lighting the little wood stick from one of the other candles and setting your chosen candle aflame, the smoke rising to heaven. Bummer.

The rest of Sunday was quite lovely, if a bit action-packed. The four of us loaded up and headed about 20 minutes north to visit and have a cook out with my parents. We arrived in the late afternoon, and the instant we got in the door, the children wanted IN THE POOL. And pools with kids are, you know, a bit of an entity. There's the swimsuit tugging on process, the application of sunscreen amidst a chorus of protestations, and the inevitable "I have to go PEE!" the moment everyone is in the pool and soaking wet.

If Anne goes in the pool, that means that I must go in the pool too, and I don't really love going in pools. My current bathing suit was purchased, no lie, LAST CENTURY, and while it still fits, it's seen better days. I'd much rather sit by the side of the pool sipping a cold beverage, but such is my lot in life with a 4 year old right now. Mike always gamely gets in to roughhouse with Henry, so I took on Anne. Immediately, it was clear that my little swim session would be anything but relaxing.

Anne had on brand new water wings, but decidedly did NOT take to them. She instantly suctioned her little body to mine and hung on like a koala, complaining the whole while. We remained in that position for quite some time before she finally worked up the courage to branch out a bit. By the time I was feeling wrinkly and ready to get out, she was in full on pool mode and did not want to evacuate. My dad stayed with her so that the rest of us could eat, and even after that spell there was distinct reluctance. She sat with her feet in the water and generally splashed around on the stairs until it was time to go, and then:

"Anne, we have to leave now, Sweetie."

Her sundress-laden countenance was all Defiant, Sanctimonious Sass.

This was quickly remedied by Mike scooping her up against her will, skinny little legs and tiny feet kicking over his shoulder the whole while.

Mike and Tiffany: 2
Anne the Sassinator: 3

And then we come to the small side hallway where we were all jammed in, attempting to put on our sandals and say goodbye to my parents. I have to say, at the expense of my poor, cute husband, that this was my favorite part of the weekend. I can't remember the last time I laughed this hard...

Seated on the stairs in the hallway we have Henry. His thought bubble reads as follows:

"I haven't stopped talking for the past 20 minutes, but that won't stop me from asking a series of new questions about all of the stuff that is piled in this hallway! Hey, what's this?! It's a big, interesting-looking bottle with an enticing spray valve! I'm asking what this is, but before anyone can possibly answer, I'm going to hold it up and press it really, really hard!!"

Standing in the middle of the hallway we have adorable Mike, fielding a stream of questions from Henry, and momentarily distracted by Anne throwing her sandal in protest of her pool-abandoning fate:

He is cut off by an absolute CLOUD that has descended over the hallway, the epicenter of which is approximately his mouth. I'm standing at the top of the stairs with my parents trying to wrangle Anne into submission and I glance up to see Mike coughing and looking stunned. The offending spray that has currently robbed him of his ability to breathe?

Febreze. Henry had just Febrezed him right in the face.

I don't know that I would have handled the situation nearly as well as he did, because the rest of us started laughing so hard we were soon crying. There was something about that moment of Henry innocently holding up that can and poor Mike practically choking on aerosol odor eliminator that was ridiculously hilarious.

Mike, looking amused, and luckily with no loss of vision :0, recovered and was a heck of a good sport about the whole thing. I encouraged him to go outside and air out while I got Anne's sandals on. The entire 20 minute ride home I couldn't stop snickering, my eyes tearing up, as the overpowering scent of wildflowers permeated our car.

And then we went home, tossed Anne into bed, and drank a LOT of beer. Community Beer Works American Brown Ale, to be exact. Full circle right there, people!!

So, that was my weekend. It had it's ups and downs, but with my Mike by my side, all is always well. How was YOUR weekend, dear reader? Do write in to tell me all about it!
Posted by Tiffany at 12:43 PM