Today is my Henry's birthday... 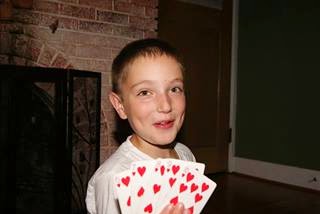 Time sure flies when you get old, yes? :0 By which I mean ME, not my son, who turns 9 today. It really doesn't seem like it was that long ago, but there you have it. I chronicled his birth story here before, for those of you who enjoy reading such things. I tried to keep the medical details to a bare minimum ;-) so it's a fun read.

I remember the aftermath of his birth and entrance into my life quite vividly. I was a new mother at 30 years old, and so I thought I was all prepared. HA! :) Right after he was born, I was SUPER EMOTIONAL about even looking at him. I just loved him so much and was utterly taken aback by the force of the bond I felt with him. I would look at the scrunchy little newborn photos the hospital photographer took and start crying. This went on for *weeks*, people. :0 Hormones - through the roof! I remember the entire first year being a bit of a haze while Mike and I adjusted to being new parents and realized that we knew absolutely nothing.

Henry was such a good baby, always loved to eat, that kid. His baby photos are all super adorable and chubby:

I remember being very relieved on his first birthday, that we had achieved a major milestone by making it through and managing to figure things out enough to keep Henry alive :)

So, contemporary Henry. He's looking handsome these days, isn't he? :) He looks SO much like Mike. It's hard to find recent pictures of him, he's pretty elusive, that Henry. His personality is very reserved (sound familiar? The apple doesn't fall far from the tree :0) and he's not a huge fan of having his photo taken.

I sent him to school today with chocolate cupcakes for his big day, and he seemed very happy and excited this morning for all of the special treatment he'd receive in celebration. He wanted marble cupcakes, but...well, you know that I'm not exactly a good baker, right? :) It's just not one of the gifts that God gave me. I'm a decent cook, but baking? Prepare to scrape cream cheese off of the ceiling once I'm done from an electric-mixer-out-of-control situation. I'm just not good at it. So Mike buys this boxed mix for marble cake, and one would think that would be pretty easy to make, right? One would think. :) I mean, it's already done for you. All I had to do was add eggs, water, and oil. Well.

There was also this little envelope in there of baking cocoa and so I tossed it in with the other ingredients. Because, you know. It's an ingredient. The instructions said to combine *the ingredients* into the mixer bowl. If I had kept reading, I would have seen that you needed to separate the chocolate into a separate bowl for the swirling that is involved in marble. Mixing everything together isn't exactly conducive to swirling.

Chocolate for everybody! It didn't seem to faze him a bit. So, cupcakes at school, and then Mike and I are taking him out to dinner to a restaurant of his choosing tonight. He picked a local steak house, and so that's where we're headed. I'm looking forward to it. Mike also picked up hockey tickets for him and Henry to go to a game next month, and we're giving those to him tonight.

Henry is a *really* good kid. He is pestering his sister about 95% of the time :0 but that aside, he is a very sweet and even tempered child who is a joy to talk to. I can't wait to see him grow up and the man that he will become, and that eventuality is looking closer every day.

Happy 9th birthday to my Henry!
Posted by Tiffany at 3:26 PM