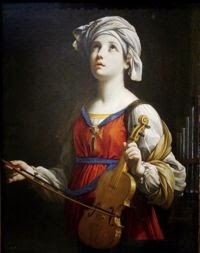 Hello all! Rather than from my normal perch during quiet spells on the reference desk, I'm blogging from my home office today. :) In a shocking development, the library that I work at is *closed* today, and that happens very rarely. Classes are cancelled at the university (another fairly uncommon occurrence) and so library administration felt it prudent to just shut down for the day. But again, here's the thing: there is *no snow* here. :0 We have a few inches on the ground, that's it. But so many faculty, staff and students live in the affected areas and are trapped in their homes that it seemed foolish to carry on as if nothing was happening with such glaring absences in personnel. And so I'm home today, with both children since Henry's school is also closed. Soooo...I don't have too much time to blog until my attention is demanded by a shrill voice elsewhere ;-) and thus let's get underway with November's edition of The Church Triumphant!

St. Cecilia is an ancient and important saint on the calendar, being one of the few mentioned in the official Canon of the Mass during Eucharistic Prayer I. She lived in the third century and wished to remain unmarried in the service of her faith. She was betrothed against her will to a non-Christian man named Valerian. Cecilia prayed that this man be converted, and that she might remain a virgin. According to tradition, Valerian saw a vision of an angel praying beside Cecilia. Subsequently, Valerian indeed was converted and baptized, along with his brother. Both men were later killed after being discovered giving proper burial to martyred Christians. When Cecilia saw to their burial on her own property, she was arrested. She was ordered to sacrifice to false gods and refused. For this, she too was martyred.  Yucky detail alert, which often seems to be the case in these early martyr stories :0 - when attempts to suffocate her failed, she was beheaded. Her tomb was exhumed in 1599, and her body found to be incorrupt.

Cecilia is the patron saint of musicians, and this is because a passage invoking "a hymn of love for Jesus, her true spouse" is attributed to her. In iconography,  she is always shown carrying an instrument of varying types.

St. Cecilia has a lot of personal significance to me, as she is my confirmation patron. I'm a cradle Catholic, confirmed in 10th grade, so I'm going to be honest: I wasn't at the most mature point in my faith at that time, and I chose Cecilia because I liked her name. I mean, my name is *Tiffany*. I don't hate my name, but I've never loved it. Admit it, you've read books in which a character named Tiffany was an airhead or otherwise stole the heroine's boyfriend, right? If it were up to me, my name would be Jane. Or Mary. Teresa would be lovely. Something Catholic and classic. :) Instead, I'm left defending the way Tiffany is allegedly derived from Epiphana and my feast day is the Epiphany. I mean...you understand, right? :0

I thought the name Cecilia was so feminine and pretty, and that's why I chose it. Years later, when my faith meant more to me, I researched Cecilia and found her story so intriguing. I loved reading about how brave she was, how dedicated to her faith. And I think that she had a hand in my adult faith formation, as I wrote about previously. Her late November/just prior to Advent feast day always seems to be significant in terms of faith developments for me. Coincidence? I don't think so. :)

I'm looking forward to her feast day on Saturday! Do any of you have a devotion to St. Cecilia? Detail in the comments. :)
Posted by Tiffany at 3:01 PM