My little Henry is 8 now, can you believe it?! Seems like just yesterday that he was born and I nearly became comatose from all of the sleep deprivation. Come to think, thank God he's 8 now. :0 And he's in *third* grade, and about to make his First Holy Communion May 3rd. My precious pumpkin!

Since he is enrolled in a Catholic school, Henry gets religious instruction every day. I have quizzed him on his understanding of the Eucharist, can't take these things for granted. :) He's excited about finally being able to come forward and receive, after so many years of waiting. Henry is very tall for his age, and a few times Extraordinary Ministers of Holy Communion have tried to give him communion, since he looks old enough to receive. I started encouraging him to wait for me back in the pew while I go forward to smooth out this problem. :) After all this time, he's very happy to move to the next step.

We read saint stories every night before he goes to bed, and many of them were devoted to the Eucharist. I always try to drive that point home when I read, especially if the featured saint was a child when they died. I'd like to take him to Adoration with me one day before the First Communion Mass, I think it would really solidify for him exactly what we believe about this sacrament.

And so, as the day draws closer, I knew there was one thing left to tackle: The First Communion banner.

I am not crafty. I can knit and crochet, but glue and felt are not my friends. And one of the things that the coordinator of religious education at Henry's school asks the children to do is create one of these banners, an artistic rendering by the child of their faith and the sacrament.

All I can say is thank God I have this blog and whine on it regularly, prompting a miraculous comment that there are kits out there that will come to my rescue. KITS. The religious education lady did not mention kits, gentle reader. She simply gave us a raggedy piece of burlap with photocopied sheets of letters and faith symbols that we could use to sketch and cut out our own shapes. I was petrified. I mean, can you *imagine* the mangled chalices and grape vines that would have resulted from this endeavor? And that would be from MY efforts, let alone Henry's, who has every POSSIBLE genetic scheme working against him with regard to artistic ability.

And so I ordered one of these aforementioned and blessed kits. The felt shapes are all cut out for you, you can just pick which ones you want to use and arrange them however you like.

And so Henry and I got to work Sunday afternoon. He got really into it, excitedly going through the symbols and choosing which ones to use. He arranged them all by himself, and even added some embellishments in the form of glitter glue, which did make things interesting at the kitchen table for a time:

"Why is there gold glitter in your hair? Oh. You guys are working on the banner."

And so, da da DAH!!! This is the result of our efforts: 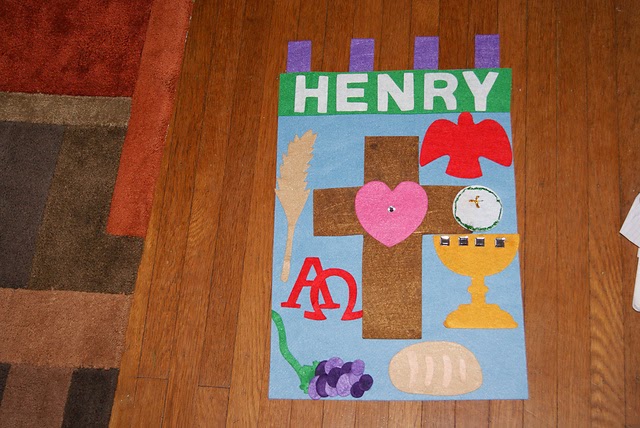 We just need to glue down the other side of those top pieces so that it can be hung. But I'm real proud of him, I think he did a great job.

We still need to get him a special outfit to wear for the big day, and I need to plan a little party for him. And a gift. He already has a rosary, that I gave him for his First Reconciliation. Other ideas?

All right everyone, I'm off from blogging tomorrow due to part 2 of my dental surgery. :( I will report in sometime on Thursday. But in the mean time, I'm sure I'll be on Twitter, acting all pathetic. Talk to you all then. Yay?