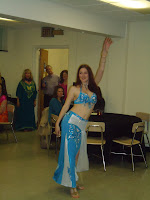 I'm still glowing. :) This was, by far, my favorite dance night ever. As always, I will chronicle...

Friday evening we had our regularly scheduled class, and aside from warm up, we devoted the entire hour and a half to practicing our choreographies. We have 3 group choreographies, and with a few members unable to make the event given family emergencies, we had to do what our instructor (Claire) calls "the kaleidoscope," switch our formations around to accommodate for the missing bodies. We did that for about an hour, and then Claire announced "Who wants to do their solo?!"

Well, here's the funny thing. We all did, because of course we each *volunteered* to perform a solo. But yet, when pressed, we'd rather die. If possible, it's even *worse* performing in front of your peers than in front of a gigantic group. Because you really, *really* care about their opinion. This makes you even more nervous than usual.

So we all took turns, looking like we were being marched off to the firing squad. One of my newer classmates, Amy, very cutely proclaimed that she was sweating, which I really related to. Because, well, I was too. :) As we moved through the solo program, I realized something:

I was having fun.

A LOT of fun, in fact. Each solo was totally unique, just like it's creator. Each had a distinct style and feel. Some used props (I'm still too intimidated to use props during a solo, but I'm hoping to change that soon), others didn't. Some were drum, others were kicky Middle Eastern pop music. Some were classic pieces, mine was a slow instrumental that my class coined "very saucy." By the end, we were all sweaty but in very good spirits. I just very much enjoyed seeing everyone else dance.

On Saturday, I was nervous but I dealt with it better than I have in the past. I'm definitely getting better at that (I think). I practiced in my new costume, which is a little long and making me anxious, so I pinned the front up a tuck where it could be covered by my silver hip sash thing. I was ready, so I tried to stop practicing. There is such a thing as "over practicing" I think, and I'm a master at it. :) You don't want to look too stiff.

I arrived early to practice the group numbers one more time, which is when I got more nervous. We were at a new venue though, and the dressing room situation was infinitely better. The place we usually have our haflas is ridiculous. We're all crammed into this itty bitty room right off the kitchen with no door. So we had to take turns using the little bathroom or a tiny shrouded spot that we concocted. Here, there were actually 2 rooms, so the performance group had our very own. There were windows, so we hung up a few silk veils over them and we were good to go.

The beginning of the hafla is actually cake for me now. I used to worry so much about the group choreographies, but now I really enjoy doing them. Which really makes no sense, because if you forget a piece of the group choreography, it's very noticeable, since you're doing something different from everybody else and you stick out. In a solo, nobody knows what you planned to do anyway, so you can just make something up. Yet the solo is what is most difficult for me. Because, you know, everyone is *looking at you*.

So, we did our group numbers, and they went just fine. Then we had a little intermission for us all to get ready for the solos. I put on my costume and commenced sweating. I was terribly nervous, and I was having that horrible "why did I agree to do this?!" feeling settling over me. But so was everybody else, so I was in good company.

Claire and her daughter (who is *awesome*) went first, and then took a short break to change so that they could video the rest of the performances. Or whole group was doing a solo, so we bunched up anxiously in our coverups out in the hall and waited. The solos were done in this very nice little room, different from where the group numbers were done, with tables and chairs where people could have a snack and a drink. It had a nice intimate feel to it, very much less "recital" like, and more "show" like.

Finally, we were ready to start. My classmate Karen was slated to go first, and I was after her. As she danced out, I took off my coverup and had a pep talk with myself in the hallway. What goes on in my head as I perform is always pretty comical. "Bold, Confident Tiffany" (who really doesn't exist) has a strongly worded dialogue with "Meek, Terrified Tiffany" telling her that although there are many things that she doesn't excel at (art for instance, *shudder*) she is a good dancer, and she shouldn't be nervous about people seeing her do this. As I fluffed my hair and did a last minute costume check ("is everything covered that I want covered? Ok, good") I realized something that really did make me feel better:

These are truly the best years of my life. I have a wonderful family, everyone is healthy, I have a job that I enjoy, and I get to thrive in activities alongside people that bring me joy. Since the solos were in a separate room from the other numbers, everyone who had stayed did so specifically to see the solos. And there were a lot of people there! People actually want to see me dance. I should enjoy and treasure this.

As I felt happy and reached this thought, I heard Karen's music end and she came glowing out into the hallway. My time was up; I had to go on. :)

I pasted on a smile, put on my "Stage Presence Tiffany" vibe and sashayed out as confidently as I could muster. I struck my pose and my music started. And...

It went GREAT. Really, really great. It was the best solo I've ever done.

Granted, there is still a lot of room for improvement, but I know that it's the best that I've ever been. Which made me feel HAPPY.

Mike was there, so I smiled his way quite a few times. Claire was smiling very encouragingly, which also helped. And as I finished up, I just felt very good about the number. And my costume looked smashing.

I breathed a sigh of relief out in the hallway, and then I got to enjoy watching my remaining 5 classmates dance. And I was so, so inspired by each of them. Everyone brought something different to her dance, and it made me actually *excited* to do a solo again. Next time, maybe I can wrestle with my veil or attempt a sword. I may even choose a longer song (I tend to stick to 2 minutes; keep 'em wantin' more!) and travel a bit more. The possibilities are endless!

Some of the soloists used the little staircase and went up into the table area up there, but there was no way I was ready to try that. I have a "graceful" reputation with my dancing (an extremely kind characterization that everyone kept relaying to me Saturday night, I think it comes from my ballet training) and I can't imagine it would be too graceful to trip and fall as I attempt to shimmy down the stairs.