Morning all! A lovely spring day for a dance recap. And speaking of the season and of the arts, Henry's spring concert is tonight. His class is playing the recorder. Cute! Beforehand, we are having tacos for Cinco de Mayo. Well, really that's just an excuse to have tacos. I put them on the menu nearly every Tuesday lately. ;-)

But for today, let's circle back to Saturday, and the big spring hafla at my dance studio. I love it when we have haflas, and we usually have two per year, one in early winter, and one in early spring. The spring is my favorite of the two, it just feels so festive and fun, and it usually kicks off our summer performance season.

I'm always nervous when I perform, and Saturday was no exception. It certainly has gotten better over the years as I've done it more, but the general nerves issue remains. Can't help it, it's part of my Nervous Nelly personality. ;-) Mike and both kids, plus my mom, were to be in attendance, so I really wanted to do a good job. I practiced my little heart out and hoped for the best.

I arrived at the studio in good spirits. We had three sets planned, and I was dancing in all of them. Four group numbers, plus my solo in the third set as well. I nervously got ready and chatted with my troupemates. There was wine in the dressing room, but I abstained. I don't drink and dance. ;-) I save that for afterward!

We opened the first set with an older pop number from our repertoire, combined with a newer drum solo. I did my best to think non-sweating thoughts. :) 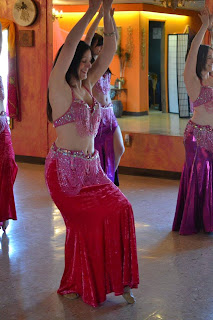 And you can see why. :0 It went well. I love our drum piece, it's my very favorite number, and when you love your music it certainly helps your performance. So, that was cake. Aside from when I almost forgot the choreography, but quickly moving on...

The second set contained our new Shaabi number with the glow in the dark paisley gowns. They glowed dutifully, and that number actually went great.  It's newer to us, so more room for error, but it went fabulous. And those gowns! It's like dancing in comfy jammies. :0 Oh my, if only all of our costumes were so comfortable!

Once that number was done, the panic set in. ;-) The third set contained both my solo and the dreaded new gigantic veil wrap choreography. I assembled myself in my bright orange and brown costume and awaited my fate.

My solo was the first piece in the set, so I had to be in Go For Broke mode, and I was. When my music started, it wasn't audible for a few beats while our sound guy fixed the volume, and by the time he fixed it, some of the opening strands of the song had come and gone. I made the split second decision not to ask him to start it over, and just shot out of the back curtain like a cannon instead, hitting the third accent in a running slide of a hip bump. :0 I beamed for good measure.

And it went well, it really did. I was still nervous, but overall it was the most relaxed I've ever felt when dancing solo. I think all of my work in improving my "face awareness/smileyness" factor bore fruit. ;-) I hit my accents as best I could, and really tried to keep my mind on smiling and looking out at my audience, rather than becoming absorbed in my movements and what I would do next.

When my final beat sounded, I felt happy with how I'd done; which is to say, I did the best I could, and we can't ask more than that from ourselves, no? :) I was relieved that it was over, to be sure, but I was happy. I curtsied and glided backstage to discover that the 4 minutes had taken their toll. To say that I was sweaty would be the understatement of the spring. :0 And I had the veil wrap situation upcoming, with fabric that shows any hint of moisture. This was not a good sign.

I did the best I could to resume my non-sweating thoughts, but it was far too late by that point. ;-) After a few other solos, it was time for Amy and I to twirl into our veil cocoon. Once we began the choreography and twirled out, the veil was a bit worse for the wear, but we disguised it well. :) Here we are, in post-twirling mode:

On the whole, it went good. Amy and I have to lift the veil aloft for other dancers to pass underneath, and our third set of passers dawdled a bit and the veil nearly took one of them out :0 so I grabbed the slack to get it taut again, and that worked. Mostly. ;-)

This piece was a trial run for summer festival season where we'll have much more room with it. But then we'll also be outside and there will be wind, so things could get interesting. We'll see how it goes!

So, another hafla done. They make me so very happy. Anybody else have a dance performance/recital coming up for themselves or somebody they know?
Posted by Tiffany at 2:26 PM