Anne's 4th birthday, & "Golden Girls" marathons, because isn't that what everybody does when they're sick?

Hi all! I'm reporting in from the sick wing today, as I'm home from work with a vicious cold. I'll come back to that, as it involves a story, naturally, but I thought I'd start with the happier news of Anne's birthday party this past Saturday. Oh gosh, in fact, it's just after 1 pm here, EDT, and exactly 4 years ago, I was about to deliver precious Anne.

Or: #gross! #TooMuchInformationTiffany! depending upon how you look at it, I suppose. But at any rate, we celebrated her miracle of life on Saturday with a family birthday party, complete with Frozen everything. Here we have the birthday girl:

...and posing with her birthday balloons: 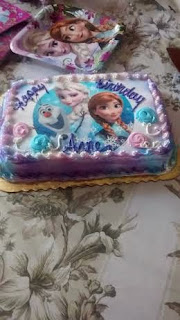 Notice the Elsa and Anna plates and napkins in the foreground? My mother would be responsible for those. :0

And the requisite shot of her blowing out the candles: 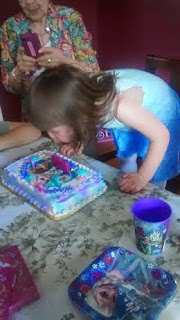 A lovely time was had by all. Unfortunately, Anne started a light cough on Saturday.

Overnight on Saturday we had some more coughing to contend with, and I administered a midnight soothe involving application of Vicks Vaporub, fetching of water cup, and reading of "Little House" story. Yesterday, she was definitely not 100%, and we had to contend with quite a few overtired and sickly temper tantrums. I also started to cough, and heading into the overnight Sunday, I was feeling decidedly nervous that we would not get a good night of sleep.

*Tiffany turns her bedside light off and begins to drift to sleep...*

Needless to say, I was not happy. I tossed and turned a bit, hoping that my throat would soothe. Mike was also being super soothing, trying to help me get comfortable, when IT happened.

Between her and me, there was NO WAY I was going to sleep. Mike promised to check on Anne, and I headed downstairs to the guest room, since I knew I would keep him up if I stayed in our room. I hacked down there with my Kindle for a time, and even from all the way downstairs, I could still hear Anne coughing sporadically. Eventually, I gave up. I figured I'd just bring her downstairs with me, and we could watch The Golden Girls while propped up on the couch. I trudged up to her room and opened her door. Hark. What is that smell?

This is that point that all parents ultimately come to, wherein we go into vast detail about some sort of vile body fluid oozing out of our children. Right. In this instance, it would be vomit. I hurried over and quickly discerned that from the chest up, Anne was covered with real mucousy vomit, which must have made it's appearance sometime after Mike had checked on her. I quickly got her up and out of bed, and mopped down. Mike blessedly manifested to strip the bed and begin the fumigation process. I got her all changed while Mike got her room back in order. But I knew she wouldn't be able to sleep right away. That's what The Golden Girls are for.

I adore The Golden Girls. It's my favorite late night TV guilty pleasure from my young adulthood when I could actually stay up past 11 pm,  and whenever I'm up in the middle of the night, I check the Hallmark Channel and it's usually on. Sure enough, Hallmark Channel to the rescue. A Golden Girls marathon, on until well past 1 am, after which time Frazier picks up the slack. Hot damn.

I got her propped up with me and watched no fewer than 4 episodes, all while Anne elbowed me in the ribs and stuck her feet into my vital organs into an attempt to get comfortable. Ah right, *that's* what it feels like to be pregnant again, check. We watched the episode wherein the girls hire a housekeeper named Marguerite, whom they fear has put a curse on them. The one where they are robbed, Rose gets all upset and paranoid, and Blanche says a police officer called her an "oldster." (that one is a personal favorite). Oh, oh, the one where Blanche meets this young stud named Dirk at a Jazzercise class, and then tries to transform herself into looking 30 again when he asks her out?

And BY THE WAY. Let me check the calendar...right, it's mid-May. I'll just have you know that The Hallmark Channel is advertising a week long marathon of Christmas movies, to premiere on July 3rd. We've moved Christmas anticipation back to May now? Good gracious.

Eventually, I coaxed Anne back to bed, since the two of us sleeping on the couch thing just wasn't going to end comfortably for either of us. Neither of us was coughing anymore, and I was confident we could get through the night at that point. I re-tucked her in and she went right to sleep. As did I, after a few more tosses and turns for good measure.

The only negative marring this touching scene is that she woke up this morning in a vicious mood and threw a 30 minute screaming tantrum about having to have a bath to wash the vomit out of her hair. Good times, right there. We watched more Golden Girls while I sipped at a full bottle of water to soothe my re-tickly throat (I own the entire series on DVD, so no worries on ever running out of episodes :0) and Mike showed the true nature of unconditional love and sacramental marriage by fixing lunch and sitting down with us to watch the episode wherein the girls are accidentally arrested for prostitution.

He even laughed at appropriate times, ensuring the accumulation of lots of Husbandly Bonus Points.

So, that's my day. :0 As I curled up into the fetal position, attempting to doze off earlier in the morning, I felt Mike approach:

"Oh. You're getting that fever rash on your neck again."

I already had to dance in public with that rash on my neck, haven't I suffered enough?!

So, YEAH, I'm looking a little rough today. Very feverish eyed and rashy, with curly, out-of-control hair. Hence, no video posts until this remedies itself. :0

I'm hoping I'll be well enough to go to work tomorrow, but who knows. How are you faring this Monday, dear reader?
Posted by Tiffany at 2:14 PM