Good day all! I'm coming off of an absolutely lovely Memorial Day weekend. Usually, I don't do anything special on Memorial Day. Parades? Too many people, potentially too hot. And it means leaving the house. And you all know how I feel about THAT. :0 But this year I wanted to go because our parish was hosting a float (Fr. Joe claimed he was "going to be riding on the Popemobile" :0), and so we went. I have to say, I'm so glad that we did. We ended up having to leave prior to seeing Fr. Joe *sob!* because Mike and Henry had plans to see the new Avengers movie and we were cutting it close to the time, but we had been there for an hour and a half, so we got to see plenty. We socialized with our grass neighbors, and I felt all community-spirit-like. Anne befriended a dog, all was good. 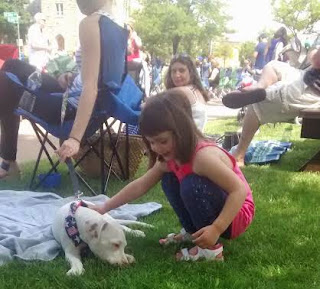 I also did a lot of knitting and crocheting this weekend. Henry has been requesting an alien stuffed animal for some time, and I finally got around to it. I have a photo. Brace yourselves. :0

He's very...bright. The yarn is actually neon green. I mean, it's perfect for an alien, right? It's just so...loud. And his eyeballs are just so...large. He keeps toppling over from the sheer weight of his own head. That ruffle at the bottom is supposed to be the same color at his body, but I ran out of green, so he got white:

"Honey, do you think this white ruffle makes it look like the alien is wearing a skirt? Should I take it off?"

Meanwhile, the next morning, I come downstairs to find the finished alien in Henry's arms while he watches television.

"Oh yes. But could you take off this white thing? It kind of looks like he's a ballerina."

I didn't want to say I TOLD YOU SO, but I thought in my head. ;-) So I took the ruffle off. But the head issue has gotten worse now that Henry has started tucking the thing under his arm to sleep. His neck is super wobbly. I need to come up with a solution for this. Suggestions?

I also started knitting a lamb for my desk, because I've wanted to do that for some time, and who doesn't need a desk lamb? I ask you. I have his body done, but his face is truly spectacular:

I mean, did you ever? I know he doesn't have any ears yet, and his body isn't attached, so the whole severed head thing is a bit creepy, but he's coming right along!

So that was my weekend. :) Lots of gardening, crafting and drinking of tea. It was wonderful. How was your weekend, dear reader?
Posted by Tiffany at 12:31 PM