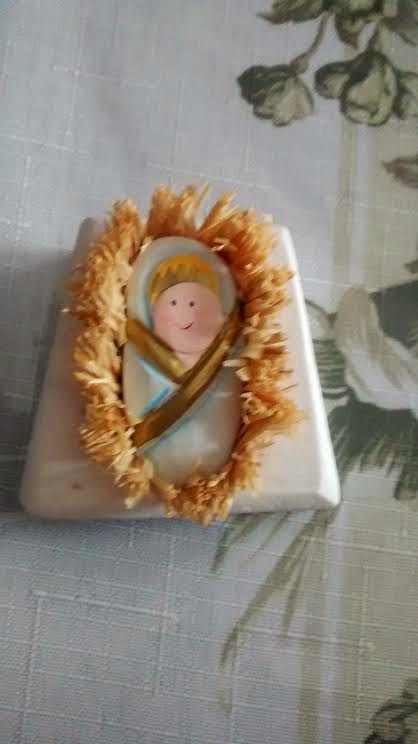 Happy Monday everyone! I'll be honest - my Monday didn't start out so sunny ;-) but things are better now and I'm feeling up to my usual writing fix for the day. This was a jam packed weekend of liturgical goodness, so let's get started!

Saturday was the feast of St. Lucy, and as promised, I got up to put some cinnamon buns into the oven. I have never made cinnamon buns before, even out of a tube, so I read the instructions very carefully. Apparently, my level of carefulness is directly correlated with unsatisfactory results, because the rolls came out overdone. Leave it to me to screw up processed cinnamon rolls, but there you have it. They were, however, still very edible, and the kids seemed to enjoy them quite a bit. I got out the St. Lucy book (I mention it, as well as a book on Bambinelli Sunday, which I will discuss below, back in my 7 Quick Post from Friday) and this year, Henry didn't seem too interested in reading the whole thing (it's certainly lengthier than your average picture book), but Anne actually sat for the story. I had to modify a few things in the retelling, :0 this is definitely aimed at slightly older kids, maybe in the 8 year old and up range, and I didn't want Anne to be scared. But I will say, I learned a *lot* of good stuff about St. Lucy from this book. For instance, Lucy's crown of candles comes from, not just her name, but a Swedish tradition in which St. Lucy arrived by boat, guiding the way with lights, during a severe famine. She brought wheat to the starving people, and hence that's why we make sweet rolls and breads to commemorate her feast. Good stuff.

We also read the Bambinelli Sunday book, and I was thrilled to see that Henry had brought a flyer home from school advertising that the school parish would be having an official Bambinelli Sunday Mass the next day. So, the children were invited to bring in their baby Jesus figurines to have them blessed during Mass. I was very excited and planned to go, but in the end, we decided to go to our regular parish since we had a bunch of stuff to drop off (Giving Tree gift and some clothes for the donation bin). However, I was all inspired, and insisted that both children pack up their Baby Jesus figurines for a blessing request after Mass for the Third Sunday of Advent: 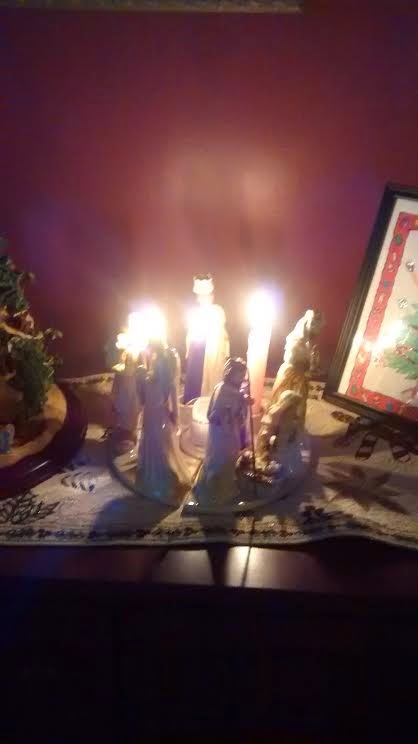 Anne was super excited about this and immediately got her Jesus ready, as was I. That's my baby Jesus up in the cover photo for this post. :0 Henry on the other hand...he's 9. He's entered this age where he's worried that everything he does is being watched and deemed embarrassing by others. While I sympathize, I think the child is far too paranoid for his own good. ;-)

So Sunday morning, we loaded up all our stuff, including three Jesuses. The kids put the gift under the Giving Tree while I found a pew. I was wearing bright pink in honor of it also being the Third Sunday of Advent, and thus Gaudete Sunday, when we light the rose candle.

Anne wore her pink furry boots in commemoration as well. :0 I tucked our Jesus figures into our pew for the end of Mass, so that we could ask our parish priest to bless them. Anne was pretty fidgety, and during the Gospel, asked to use the restroom. This is my lot in life right now, as mother to a 3 year old, so I took her back into the sacristy. While we were back there she spotted the children in the other room participating in Children's Liturgy of the Word. When we finished in the restroom, she asked if she could stay with them.

I thought she might not want to stay without me, so I explained that if she went, she had to sit like a big girl without me and then come back to our pew when they were done.

She hustled over next to another little girl, looking mighty proud of herself, and waved goodbye to me.

It actually was a nice respite for me to be able to hear the homily, and she came dashing out at the collection, bursting with happy energy. She declared that she wants to go back next week, so we'll see how this goes. She's younger than Henry was when he started going, but the enthusiasm is certainly there. She's getting so big. :-\

At the end of Mass, we got our coats on and hurried to the back with our Jesuses. Anne ran ahead and thus got to Fr. Jay before I did. I saw him hold out his hand to her, likely expecting her to shake it, but instead:

She slapped her Baby Jesus into his palm. He looked confused at first, but then I approached bearing two more Jesuses and explaining our request. He was happy to oblige. :)

So we left feeling contented and with three blessed Jesus figures. Anne eagerly deposited them back to their home nativity scenes upon our return. Another lovely addition to our arsenal of Advent Sundays. Just one to go before Christmas!

How was your Third Sunday of Advent, dear reader? Leave me a comment. :)
Posted by Tiffany at 1:20 PM

Email ThisBlogThis!Share to TwitterShare to FacebookShare to Pinterest
Labels: Advent 2014, Bambinelli Sunday, Catholic, Liturgy of the Word for Children, Mass with children