Advent calendar overload & who escaped from the nativity scene during the off season?! - First Sunday of Advent 2014...

Hello all, and welcome back! Not a totally happy thing, I know. Whenever I'm off for more than 3-4 days, even despite my utter adoration of routines, I dread going back to work. Because I've developed a routine at home, I suppose. Some habits just can't be broken. ;-) Although I tend to want to spend a lot of time on the couch knitting and drinking tea when I'm home, which, while fun, shouldn't exactly be a full time occupation.

But it was a lovely break. We had a lot of wine consumption on Thanksgiving, along with a slight stuffing shortage which resulted in a yearly panic attack by me. Why don't I ever remember this BEFORE making the stuffing?!

"HONEY. Is Dash's open this morning? We only have this one loaf of bread, right?!"

*Mike eyes me with caution*

We persevered. ;-) After that, we had some fun online shopping on Black Friday. Because God forbid I actually GO OUT to a store on that day, let's be serious.

We picked out a Christmas tree and brought it home on Saturday. Lovely, yes? Except that somehow our tree looked much more majestic in the lot than it does currently in the corner of our dining room. At home, it looks rather...squat. It is indeed full, but just much shorter than we envisioned. *I* had wanted a cute tree with a few bare spots that just spoke to me as having character. It was a bit of a Charlie Brown tree, but that's part of it's charm. I was outvoted, and so we live with the squatiness. I'll have you know that I didn't say "I told you so." But I wanted to. :0

And then yesterday was the First Sunday of Advent. Such bliss. This is one of my very favorite times in the liturgical year. And the evidence is in the sheer volume of Advent-related products my family and I own. I think the children's Advent calendars had a breeding situation going on because there seems to be a LOT of them this year, but we'll come back to that in a moment. This year I decided to get an Advent calendar of my VERY OWN, one in which *I* was responsible for opening the windows, no tiny, sticky hands allowed. I ordered it well in advance of Advent, but UPS was having a major shipping crises related to our storm from a few weeks ago, and so it didn't come until Saturday night. I was like an anxious dog in the living room all weekend:

But it came, and it's *magnificent*:

And then there's the nativity sets. I had them all organized this year to avoid the situation we had last year:

And so this year we have three nativity sets, all ready and arranged Catholic Librarian style, since I've been preparing for Advent since July. :0 Anne has a Melissa and Doug nativity set: 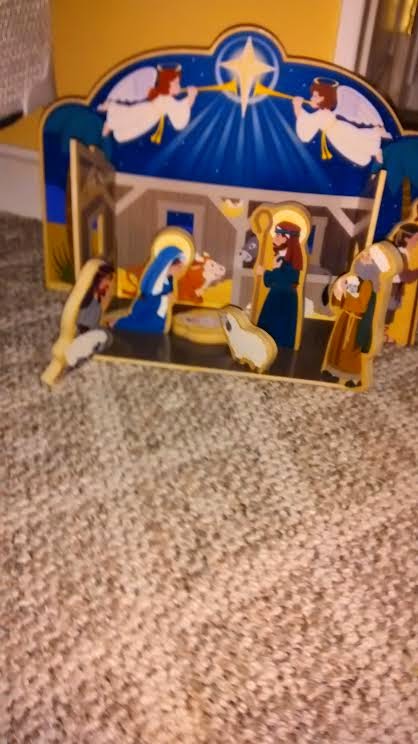 We set the 3 Kings up on a shelf, as they travel to meet the Holy Family: 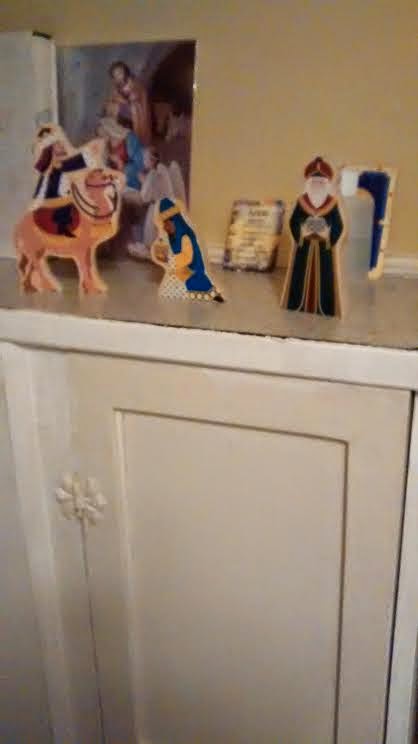 You can see her Advent calendar in the background there. Anne wasn't too happy about the 3 Kings not yet being at the festivities, but I'm making her wait. :)

Henry has his beautiful Fontanini set up, in fact he did it even before Thanksgiving, he loves this stuff so much. The apple doesn't fall far from the tree for sure :0 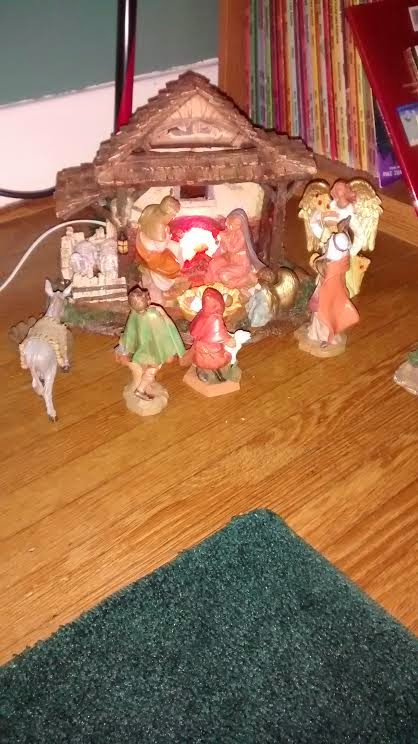 The Holy Family is super cozy in there with that fire going in the hearth. :) He also has a Bethlehem village collection started, we add to it each year: 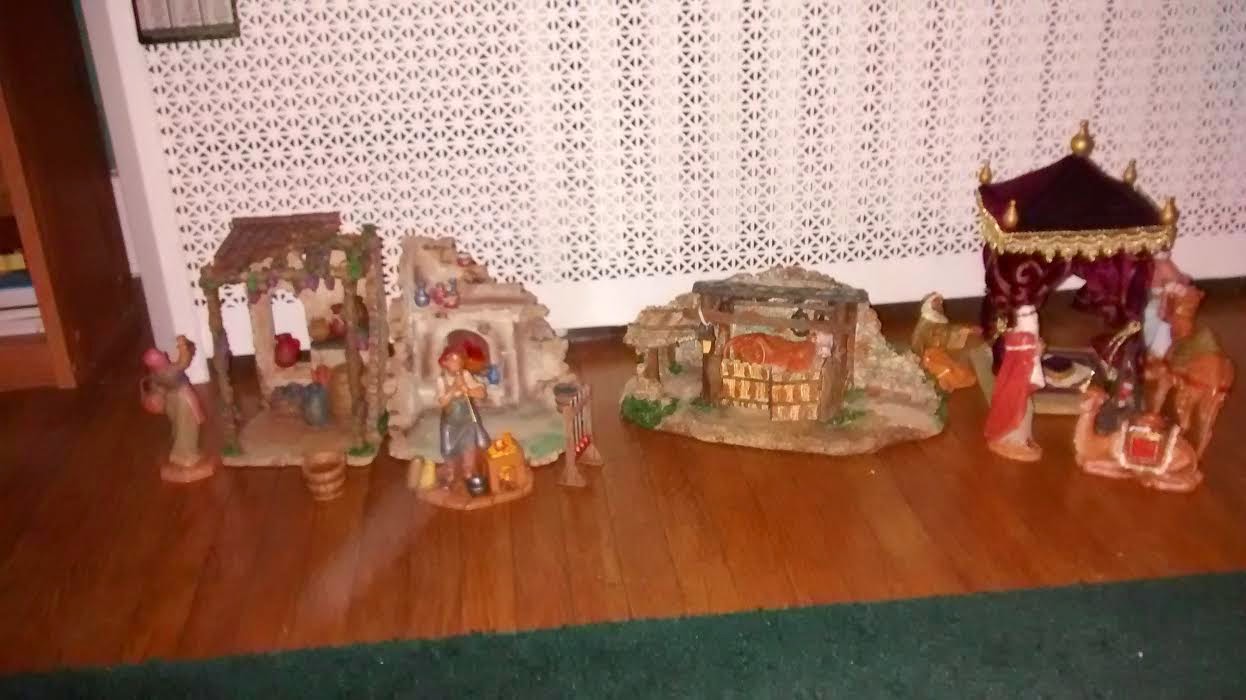 That's the Wine Maker's Shop, and the Glass Blower Shop, towards the left. Then there is the animal corral with an ox in it, he really should be over closer to the Holy Family. :) As well as the 3 Kings on the far right, who appear to be having a party of some sort in their tent with a small campfire lit outside. Hopefully, they won't delay for too long. ;-)

And last but not least, we have a new one set up in our dining room near the tree, this time without lending scandal, since St. Joseph is clearly present: 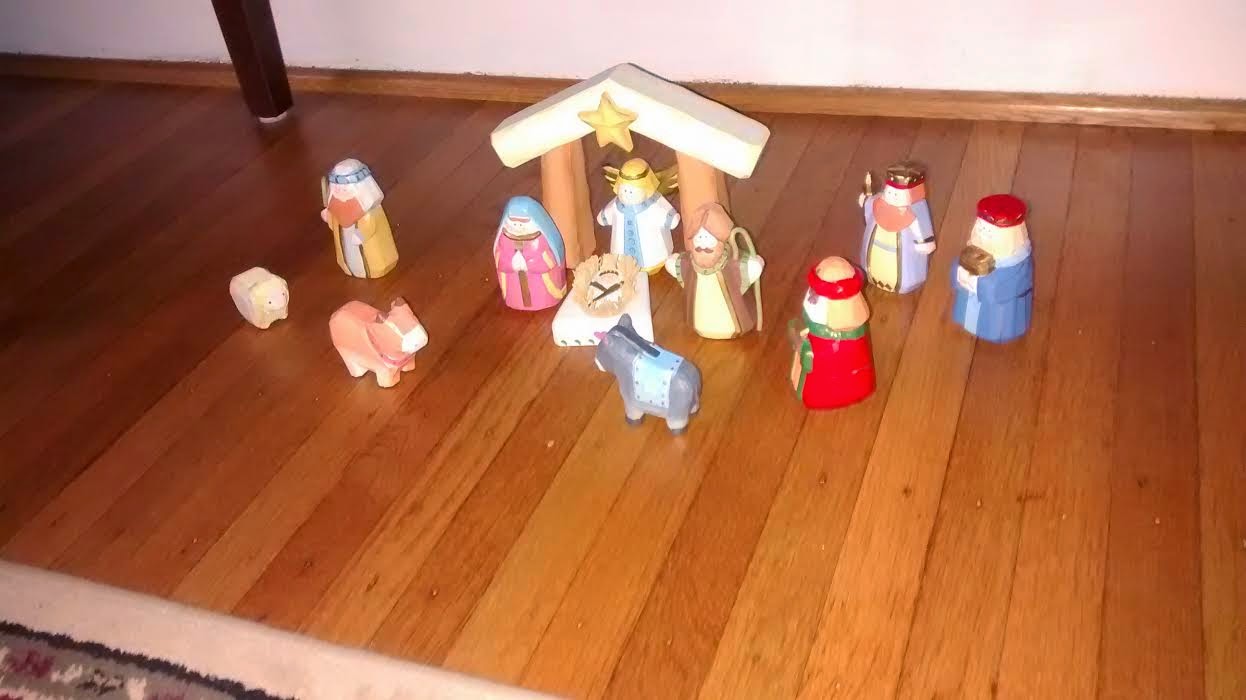 And of course, our Advent wreath:

Mass, as expected, was just beautiful. I wore a violet sweater, because I like to match the liturgical color during special seasons and I am a Catholic nerd. I tried to talk Anne into wearing purple, but she wasn't having it. Although once at Mass she was all excited, pointing the lit purple candle out to me, as well as what she calls our deacon's "scarf." Henry made note of the nativity set, since that is his area of expertise, and grabbed us a tag off the parish Giving Tree so that we can buy for another child this season.

For my part, I've been trying to keep up with my Magnificat Advent Companion (solid), as well as Morning and Evening Prayer (one slip up so far ;-)) and generally keep a spirit of reverence and expectation to my prayer life. I'm also praying the Immaculate Conception novena, which is just lovely. I don't have that one noted at the top as a separate blog page since it rather snuck up on me, but I'd like to pray a Christmas novena, and I'll post about that soon and include a page at the top for easy reference!

All right everybody, back to work for me. How was your First Sunday of Advent? Your Thanksgiving weekend? Do leave a comment. This week I plan to post about Christmas books, my knitting projects, and of course the upcoming feast of St. Nicholas! Do come back to join me.