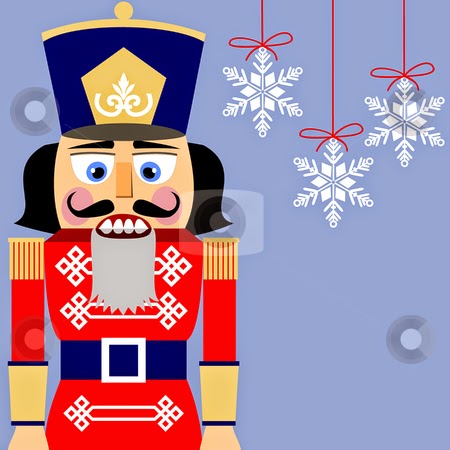 Ahhhh, seasonal festivities. Don't you just love those? I wouldn't call this an Advent tradition per se, but it's certainly a lovely event to get into the spirit of the coming Christmas season. Every year for quite some time now, I've gone to see The Nutcracker with my mom. Through the years we've seen a number of different ballets perform the piece, but we often seek out a local company who performs it each year in the Center for the Arts at the university for which I work. They do a really nice job with it, and keep the locations of the magical places Clara visits in Act II slightly different each time. I like the unpredictability of it all. :)

For the past two years, we've brought Henry along with us. So far, he sees The Nutcracker as "a play," hence it's OK for boys to attend, in his opinion. As if boys couldn't also enjoy watching ballet, but you know how these thought processes can work, sigh. At any rate, he really loves going, and I think part of the appeal is the lobby outside the theater, where collectible nutcrackers and all sorts of beautiful ornaments are on display and for sale. Each year he and I pick out a new nutcracker to bring home and add to our own collection, and usually an ornament for our tree as well. And we go out to dinner afterwards too, food always sweetens the pot. ;-)

This year, I decided to also bring Anne. At three and a half, it was a bold choice, but I figured: life is short. Why wait to start building those beautiful memories with her? Granted, I risk being in the ladies room for half the performance while Anne oohs and ahhs over the decor in there and/or throws herself to the ground in protest of heaven knows what, but I decided to live dangerously. We all got dressed up (Henry somewhat against his will) and headed out Sunday afternoon for the matinee performance.

It went pretty well. We got there *right* before start time (my mom drives sort of slow, but don't tell her I said that :0) and found our seats up in the front of the balcony. Anne seemed to find it pretty amazing that we were "up real high!" and I love sitting up there. So much easier to see well.

And Act I is my very favorite part of the show. I love the opening sequence set on Christmas Eve in the beautiful old house. The children dancing and the happy, festive music. The dramatic Mouse King segment. And finally the dancing snowflakes. Sublime! That part of the show is also shorter, and so it's also easier for the kids to sit through. There's a lot of action going on to keep them entertained, and the narrator explains everything. It's all very lovely. Anne was bouncing up and down in her seat, and kept asking "whispered" questions, so I had to field that and ask her to be quiet, oh, I don't know, 150 times maybe?

But, really, that's to be expected. And the matinee was packed full of other children, so I think the people around us understood. During intermission, my mom took Anne to see Santa and Mrs. Claus, and Henry and I shopped for a new nutcracker. We chose one adorned in red velvet, who is skiing. :)

Back for Act II, things was a hair dicier, but still manageable. Anne was now tired, and wanted to sit in my lap. She also wanted something to eat, and it took some convincing to settle her down out of that little situation, but all was well. The changing locations in Act II kept the kids interested for a spell, but I knew the Sugar Plum sequence at the end would be a problem, it is every year. :0

"Mommy. Are they ALMOST DONE?!"

She goes on a bit long, that Sugar Plum Fairy. And there isn't really a story anymore in Act II, we're just watching the dances set around the world, and the kids aren't as into that. Unsurprisingly, the Arabian dancer is always my favorite.

We had lots of bored fidgetiness to contend with near the end, but we got through it. We went out for an early dinner afterward, and they both ate like they hadn't seen food in days. Typical. :)

Has anybody else seen The Nutcracker this year, or going to see it before Christmas? Do chime in in the comments. :)
Posted by Tiffany at 12:56 PM