Hi all, and happy Tuesday! I promised to review our studio holiday hafla today, and though the focus of this blog isn't dancing, it's a huge part of who I am creatively, and so I force you all to read about it when inspiration strikes me. ;-) I love writing these dance posts because writing and dancing are both creative outlets for me, they are a very natural mix. And I'm certain (I hope) from reading this blog you can tell that I don't take myself or my hobbies too seriously - I do them because they are fun and inspire me creatively, and often provide amusing fodder to poke fun at myself. So settle in and journey along with me as the introverted Catholic librarian prepares to dance in public. :0

(Housekeeping Announcement - I don't usually have these types of breaks in posts, like the one right below this bracket, that ask you to click "Read More," but I had to for this post due to the file size of some of the photos. Sorry! And please do read more. :0)


Saturday night I arrived at our studio venue with my stomach jumping all around. I had four troupe numbers ahead of me, plus my solo. If you've been reading this blog for awhile you already know this, but for the benefit of new readers, it took me YEARS to work up the courage to dance solo, and though I've now done it over a dozen times, I still get nervous. Pretty nervous, have I mentioned that? I headed to our assigned dressing room, which is small, and with our troupe size growing, we were packed in there like sardines. Nervous + lots of people in confined space = sweaty palms, and I think we can all agree that this is not a good combination when one needs to wield weapon-like props, yes? :0

Weapons coming into play for our troupe Saidi cane piece, wherein we balance them on our heads and then spin them: 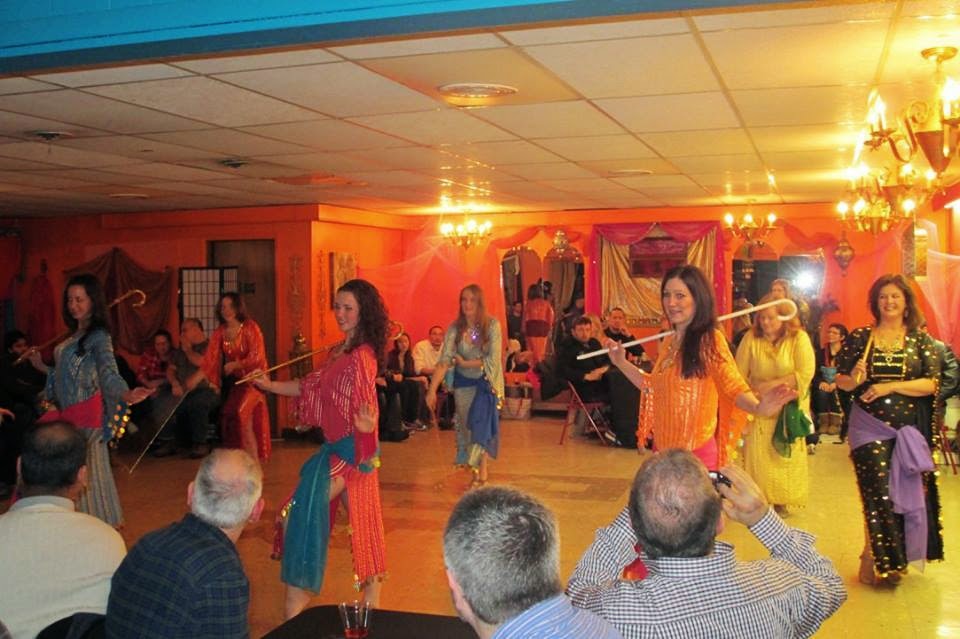 That's me in the front in orange looking anxious, because I'm worried about the twirling sequence to come. :0 And for my solo when I'd be dancing with a sword, but we'll come back to that one. The Saidi piece was first, and I was anxious because by time I got there all of the gold canes that we usually practice with had been claimed. These are wrapped in this textured gold foil stuff and adorned with plastic sparkly things, and someone nicknamed them "King Tut's pretzels" long ago and the name stuck. As it is accurate.

The texture helps them stay on your head better. With the pretzel canes claimed, I was stuck with a white sparkly one that didn't balance the same as the others and generally gave me a vibe that screamed "precarious!" Not exactly a soothing thing in light of my nerves. But I gave it my all and it went fine. No head injuries from accidental cane strikes.

Next up was our Shaabi pop piece, and it was slated for the end of the first half of the show. Claire wanted us to dance into the audience at the conclusion of our choreography and get people up to dance with us for the rest of the song. Ok, so see...

I like my audience, I really do. And I know that Middle Eastern dance is interactive between the dancer and the audience. I do my best to dance in the round so as to include everybody and smile at them winningly. But I don't actually want to (a) talk to anybody (introvert), (b) ask them to dance with me (scary!), and (c) have them actually dance with me (God forbid). No offense. :0 I was more worried about THIS part of my troupe responsibilities than about my solo.

When the time came, I sucked it up and did what I could. I tended to improvise next to a table for a few seconds and then flit around, not wanting to be pinned down by frightened-looking people, and I could see that my troupemates were doing the exact same thing. Someone sent Claire a clear "Send Help!" face, and she danced out, which helped. Then one of her students that wasn't performing that night, but was in the audience, came out to dance, and thank God, that seemed to open the floodgates. Whew.

But no rest for the weary. My solo was slated as the third number in the second half. I got ready and my palms sweated some more. Sword and I had a little talk, and he agreed that he was having a good day, practice had been going well, and so I was feeling as "good" about things as I could under the circumstances. I tested him out on my head a bit in the back (the ballroom dance teacher looked a little alarmed, but it couldn't be helped ;-)) and he was staying put well, so whatever was going to happen, was going to happen. I was as prepared as I could be, and had to hope that my practicing carried through to a good performance. I was more nervous than I wanted to be, more nervous than usual. Balancing adds that additional element, I think. The risk of public humiliation heightened, and all that.

I watched Claire dance as the opening to that half of the show, and I LOVE watching her dance. She is such an inspiration to me. She is just a beautiful and classy dancer, ballet-inspired in her movements, and I'm so grateful that she is my teacher. Then another class went out to dance and I got ready. I was holding my sword, and realized near the end of their song that this was a big mistake - my sword is *heavy* and now my hand was tired. Off to a roaring start. :0

And then my music was starting, so no time to think. I danced out. I did a tour of the room and then made my way to center to start working with Sword. I balanced it on my arm, which actually was much dicier than it should have been due to my nerves. :0 I took my time with it though (I have learned some lessons the hard way when it comes to performing) and it did balance, but it wasn't as secure on my arm as it should have been, and this is where improvisation saves my fanny every time: I just took it off and did something else with it, no worries! I balanced it on my hand, and then did a spin sequence with no troubles. Then came the music crescendo where I planned to balance it on my head. I have practiced this *many* times, it's obviously the most challenging part when working with a sword. It's easy to get it balanced in practice, but in performance? Whole 'nother ball game. But Sword and I had an understanding, and so...

...it stayed. :) It went very well, actually. People unfamiliar with sword dance often don't know what I mean when I say that I dance with a sword balanced on my head, so here are some (admittedly crummy, sorry no good photos this time) screen shots from a video someone took:

That's Sword and I from the back, my new holographic copper costume blinding everyone within a 10 foot radius. :0 And this is from the side, in a somewhat better photo:


It went great, it really did. I was nervous, have I mentioned that?! So I was a little concerned about bobbling, but Sword stayed true to his word. He stayed put like a champ. Once the sword was balanced, I have no idea what I did in terms of movements. I had some safe combinations planned, but no recollection of whether or not I actually implemented them, lol. I just improvised and did whatever came to mind. I was happy with my performance and have great memories from it. But I'm glad it's over. :0

After that, the troupe had a two dance segment of an instrumental followed by a drum piece. Both went very well, although my costume belt seemed loose when I was dancing despite having fit perfectly *the day before*. Costume worries give me hives.

And so there we have it, another holiday hafla in the books. I love my adventures in dancing, and I'm hoping that the troupe gets some performances booked for the winter. I will be reporting in!

Do I have any other fellow dancing (in any style) readers? Do leave a comment. :)
Posted by Tiffany at 3:41 PM