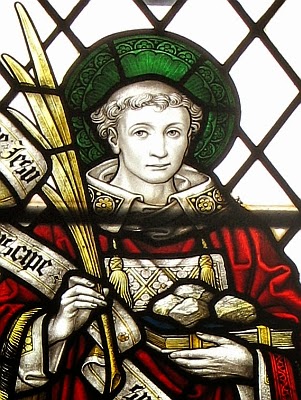 Afternoon all, and I hope that you are all having a wonderful Thursday. :) Me? Well, my day started off with a bit of an adventure. I left the driveway to head to work, my Fr. Roderick podcast happily playing in the background, and all of a sudden my audio started sounding like an alien spaceship was landing in the background. I have an old car, and thus an FM transmitter to listen to my iPod, so these types of occurrences aren't all that rare. :) Then, precious Fr. Roderick stopped talking altogether, and I looked down to see that my radio was off. Huh? I was pondering this surprising development as my car started making gasping noises and stalled. Uh oh, not good. I managed to coast around the corner and off to the side of the road to try and get it restarted. Let's just say that didn't go well. A phone call to Mike had him and Anne swooping in to rescue me, with a tow truck soon behind. Both Mike and the car shop guy think it's the alternator, but we're waiting for them to call with an official diagnosis. So, I'm at home waiting on the car, and I'm hoping that it'll be fixed today. Always an adventure. :)

At any rate, welcome to December's edition of The Church Triumphant! Everything is moved up a week in December (book club, this series) to accommodate the holidays, so the dates are off a bit. We usually do all of these posts in the 4th week of the month. But anyway, today I'll be discussing a saint  with an upcoming feast day - St. Stephen (feast on December 26th).

These Advent and Christmas feasts are so lovely, are they not? Now, I will grant you, St. Stephen isn't exactly an easy story to read through. This poor soul is known for his death by stoning by those calling his beliefs blasphemous, and he is the very first Christian martyr. A key part of his story is the presence of the future St. Paul in the crowd during all of this. Quite a dramatic scene that was, I am certain, especially since St. Stephen was praying for his persecutors as they were stoning him. You can see from the iconography in the photo within this post that he is portrayed as a deacon carrying stones atop his Bible. He is also shown carrying a green palm, which symbolizes victory. Martyrs are often depicted carrying palms for their triumph over the enemies of their soul.

St. Stephen's feast falls during the traditional 12 Days of Christmas, so we're starting that off on a powerful note. :) I keep emphasizing to my kids that Christmas is not a single day, but is an entire season. And each day within has special meaning. St. Stephen's feast day, to me, signifies trust. Total abandonment to trust in the will of the Father. Not an easy thing, to be sure. But also faith, hope and love. These things apply to many things in our lives, usually cheerier things like a wedding, but they apply to martyrdom and death as well. Certainly, these things were all swirling about in the mind of our Blessed Mother in the early days surrounding the birth of her child. How do they apply to each of us in our specific vocations and states in life?

The Second Day of Christmas, when I was a child, always seemed like a "letdown day." You look forward to Christmas Eve (our big extended family celebration) and Christmas Day (gift opening and general frivolity) for months, and then it's like someone just let all of the air out of your balloon with a fork. It's December 26th, and it seems like the only thing ahead of you is the longest part of the winter and going back to school. Of course, at that time  I lacked a full understanding of the Christmas season, not to mention maturity. Now I see December 26th as the beginning of a season of promise, with St. Stephen as our model in faith. We always have that, no matter what, and we're only just beginning (no matter our age) to discover what God has in store for us. What's not to be joyful about in that?

Who has a special devotion to St. Stephen? Do write in a comment. :)

I have a Christmas party tomorrow and won't be able to blog, but I hope that you all have a beautiful Fourth Sunday of Advent, and I will be reporting in first thing Monday morning. Until then!
Posted by Tiffany at 12:16 PM