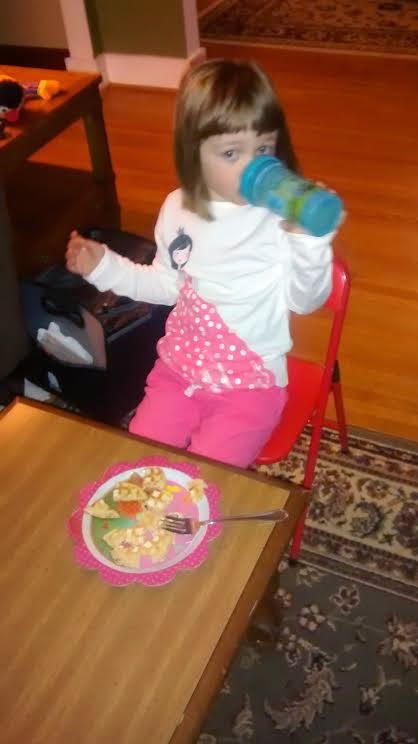 Little girls with sassy faces have been making things difficult for me of late. ;-) Let's chronicle, and I already have a GIANT mug of tea due to the fact that I am freezing my face off  in my office as the heat is not working. AGAIN. It seems to me that this happens every single year in the library as we move from autumn to winter, but who's counting?

At any rate, I had a beautiful weekend. We raked leaves and pulled up the vegetable garden for the season. We made tea and hot chocolate to keep the chill out. Every October, Mike and I watch classic scary movies leading up to Halloween, and this weekend we watched Alfred Hitchcock's Psycho. We made drinks and had a grand time. We also watched a bit of the World Series and some football yesterday.

Our daughter, however, at three and a half, is going through one of those spells whereby she suddenly is getting up in the night needing intervention. I remember going through this with Henry too. Our children seem to do the following with regard to sleep:

Year 1: They do not sleep. They nurse and wake frequently and I cry a lot.

Year 2: A switch is flipped. They sleep a normal night and I give thanks to God. *angels sing*

Sometime shortly before Year 3: Insidious fears creep in and they start to (a) refuse to go to sleep at bedtime, and/or (b) wake in the night crying, wanting to be soothed. I begin to wonder if I have done something to offend God. :0 Although much easier to manage than Year 1, after a year of getting normal sleep, it is difficult to transition back to the wakings.

And that's just how it goes. Sometimes, she only wakes once in an entire month. Other times, like what we're going through right now, she wakes every single night for weeks on end. And when I'm out of practice on this boot camp-like interrupted sleep thing that all parents go through, I feel so much more out-of-sorts when I wake. I'm dreaming, and suddenly somebody else's baby is there, crying. Dream Tiffany thinks "where did that baby come from?! Nobody was in this weird, ethereal building a minute ago!!" And then I realize that I am not dreaming, and that that baby is my very own real life toddler who is starting to get angry that nobody has come to her rescue yet.

Last night, Mike was the knight in shining armor by offering to get up instead of me. I hear him open Anne's door and greet her sweetly, and I then I hear:

Anne has this way of making you feel like she doesn't even know you if she's in a bad enough mood. :0 Mike soothed, and she was quiet when he left the room, but 10 minutes later...

I go in, and apparently the situation was quite urgent:

"MOMMY! Ernie has shoes on. How can I take them off?!"

Poor stuffed Ernie. Doomed to permanently wear shoes for all eternity. But more so than Ernie, POOR MIKE AND TIFFANY. It was over an hour before we were all back sleeping. And this morning she was an absolute *entity* of overtired, negative energy.

So, let's backtrack to Sunday Mass. She hadn't sleep well Saturday night either, so apply the above to 10:30 am Mass. :0 We are exhorted in the readings to love God and our neighbor, and so your beleaguered Catholic Librarian was trying to implement both. We had:
It was a LONG hour. :0 We did have one nice moment in which, after snatching the prayer cards I use as bookmarks in my Magnificat, Anne proclaimed that she loves the image of Our Lady Star of the Sea, which pleased me greatly. :) I needed the encouragement at that point.

We made it through, but barely. I'm hoping that this stage passes mercifully quickly.

How was your weekend dear reader? Leave me a comment. :)
Posted by Tiffany at 12:00 PM