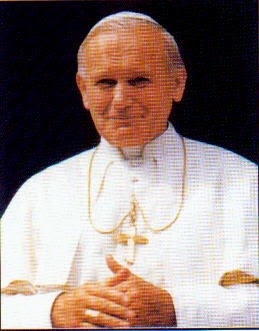 Happy Saint Spotlight Thursday, everyone. :) Today, I simply couldn't resist featuring my favorite Catholic of all time, Pope St. John Paul II, and with his new feast day being just yesterday, it seemed a perfect fit. Let's settle in with our hot beverages to kvetch a bit about JPII...

I've thought a lot about what I wanted to discuss with you in this post. The thing is, I don't even know where to begin to talk about his life, since there is so much ground to cover. And a simple Google search can do a better job of this than I could, really, since his story is well-known and appears in so many good places already. So I thought that I would focus on what St. John Paul II means to me. Because he means so very much.

I have written about him before, in a post I remember quite vividly from the days after the election of Pope Francis entitled "I'm a John Paul II Generation Catholic: the papacy in the life of your Catholic Librarian," and a lot of my thoughts are captured there, so make sure to check that out. :) It's chock full of emotion from a very emotional time, to be sure. I went back and re-read that post myself, so that I won't duplicate information, and so that I could really get a feel for what I felt compelled to convey at that particular point in time. What I'll do here is focus entirely on St. John Paul II's personal impact on my spiritual journey.

He was the pope of my childhood and young adulthood. When I came back to my Catholic faith in law school, I read about him and the Theology of the Body. I hadn't really paid him much mind until then, which would have been the late 90's. I was in my early to mid-20's, and suddenly I couldn't read enough about him. I remember visiting the bookstore of the Daughters of St. Paul in Manhattan one day after classes, and one of the sisters happily remarked to me that I must really love our Holy Father as she surveyed the items I had chosen: a book of his papal documents, and a rosary commemorating the upcoming Jubilee with a John Paul II centerpiece. I *did* love the Holy Father, I realized at that moment. I respected what he stood for, how he had maintained his faith throughout such painful times in his life, and remained such an inspiration to others.

By this point, John Paul II's health had deteriorated quite a bit. He walked in a very stooped stature and was showing the effects of Parkinson's Disease. And I thought to myself what a wonderful example he set. Aging and death await all of us. It's not a happy thought, but it's reality. And I know that the temptation is to want to avoid showing the effects of the aging process, and to avoid any form of physical suffering in the time leading up to our death. This is a very human and natural desire, to be sure. God doesn't ask us to *seek out* suffering. But to the extent that this is a natural part of the evolution of our lives, He asks us to bear it and to offer it up for the good of our soul and others. And John Paul II was certainly doing that with all of his heart.

Although my suffering was nothing in comparison to his, I related to John Paul II in this way. I had made a major life choice (to attend law school), and it wasn't working out the way I had hoped AT ALL. I was miserable. The environment was stressful and at times downright mean-spirited, and to say that I wasn't enjoying my coursework was the understatement of the decade. But I felt trapped. I had already invested so much money and time into this endeavor; how could I abandon it without at least obtaining a degree? It was a difficult time.

And during that difficult time, John Paul II inspired me. He bore what God was asking of him with serenity, goodness and love. I needed to be able to do the same thing with my much smaller cross. So I did. And in the end, going to law school was the reason that I met one of my best friends, Irena (who was baptized and entered the Church in 2011 as my Godchild *beams*), and it's the reason I found solace in my Catholic faith again. And THAT has changed the course of my entire life, for all eternity. :)

I continued to adore him well into my 20's, as I finished law school, moved back home and met some lifelong, wonderful Catholic friends, and began a legal career that I did not enjoy. I needed my faith more than ever during that stretch. By this point, I was in my late 20's, and getting the "what, no boyfriend?!" questions from well-meaning family. Please, don't ever say that to a single person. :) They either really enjoy being single, and there's nothing wrong with that, it *is* in itself a vocation, either temporary or permanent depending on the person's state in life and timing, OR they would like to be married but haven't met the right person yet. Either way, they really don't need that comment, which can sting. Been there, done that, sister. ;-) It felt like this strange time in my life, wherein I knew things would change, hopefully for the better, but I didn't know how or when. Disconcerting, to say the least.

Then I met Mike, and we got married. *heart* We requested a papal blessing for our wedding from Rome, and it is in fact from John Paul II. This was mere months before he passed away. We married in January 2005, and he died that following April. It still hangs, framed, in our dining room, and every time I see it I am reminded of how much John Paul II meant to my faith and life during such a crucial and formative period.

When he entered his final illness and we all knew that the end was near, I was newly pregnant with Henry. I remember being so grateful to have a new life in my womb as our beloved John Paul II's soul was leaving this earth. That felt significant to me, a sign from God, perhaps. He knew how much John Paul meant to me, and this was a goodbye present of sorts. :)

I very much love the two popes that have followed John Paul II, but none compare to the impact he had on my spiritual life. I have followed his canonization process avidly, and was thrilled when he was both beatified and canonized. A last fun fact: when John Paul II was beatified in 2011, I was heavily pregnant with Anne (delivered her later that same month), and Anne's birthday, May 18th is, da da DAH!!!!!!! The same birthday as Karol Wojtyla. :0 Coincidence? I think not.

Does anyone else have a strong devotion to Pope St. John Paul II? Leave a comment!
Posted by Tiffany at 11:33 AM